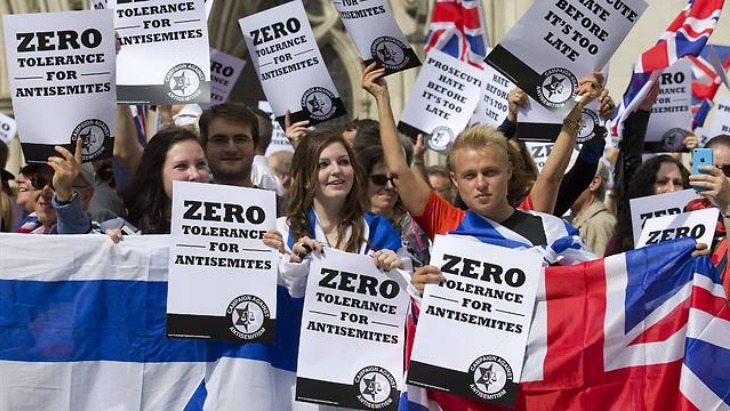 Thanks to Jeremy Corbyn and his cronies, British Jews have started to mobilize.

Two weeks ago I went to my local synagogue for the first time in 33 years. This was surprising, chiefly because I haven’t set foot in a shul in all this time apart from a couple of weddings and the odd bar mitzvah. In 2001, I had even gone as far as marrying a non-Jew.

Just as astonishing as the location was the fact I had gone to see a Labour politician give a talk about her experiences. But I was thoroughly engaged.

This is because gradually, over the past few months, both my political sensibilities and my sense of cultural identity have radically changed.

You may have heard that the UK has a problem with anti-Semitism on the left. This moved sharply into the mainstream when Jeremy Corbyn was elected leader of the Labour Party in September 2015. Corbyn described representatives of Hamas as “friends” when inviting them to a controversial meeting in Parliament in 2009. Just last year, footage emerged of him saying in 2013 that some British Zionists had “no sense of English irony.”

Now, in America, you have your very own Ilhan Omar, a Democratic congresswoman who tweeted in 2012 that “Israel has hypnotized the world.” Last month she told a DC audience, about Jews who support Israel: “I want to talk about the political influence in this country that says it is OK to push for allegiance to a foreign country.”

It’s a frightening trend on both sides of the Atlantic. And, in the two-party system that Britain shares with the US, there is a realistic chance that Jeremy Corbyn could become prime minister.

Under his leadership, the Labour Party has been splintering. In June, Luciana Berger, who is Jewish and a former shadow minister for public health, was hounded (while heavily pregnant) out of the party she called “institutionally racist.” Louise Ellman, the politician I saw at the synagogue, has been called a “Jewish Labour Movement b**h.”

American Jews have often seemed happier in their skins than we Brits, with Brighton Beach and Yiddish slang and bagels (we used to call them beigels — the shtetl pronunciation). You had Woody Allen and Jackie Mason, we had Warren Mitchell (don’t ask). You proudly stayed as Stein and Leibovitz, we changed quietly to Stone and Leigh.

But, thanks to Jeremy Corbyn and his cronies, British Jews have started to mobilize.

I have a friend in the media who puts it thus: “Jeremy Corbyn has made a lot of people who didn’t feel very Jewish, Jewish again.”

“The local rabbi tried to make me Jewish and failed. It took the leader of the Labour Party to do that.”

Being Jewish, of course, she has no sense of irony.

At the end of last month, I wondered on Twitter whether others felt the same. “I had always felt Jewish, but British first,” said @Gilana25. “Now it’s Jewish first. Makes me a bit sad that it’s come to this, but being Jewish is so enriching.”

Others have become Zionist for the first time. Laura Marcus, a charity worker friend told me: “I am fiercely pro-Israel now. Wasn’t bothered before.”

And I am among them. This past year I’ve been going crazy for the Israeli Netflix shows “Shtisel” (about a Haredi family in Jerusalem) and “Fauda” (about undercover Israeli forces.) Having not been to Israel since 1989, I want to return to the Start-up Nation, to sample the nightlife and the beaches.

Newly single, I am enjoying an online flirtation with a Jewish novelist from Chicago I met on Twitter. I am proud of my Jewish surname (I haven’t always been).

Right now I am listening to harmonious Simon and Garfunkel, which reminds me of guitars outside in the balmy air on a kibbutz in 1985. Until recently, my favorite musician was the discordant Elvis Costello, who happens to support the BDS (Boycott, Divestment and Sanctions) movement.

As I am writing this, a message from a Jewish friend pops up on Twitter.

“Will I see you in shul on Friday?”

The answer, most emphatically, is yes.

This article originally appeared in the Daily Telegraph

Miranda Levy is an online columnist for the UK’s Daily Telegraph.

The Western Wall: The Heart of the World
The Softball Player
How This 6 Generation Bread Baker Brought Back Israel’s Ancient Grains
Olivia Newton John’s Grandfather was a Nobel-Prize Winning Jewish Physicist
Comments