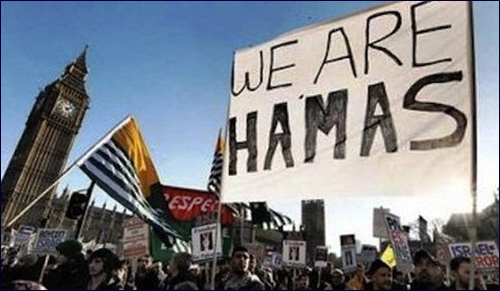 Nearly two thirds of British Jews are questioning their future in the United Kingdom.

Years ago, living in London as a graduate student, I confided to a fellow student that I’d been set up on a blind date with an Israeli. “How many Palestinians has he killed?” was his prompt reply.

Equating Israelis with murderers was still a social taboo when this exchange took place. True, there were the occasional anti-Israel marches through the streets, but calling an entire country killers was still considered rude; my fellow student apologized for making such a blatant, racist remark.

As anti-Israel sentiment grows, anti-Semitism is rising throughout the United Kingdom.

No more. Over the past several years, being anti-Israeli has become more and more the mark of a civilized person in Britain; opposing the Jewish state is increasingly a sine qua non, an essential hallmark, of being a considered “moral” person in Britain. And as anti-Israel sentiment grows, anti-Semitism is rising throughout the United Kingdom.

Britain’s press has treated the current war in Gaza not just as another piece of world news, but as something utterly unrivalled in its scope or horror. Blanket coverage and biased reporting have ensured that Israel is uppermost in the minds of people throughout the United Kingdom.

Israel ranks fifth in the list of countries covered by the Guardian, the influential British newspaper, whose Associate Editor said Israel “has no right to defend itself” and claimed as his personal goal the spreading of “revulsion” against Israel around the world at an anti-Israel rally in London in August, 2014. Britain’s Sky News characterized Israel’s goals in the Gaza war as “smashing and maiming, dismemberment and mass grief” and compared Israel’s actions to the bombing of Dresden and nuclear attacks on Hiroshima and Nagasaki.

Over at Channel Four, all pretext of impartial reporting was abandoned when veteran journalist Jon Snow cried on camera as he spoke of visiting children in a hospital in Gaza. “I can’t get those images out of my mind,” he said. “I don’t think you can either, because they’ve been everywhere. They are the essence of what is happening in Gaza.”

Of course, to an objective reporter it is Hamas’ provocation by firing thousands of rockets at Israeli civilians and its cynical use of human shields – Hamas headquarters are located in the basement of the Al-Shifa hospital that Mr. Snow visited – that are the “essence” of what is happening in Gaza. Mr. Snow, however, erroneously reported that none of Hamas’ rockets have hit Israel.

BBC's bias is legendary. This lack of context – in which Israel is seen as a bloodthirsty aggressor – often echoes classic anti-Semitic themes. The Guardian defended its decision to run a cartoon portraying Israeli Prime Minister Benjamin Netanyahu controlling British Prime Minister David Cameron as a puppet, even though it evokes the anti-Semitic canard that powerful Jews somehow control world leaders. An infamous cover of The New Statesman magazine depicted a Jewish star piercing a Union Jack, the British flag, under the headline “A Kosher Conspiracy”? Even the Lancet, the prestigious British medical journal, depicts Israel as a murderous provoker, calling Israel’s measured response to thousands of rockets being launched from within civilian sites in Gaza “the creation of an emergency to masquerade a massacre” of innocent women and children.

Such images have an effect. 41% of Britons say their opinion of Israel has worsened because of the current Gaza conflict, and more than half feel Israel has acted disproportionately.

Media messages and provocative statements also create an atmosphere in which egregious statements receive little or no protest; these in turn enter the public dialogue and further degrade people’s opinion of Israel. When Britain’s National Union of Students, in an emergency session called to debate the Gaza war, voted to boycott Israel, a member erroneously stated “Palestinian students are tortured and imprisoned” in Israel: in the echo chamber created by such anti-Israel rhetoric, no allegation is too outlandish to repeat.

Simplistic, one-sided views of Israel have also been on display in the massive anti-Israel protests in Britain’s cities this summer where Israel is slandered as the sole obstacle to peace, and routinely compared to Nazi Germany. Protestors in London waved signs saying “Well done Israel – Hitler would be proud”. Many placards are provided by Britain’s “Stop the War” coalition, which accuses Israel of bizarre, horrific crimes such as deliberately “slaughtering” pregnant women. Some protestors have chosen to identify with Hamas. Ignoring Hamas’ brutal imposition of Islamic law, its execution of political opponents, refusal to hold elections, its sending of thousands of rockets into Israel, and miles of terror tunnels dug in order to carry out attacks, protestors this summer have shouted “We are all Hamas” at rallies in front of Britain’s parliament and Israeli embassy.

Increasingly, anti-Israel sentiment is gaining official sanction. MP George Galloway declared that Israelis are not welcome in his constituent city of Bradford; MP Nick Ward, representing Bradford East, tweeted “if I lived in Gaza would I fire a rocket? – probably yes”. In Scotland, prominent figures have come out strongly against Israel: activist Yvonne Ridley has declared her intention to make Scotland a “Zionist-free zone”. Her message came ahead of decisions by governments in Glasgow and Fife to fly the Palestinian flag over official buildings in solidarity, a Glasgow spokesman said, with the “innocent victims” of Gaza – but not the innocent Israelis killed and terrorized by Hamas rockets. Scotland’s Deputy First Speaker Nicola Sturgeon has also come out as an opponent of Israel, speaking at an anti-Israel event in Scotland.

Anti-Israel protesters are now using bully tactics to create an economic boycott. When protestors gathered outside a Sainsbury’s supermarket in Holborn in central London on Saturday, August 16, 2014, calling for a boycott of Israeli goods, managers ordered their entire kosher section to be removed. A shopper who confronted asked why was told “because we support a free Gaza.” It wasn’t the first time a store gave into anti-Israel protestors: Ahava, an Israeli beauty company finally closed its Covent Garden location in 2011 after years of anti-Israel demonstrations outside its store, and 2014 saw the closure of Brighton’s Sodastream outlet after similar protests, and the decision by John Lewis to stop selling the company’s products. The Tricycle Theatre in London dropped – and then reinstated – its support for the annual UK Jewish Film Festival. The Israeli group Incubator was forced out of the Edinburgh Fringe Festival (though it eventually performed in Glasgow, Leeds and London).

Attacks on Jews in Britain haven’t reached the levels seen in France, where synagogues have been besieged and Jewish-owned stores firebombed. But anti-Semitic attacks have skyrocketed. July 2014 was the second worst month since records began, logging 240 anti-Semitic incidents in one month alone. Paul Morron, President of Glasgow Jewish Representative Council, has said “the level of anxiety is quite unprecedented.” That sounds like a typically reserved British way of saying that the community is beginning to question its very future in Britain. A poll conducted by the Jewish Chronicle found that nearly two thirds of British Jews are questioning their future in the United Kingdom.

British Jews are fighting back, though. Pro-Israel rallies are flourishing throughout the UK, and British communal life is thriving. Perhaps the best way to counter the negative feelings about the Jewish state is to embrace what is being attacked: to engage in Jewish life, to use Jewish and Israeli products, to remain strong in our commitment to Jewish life around the world and especially in Israel, the Jewish state.

With anti-Semitism on the rise around the world, what responses do you think people should make? Share your ideas in the comment section below.

Of Bombings and Hope

Ahmadinejad at the U.N.