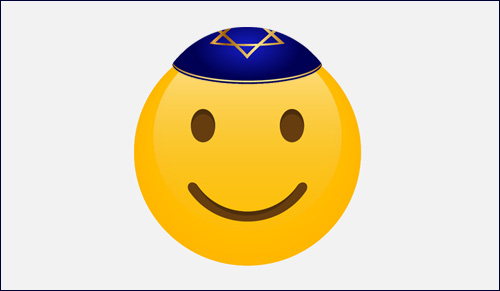 Don’t let your differing values cloud the desire to see the good in others.

We take the 2,000 emojis on the standard smart phone for granted, but emojis are apparently serious business. Finland recently became the first country to lobby the Unicode Consortium, the secretive Silicon Valley emoji gatekeepers, to have their national identity enshrined in graphic digital characters.

To do that, they first had to distill their 5.5 million person national essence into a smart-phone keyboard image. An exhaustive process resulted in Finnish identity being boiled down to four images.

After a months-long wait, the Unicode Consortium reached their decision last week: Finland’s national identity can now be tweeted, texted, or emailed from your smart phone in one of two ways, either a pair of socks or a sauna.

Which brings us to a millennial take on a biblical question: if you had to boil down the life of our forefather Abraham to an essential emoji, what would it be? If we had only one – or even a few – “freeze-frames” of defining moments of Abraham’s life, what would they be?

Would it be Abraham taking the hammer to his father’s idols, defying the prevailing polytheistic belief? Or, having left his homeland, would he be standing at the crossroads of civilizations, preaching a belief in One God and altering the course of history? Or would he be a husband, almost 100 years old, beseeching God for a child with his wife Sarah? Or perhaps he would be pictured during his ultimate test, grasping a sword, ready to make the sacrifice of his son, Isaac?

Jewish tradition has already asked this question, and the surprising answer resonates throughout history and provides an important contemporary lesson. In the Talmud, Rabbi Yohanan notes that Joshua calls the book of Genesis, the bulk of which is the narrative of Abraham and his offspring, Sefer Hayashar, inadequately translated as “the Book of the Straight” (Avoda Zara 25a).

Abraham’s defining character is most dramatically manifested in the way he treated those who disagreed with him.

Rabbi Naftali Tzvi Yehuda Berlin (1816-1893), dean of the flagship Volozhin Yeshiva, asks in the introduction to his commentary on the Book of Genesis: why, of all the adjectives available to describe Abraham, do we describe him as yashar, straight? And what does the adjective really mean?

Rabbi Berlin’s answer, channeling other traditional sources, is astonishing: Abraham’s ultimate praise does not lay in his piety, righteousness, or his powerful and singular relationship with God. His defining character is most dramatically manifested in the way he treated those who disagreed with him. While this behavior is illustrated in various ways in the winding narrative of Abraham and his offspring, it is most starkly demonstrated in the story of Sodom’s destruction.

Abraham was the man who, on the painful third day after his circumcision, paused a conversation with God Himself to run into the blazing sun and welcome in wayfarers he presumed to be idolatrous nomads. Eventually they revealed themselves as angels, and God decides to communicate through them His intent to destroy Sodom.

Sodom was a city-state that stood for everything diametrically opposed to the Abrahamic creed of “a generous eye, meek  spirit, and humble soul” (Avot 5:19). Guests were mistreated and molested, charity was frowned upon, the entire society was built on abject cruelty. When God told Abraham about Sodom’s imminent destruction, we would have expected the response to be great joy; after all, this was a big, dramatic win for “his team”. The flagship political entity that stood in Abraham’s way as he was spreading his faith in God and teaching loving kindness would be destroyed, never to pose a theological threat again.

But Abraham did not rejoice; he did the opposite. He begged, pleaded, wheedled, negotiated with God: please spare these people, perhaps they have some saving grace, maybe there are fifty, forty, thirty, twenty, even ten righteous men (Genesis, 18:16-33)?

True, Abraham hated what Sodom stood for, but that did not diminish his desire to see them live and thrive.

This is the Abraham emoji: a bold statement that while belief, faith, and values are seminally important and worthy of dedicating our lives to, ultimately what counts, what makes you a Yashar, is the ability to profoundly disagree with but still fundamentally value your political and theological adversary.

A humble soul has no categories determining with whom he can and cannot associate…he sits with all men. –Rashi

As Americans, as Jews, and as human beings, we are constantly choosing our emoji. Sometimes in the heat of a painful election cycle we temporarily change our emojis to the values that our side holds dear. Our emojis may come in the form of strongly held economic, social, and ideological dogmas. But Jewish tradition enjoins us to “be students of Abraham”, and have a “humble soul”, defined by the medieval commentator Rashi as “he has no categories determining with whom he can and cannot associate…he sits with all men.”

Let’s adopt the Abraham emoji. Let’s keep the values that have always motivated us, but don’t let them cloud the fundamental desire to see the good of the other, and even when disagreeing, to do so in a way that fundamentally affirms them.

Let us reaffirm that, with all due respect to Finland, our core national identity should not be a pair of socks, changed every day, but a permanent bedrock of mutual respect and common decency.

Rabbi Yitzchok Tendler, formerly a member of the faculty at Aish HaTorah in Jerusalem, now serves as Executive Director of Congregation Beth Jacob in Atlanta.

The True Legacy of 9/11
Scientific Curiosity and the Divine Encounter
Mind Over Milkshakes
Love the Convert
Comments
MOST POPULAR IN Current Issues
Our privacy policy
Aish.com Is Looking for Great Writers