A Torah Scroll for Rav Noah 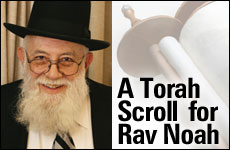 Our holy books teach that the number of letters in a Torah scroll is 600,000 – equal to the number of souls that went out of Egypt. Only when the Jewish people reached the level of 600,000 people did they become Klal Yisrael (the collective body of Israel). Every Jewish soul throughout history has its spiritual root in one of the souls of those who experienced the liberation from Egypt. Thus a Torah scroll encompasses and unifies all the soul roots in Klal Yisrael.

No man in our generation dedicated every fiber of his being to Klal Yisrael to a greater extent than Rabbi Noah Weinberg, of blessed memory. In his eulogy, Rabbi Nachum Braverman, an early Aish HaTorah student, compared Reb Noah to Rabbi Michoel Ber Weismandl, who jumped off the train carrying him and his family to Auschwitz, to arouse the world to execute his plan for bombing the tracks to Auschwitz. Few of us would have jumped off the train, said Rabbi Braverman, but Reb Noah’s love for the Jewish people was so great, there was no conceivable option.

Even on his death bed, wracked by pain, Rav Noah had no time for reminiscing with those closest to him about the path traveled together or reflecting on the past. He was still hatching plans to save the Jewish people and attempting to enlist those closest to him in the club of “ten men” to change the entire Jewish world.

“He was,” said Rabbi Yitzchak Berkowitz, “the biggest person I ever met.” His personal needs or desires never entered into his calculations – only the needs of Klal Yisrael, and he was unsparing on himself.

His message was: “take responsibility,” and he instilled in his students a desire to change the entire world.

Rav Noah taught that the phrase of our Sages “bshvili nivra olam – for me the entire world was created” means that each of us is responsible for the entire world. His message was: “take responsibility,” and he instilled in his students a desire to change the entire world. That spirit still pervades Aish HaTorah today. From the minute they walk through the doors, students are taught to think about how they can make a difference. “If you don’t have at least ten such plans in your head at any moment,” Rav Noah used to tell his students, “you haven’t begun to think seriously.”

First, he tried to get newcomers to think about themselves as members of the Jewish people, with responsibilities to the Jewish nation. Getting them involved in fighting for the Jewish people was crucial to that process. Aish students founded Hasbara Campus Fellowships to provide Jewish students with the tools to defend and advocate for Israel on university campuses. Honest Reporting, a watchdog against anti-Israel media bias, was another Aish offshoot.

Other Aish alumni have produced some of the most powerful and widely viewed documentaries on the threat of radical Islam, both worldwide and in the United States, and the danger of a nuclear Iran – all issues with which Rav Noah was greatly concerned in his latter years. For him, radical Islam and a nuclear Iran were the most urgent issues because without the physical survival of the Jewish people it is impossible for Jews to fulfill their Divine mission given at Sinai.

Radical Islam and Iran might have been the most urgent issues, but not the most important. Returning God’s children to Him would always be Rabbi Weinberg’s priority. Nothing brings greater pleasure to God than reuniting Him with His children, Rav Noah taught, and he did not stop thinking about how to do so.

Aish HaTorah’s Discovery Seminars proved themselves one of the highest impact tools ever developed for reaching large numbers of Jews. Hundreds of thousands attended the seminars, and almost 20% were well on their way to full Shabbos observance in follow-up surveys. He appreciated the potential of the Internet for good, as well as bad, and Aish.com is one of the world’s largest providers of Jewish content today, with hundreds of thousands of subscribers. Project Inspire enlisting thousands of religious Jews in providing examples of Torah as lived to those who have never before been exposed is a fulfillment of Rav Noah’s lifelong dream of creating not just an organization or an institution, but a movement embracing all Jews.

For him, it did not matter where the idea came from, whether it was his or someone else’s. If it offered the potential for reaching large numbers of Jews, Rav Noah was in. He provided seed money for dozens of organizations, despite carrying on his shoulders a huge fundraising burden and often debts in the many millions. When Lev L’Achim approached him with a plan for registering secular religious children in religious schools, Reb Noah gave them the quarter of a million dollars they needed to get started.

He had the ability to find the pintele Yid (the Jewish soul) in every Jew. External appearances never clouded his vision. One young man arrived in Aish HaTorah a Sufi Muslim, carrying the mat for his five-time daily prayers towards Mecca; another wandered into Aish after a seven-year journey sailing around the world in a two-person boat; yet a third told Reb Noah at their first meeting that he had been persuaded by his teachers at Harvard Divinity School that he should convert to Christianity. All became in due course teachers in Aish HaTorah or one of its affiliated branches.

Rabbi Weinberg sought to return every single letter to God’s Torah scroll. Over 100,000 people wrote to thank him for the impact he had on their lives and to offer their prayers, as he battled the cancer that would kill him. A beautiful Torah scroll has been commissioned and nearly completed in honor of Rabbi Noah Weinberg. All those “letters” whom Reb Noah brought back now have the opportunity to themselves write a letter in a sefer Torah in his honor on his third yahrtzeit.

Everyone is invited to participate in this special opportunity to dedicate the new Torah scroll in honor of Rabbi Noah Weinberg zt"l. There are various dedication opportunities available starting at $18. Those who contribute $100 or more will be inscribed on a special Roll of Honor in the magnificent Aish HaTorah World Center opposite the Western Wall and a dedication page in the forthcoming biography of Rabbi Weinberg by Jonathan Rosenblum. Visit www.rabbiweinbergtorah.com to donate.

Legacy of Wisdom
Don’t Believe in Other Gods Versus God is One
Seeing Without Eyes
Why Shouldn’t We Eat Whatever We Want?
Comments
MOST POPULAR IN Rabbi Noah
Our privacy policy
Aish.com Is Looking for Great Writers