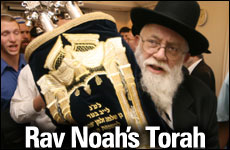 Rabbi Noah Weinberg connected to the Torah as “wisdom for living.”

The fourth yahrtzeit of Rabbi Noah Weinberg zt”l, will be marked this year by the completion of a new Torah scroll specifically commissioned in his honor. It is appropriate on that occasion to focus on one of Rabbi Weinberg’s major contributions to the Jewish people – his unique “Toras Chaim” (lit: “wisdom for living”) approach to Torah study.

Rabbi Weinberg’s most famous class was the 48 Ways, the Talmudic teaching (Avos 6:6) that enumerates 48 Ways in which Torah is acquired. Indeed the 48 Ways classes have been heard by tens of thousands of Jews and are among the most widely listened to set of classes in Jewish history.

One of those ways is in which Torah is acquired is “al manos la’asos” – “in order to do.” Rabbi Weinberg held that the full transformative power of the Torah is only experienced when two conditions are fulfilled: 1) remember what one learns, and 2) learn with the intention to apply that learning.

Rabbi Weinberg showed his students how to learn with the intention of applying their learning. Week after week, for over 30 years, he offered astounding insights into the weekly Torah portion – insights containing simple, easily grasped practical points of direct relevance to one’s life.

He would distill useful principles to apply to our lives.

Rabbi Aryeh Markman, the director of Aish-LA and a long-time student of Rabbi Weinberg, captured this aspect of his teaching: “I think one of the qualities that attracted so many of us to him was his ability to show you that the Torah was relevant no matter where you looked. Whether an obscure halacha, some forgotten story tucked away in Prophets, a completely ethereal argument in the Talmud – Rabbi Weinberg had a take on it. And he could distill out a useful principle we could take away and apply for the rest of our lives.”

The kinds of questions he asked generally required no knowledge beyond the Torah text itself and Rashi’s commentary. They were as easily grasped by a complete beginner, as by a Torah scholar who had been learning for decades, and equally relevant to both. All that one needed was the ability to think straight and a modicum of psychological acuity.

One of Rabbi Weinberg’s closest, early students, Rabbi Chaim Willis, described this method with great clarity: “View the Torah as real. The stories are telling you about real people doing real things. Examine the story and learn from it, just as you would from an event taking place in front of you. When considering a Rashi or a Midrash, take the information and consider it as really happening, then learn from it.”

Rabbi Weinberg said of himself, “One thing I don’t think I’ll be accused of in the Heavenly Court is of not having taken the Torah seriously.” He believed that the Torah held the solutions for every problem – and he searched the Torah for those solutions.

Here is an example of a question that Rabbi Weinberg asked:

The opening verses of Parshas Vayeira (Genesis, ch 18) describe how God appeared to Avraham on the third day after his brit milah. But as he experiences the Divine Presence, Avraham sees three wayfarers and runs to them, after first asking (according to one explanation in Rashi) God, as it were, to wait for him to attend to the guests.

From here our Sages learned that it is greater to receive guests than to receive the Divine Presence. Rabbi Weinberg asked incredulously, “Even an atheist would tell you that there is nothing greater than to be in direct communication with God (if they believed in Him). How can we understand this?”

Rabbi Weinberg learned from here a fundamental principle: There is something even greater than being in direct communication with God, something that brings one even closer to Him. And that is to go in His ways, to emulate His way of relating to the Creation.

From the slightest apparent irregularity in the order of the verses, Rabbi Weinberg could derive major lessons. As Yaakov awaited his dreaded meeting with his brother Esav (Genesis, ch 32), he prepared himself in three ways, explains Rashi: for war, by sending presents, and with prayer. Esav was still some distance away, asked Rabbi Weinberg, so why didn’t Yaakov first send presents, and only then make his preparations for war?

He answered that when dealing with an evil man, there is no hope that anything will avail unless it is clear that he is capable and ready to fight.

But even so, Rabbi Weinberg asked, shouldn’t Yaakov’s first response have been to pray? Isn’t that what religious people do first – seek God’s assistance and express their dependence upon Him?

From here Rabbi Weinberg extracted a startling principle. When a person is in a difficult situation, he has to know that it contains a message from God telling him that he needs to change in some way. Before prayer can be effective, one must first show God that one heard the message, that one is prepared to make the necessary changes. That is why Yaakov prepared for war – in order show that he had heard the message.

How Old Are You?

Not every question that Rabbi Weinberg asked was original. But even when the question was known, his answers were often startling in their originality.

At the beginning of Parshas Vayechi, the verse says, “And the time approached for Yisrael [Yaakov] to die” (Genesis 47:29). Whenever such language appears in the Torah, it signifies that the person mentioned passed away at younger age than his father. And indeed Yaakov passed away at 147, 33 years earlier than his father Yitzchak.

Why should Yaakov have been punished also for the question?

The Sages interpret that loss of 33 years as a punishment for having answered Pharaoh’s question, “How old are you?” – with a seeming complaint about how short and full of suffering his life had been (Genesis 47:8-9). But Rabbi Weinberg pointed out there are only 25 words in the verse. Only with Pharaoh’s question does the verse total 33 words. But why should Yaakov have been punished also for the question?

Rabbi Weinberg answered: Do you think that the first question Pharaoh intended to ask Yaakov was how old he was? He wanted to know: How did you raise a son like Yosef, who saved all of Egypt with his brilliance? How did you raise such sons as the rest of the tribes. But when he saw the way Yaakov looked, he could not keep from blurting out, “How old are you?”

For that question, Yaakov was punished. From here Rabbi Weinberg learned that a Jew must always strive to radiate happiness, vigor, a rejoicing in the gift of life from God – that no one should ever be provoked to ask what could possibly explain such a downtrodden appearance.

The Torah specifically tells us that the greatest character trait of Moses was his humility. If so, Rabbi Weinberg said, that trait should be manifest from the very outset of his mission. Where, however, do we find it?

He located Moses’ humility in the fact that when God first told him at the Burning Bush to return to Egypt and take the Jewish people out, Moses Rabbeinu resisted for a full week. Rabbi Weinberg demanded to know how could Moses have hesitated out of sensitivity to the feelings of his older brother Aaron? The Jews were in terrible suffering, in danger of sinking to the lowest levels of depravity in accord with their surroundings. By what right could Moses put his private concerns ahead of those of 2 million Jews?

Rabbi Weinberg used Moses’ demurrals as an example of what he called being “real” with the Torah – i.e. integrating it until one has no greater desire than to do what God commands. Because of his concern about Aaron, Moses had not yet made the command “real,” even though he fully understood intellectually how urgent it was that he return to Egypt.

But Rabbi Weinberg went further. From here we also see Moses’ humbleness. When he beseeched God to send his brother to be the savior of the Jewish people, he was showing the highest degree of humility possible. What he effectively said to God was: Nobody can do anything without you, so it makes no difference who your agent is. That being the case, it is not my merits that will determine the success of this mission, but Your decision that the time has come. So please let my brother Aaron be the agent.

What could a more fitting way to remember Rabbi Weinberg than with the writing of a Torah scroll whose each letter and word was precious to him, and from which he derived so much wisdom for living.

We Were All His Favorite