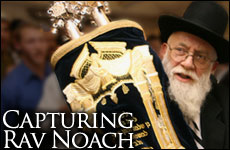 What was the essence of his greatness?

Ever seen a grown man cry?

Ever seen a thousand grown men cry? If you had been at the funeral of Rav Noach, you would have. Not to mention the thousands of women joining in the vast outpouring of tears, together with thousands more listening online.

His joy for life was massive and contagious.

What was it about this man that so deeply touched the lives of tens of thousands of people from all over the world, no matter their age, gender or religious background? How can we capture his essence?

Rav Noach was great in so many areas of life. He had seemingly superhuman wisdom; he had an uncanny way of knowing the answer to every life question. He cared about every person in a way they instantly understood they were in the presence of a man ly full of love and compassion. His joy for life was massive and contagious. He was a visionary like few others. He truly believed that we all can and must solve the world's problems – and he set his life course to do just that. And he demanded the same of all those around him.

He was a master communicator and a serial entrepreneur. He was a disciplined strategist, thoughtfully searching for solutions to break new ground. He was a once-in-a-generation leader, inspiring thousands to devote their lives to a noble cause while giving them the space to achieve their individual aspirations and even to make their own mistakes.

If we regular folk would achieve greatness in even one of these spheres, we would surely be famous just for that. But he, somehow, acquired them all.

How does that happen? How is it possible? Did he, as some venerable rabbis implied at his eulogy, truly belong to an earlier, higher generation?

To him, his accomplishments were not fantastic. What he found unbelievable was that we weren't accomplishing the same.

I'm sure Rav Noach would protest. To him, his accomplishments were not fantastic. And his proof? He did them! What he found unbelievable was that we weren't accomplishing the same. He understood the power of free will. He had integrated what our heritage teaches that God created man just less than Himself.

And therein lies the essence of his multi-dimensional greatness. He listened to God. He believed in God and he believed the words of His Torah. Sure, we all believe. He believed with a capital, highlighted B.

He was fond of relating the Medrash about the leading rabbis of one generation reaching the grand study hall in Heaven. To their surprise, there in the front row with Abraham, Isaac and Jacob and God Himself, on the first row bench, was none other than Shlomo the butcher! They, from their bleacher seats, object and demand an explanation. The answer soon comes: "He listened to God."

Nothing but the Truth

"Clarity or death!" was his battle cry. Truth was all that mattered and it inspired a generation of students to search for truth and to be willing to make painful choices for the truth they discovered.

But of course, the truth never really hurts. Truth and reality are always more pleasurable than illusion. One saw that in his face and it made it easier to follow that path.

If the truth is that God gave us a Torah -- the ultimate instruction manual full of the Creator's wisdom for how to live life to the fullest, then how could Rav Noach do anything but study it all day, fighting off sleep except for three hours a day -- for years?

And if the truth is that there are Six Constant Mitzvot that define the ultimate goal of existence, how could that no be a central element of our daily lives – even if the rest of the world was ignoring them?

And if Radical Islam threatens to destroy the Western World, how can we not be called to action. How can we turn on the TV or open a book and pretend it's not happening?

And if, as he wrote in a communication to his students, there exists in our time "a terrible profanation of God's name in the fact that a majority of the Jewish People deny the validity of Judaism and our charge of being a light to the world", how can that not become the overriding mission of each of our lives?

He was moved to action not because he was looking for excitement or because he had talents for outreach work. He was moved by only one thing: God's will. Assimilation was, and is, the emergency of our generation.

That simple willingness to listen to God and truly hear Him was Rav Noach's fundamental greatness. He wasn't distracted by social pressure, ridicule or superficialities. He never cared if a student wore black and white or red and green. But he always cared about whether that student was pushing to reach his or her potential.

And he wasn't deterred by concerns about his own adequacy. Where many might lament "How can I, one person, make a difference?", he would challenge, "If the Almighty wants you to succeed in changing the world, could you?" Torah obligates us to take action because we cannot fail if we truly try.

"When you are fighting for God's people, every effort is success."

Once when he returned from a fundraising trip I asked him if it was successful. He retorted "Every trip is a success. Some bring more money than others. When you are fighting for God's people, every effort is success."

Each morning he would thank God for giving him the clarity and the merit to fight the battle to bring back the Jewish People. The pleasure of being in that struggle was greater than any other. We quickly grasped the obvious: it's better to be striving to teach Torah to those unfamiliar with its wisdom, than to be Bill Gates. No competition.

In Rav Noach's presence, the reality of God was almost tangible. You only had to see him pray once to change your whole approach to prayer. It was like he was speaking with his old friend, his partner. He was really talking to God!

And being real means keeping your eye on the ball. I once asked him about whether I should observe a particular stringency in Jewish law. He zapped back, "Ephraim, if you're looking for stringencies, first be stringent in the mitzvah of Loving God, or Love your Neighbor."

He'd often state that you don't start living until you know what you're willing to die for. And once you decide what you'll die for, be sure to live for it. He would exhort us to spend 10 minutes a day contemplating what we are living for, to help us shake ourselves out of nonsense and into the higher meaning and pleasure of life.

Proverbs teaches that "The beginning of wisdom is fear of God". In Hebrew ‘to fear' is the same root as ‘to see'. Seeing God means you embrace the beauty of reality, instead of running from the fear of responsibility that comes with it. And only then can you begin to absorb wisdom.

Rav Noach saw Godliness and infinite potential reflected in every human being and that gave him intense love and compassion for all. Perhaps that ly altruistic caring is what we'll miss most. It was a purity of selfless love that one rarely knows except with parents.

Rav Noach taught us that we can get the job done.

No one forgets their first conversation with Rav Noach. His passion, his love of life was beyond the conventions of this world. His love affair with reality meant that he intensely felt what we all know we should be feeling too: he would experience joy at the birth of a child as if it were his own grandchild, he would feel deeply the suffering of his people, and he would be outraged if the government allowed bombs to fall on civilians without responding – as if the bombs were falling on his own house. The Jewish people's problems were his personal problems. He was, in short, a living model of what a Torah-true Jew is.

The world is a smaller place today without Rav Noach. We've lost someone who showed us the greatness that is available for a human who listens to God and His Torah -- and the greatness attainable to us all.

But if nothing else, Rav Noach taught us that we can get the job done. We feel the pain of his loss, but that loss has deepened in his students and admirers our determination to achieve what we know we can achieve, if we mean it.

Summary of Eulogies in English - text
The Promise Of The Land
Which Chat Are You On?: Parshas Behar/Lag Ba’Omer
Do You Like Slow-Cooked Food? Thank the Jews
Comments
MOST POPULAR IN Reflections
Our privacy policy