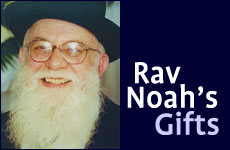 Hardly a day passes that I don’t crave his wise advice and loving care.

On the occasion of the 4th yahrzeit of Rabbi Noah Weinberg, of blessed memory, 11th of Shvat.

Has it really been four years since the passing of my beloved rebbe? My guide, my mentor, my role model... my hero? 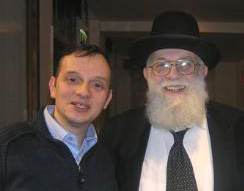 The author with Rav Noah, zt”l

Hardly a day passes that I don’t crave Rav Noah’s wise advice; his kind and caring input into my life. The knee jerk reaction of reaching for the phone is long gone, but the desire and the yearning for contact remain. Where can I go with my difficult questions? Where is the voice of sanity in a generation so confused and distracted? When I'm feeling lost, who can shine a light and point me in the direction of my own wisdom again?

I miss him so much and yet, permeating the silence that he left behind, I hear his voice whispering quietly in my mind. “The answer to all of those questions, my tachshit (jewel), is ‘you.’”

Someone once told me that a woman grows up when she becomes a mother; a man grows up when he loses his father. I lost my father, may he rest in peace, this year and I certainly understand what that means. Now you have to stand on your own two feet with no one left to support you. The safety net is gone; you’re on your own in a big world.

That’s in a material sense. In a spiritual sense, I believe you grow up when you lose your rebbe, your mentor. It’s time to stand on your own two feet. Like it or not, it’s time for enforced spiritual independence. And no one could have prepared me better for that than the Rav Noah himself. “Check it out” was his catchphrase. Don’t believe me, know what you know. If it doesn’t make sense to you, then disagree. If you don’t understand something in the Torah, question it. And don’t be satisfied until you have an answer. Never compromise one iota on truth.

Reb Noah gave me many gifts. Preparing me for life without him is perhaps the greatest of all.

“Give me clarity or give me death” – there was simply no in-between for Rav Noah. It was his unswerving commitment to sanity, and his utter intolerance of the opposite, that pushed his students to trust their own judgment and discover truth for themselves rather than rely on others to do so for them. He gave me many gifts. Preparing me for life without him is perhaps the greatest of all.

If I want to understand the influence he has had on my life, as one example of thousands, I need only imagine where I am today compared to where I would most likely be if Rav Noah had not decided to go into Jewish education.

As I look at my life today, I have a happy marriage. In fact, I have had the blessing of two wives (my first wife, may she rest in peace, passed away) with a total of 21 years of marriage under my belt and I am so grateful for every moment of it. I have 8 gorgeous, emotionally healthy kids, each of whom feels a deep commitment to our family and to the Jewish People. They respect me and look at me as their primary guide through life. I spend my life helping people, both practically and spiritually. I see that I have a role to play as part of the Jewish nation and I am proud to play my part as best as I can. Life simply couldn’t be richer or more fulfilling.

Now compare this to the path that I was on before Rav Noah influenced my life. I had no interest in anything Jewish. I had no interest in marriage or children. I wanted to make money and be successful, seek honor and power – and not a lot else. Of course this is hypothesis – who knows where life might have taken me – but if I had married, it would have almost certainly have been outside of the Jewish faith. If I had changed my mind and decided to have children, it would have been one or maybe two. Six or seven of my gorgeous children would simply not have existed were it not for Reb Noah. Wisdom would have meant very little to me and the goldmine of Torah’s wisdom would have been a tightly closed book. It gives me the shivers even to imagine.

I would likely have remained arrogant and narcissistic – as I was prior to my encounters with Judaism. And perhaps most painful of all for me to consider, the Jewish People, the nation that I burst with pride to be a member of, would have had no meaningful role in my life. It brings tears to my eyes to think how life could have had so much less to offer me.

I think that in his mind, I, and the thousands like me, represented the future of the Jewish People; leaders who Rav Noah taught that making a difference in the world is what matters; leaders who believe that the Jewish People can and must once again shine its light brightly through the world. Yes, Rav Noah cared deeply about me and about the tens of thousands he reached out to, but above all, he cared about the Jewish People. And he cared about them because they are God’s People. Because at the root of Rav Noah’s soul, like his forefather Abraham before him, he was purely and simply a lover of his Creator.

There is such a moving and powerful scene at the end of the film Saving Private Ryan. The men of a whole squad have given their lives so that Ryan might live. The squad captain lies dying and whispers to Ryan simply, “Earn it.”

I can never pay you back Rav Noah for what you’ve done for me. But can I ‘earn it’? I hope so and I pray so. Upon reflection, you taught me that with God on my side, for sure I can. I intend to try my very best to do so, and could not be more grateful for the opportunity.

My Thirst for Spirituality
Olivia Newton John’s Grandfather was a Nobel-Prize Winning Jewish Physicist
Don’t Believe in Other Gods Versus God is One
Seeing Without Eyes
Comments
MOST POPULAR IN Spirituality
Our privacy policy
Aish.com Is Looking for Great Writers