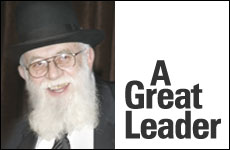 Like Moses, my father went out and saw the suffering of his people.

Great leaders are not born that way. The skills and traits of leadership are developed over time. There are many ways to learn how to be leader, but one of the most important methods is through the Torah – by tracking the development and actions of the greatest Jewish leader, Moses.

The Torah says: "It happened in those days that Moses grew up, went out to his brothers, and saw their burdens" (Exodus 2:11). Moses was raised in the luxury of Pharaoh’s palace. He could have been content with that comfort, but as he matured, he went out to share the Jewish people’s suffering. He even takes action that put his life in danger in order to help his people. And when there was a need to rebuke even his own brothers, he did it with both sensitivity and firmness.

As a leader, Moses proceeded through life by caring for every human being, and this quality is what made him fitting to be chosen by God to become the leader of the Jewish people. He always remained humble, showing tremendous gratitude for those who assisted him; even during the Ten Plagues, Moses did not strike the Nile River because it had saved him as a baby. Moses was a true giver, sacrificing his own needs for the sake of others. The warmth that he shared with his family knew no bounds.

This is just a drop in the ocean that the Torah teaches us about the level that one must achieve in order to become a truly great leader.

His sensitivity and love for every Jewish soul was incredible.

My father, the Rosh Yeshiva Rav Noah Weinberg zt'l, deserves the title of a real leader. As he grew up, he went out and saw the pain and suffering of his brethren – their spiritual pain. And he decided to undertake whatever possible in order to relieve that pain and help them return to the Jewish fold. He didn't wait for someone else to step up; he took the responsibility on himself. His sensitivity and love for every Jewish soul was incredible and he urged others to join him in the mission of tikkun olam and saving the Jewish people.

He was instrumental in creating a revolutionary baal teshuva movement -- reconnecting the Jewish people with our Creator. And everything he did with passion and humility, never looking for fame or glory. "Anyone who can do the job better than me can take my place," he would say.

He showed tremendous gratitude to anyone who did him even the smallest favor. He never forgot it even for years after. And he was totally devoted to his family – especially the great honor and appreciation that he always had for his wife – who stood by him all those years.

There is another aspect of great leadership: never giving up. The Midrash says that Pharaoh had Moses arrested and took him out to be beheaded. As the sword was coming down on Moses, he never lost hope, and miraculously his neck repelled the sword. Moses escaped and went on to lead the Jewish people.

I’ll never forget that time when my father was "only" sick with the flu. We thought it would go away fast, but it didn't go. We thought maybe it was because my father never took a day off, so we convinced him to take some time off to rest. But that didn't help. We tried different medicines, but he still didn't feel better. We went back to the doctors since we thought he might have a serious case of pneumonia. They sent us to take a CT scan. I will not forget that day that we received the results. The technician that handed it over to me said, "You should see a doctor very soon!" That was the horrible beginning.

We went back to the doctor and as he looked at the x-ray, his face said it all. Although doctors usually give bad news in a gentle way, my father insisted that he be straight with him. The doctor told us right away that it was cancer.

Typically, one doesn't take this news very well. But my father always believed that everything that happens is for one's good. Just as a son receives an order from his beloved father, he accepted the bad news without any words.

Although the doctors and consultants were very pessimistic, my father never lost hope.

The following days entailed more tests that were painful to both the body and the soul. We didn't get many positive results back. Although the doctors and consultants were very pessimistic, my father never lost hope. He said, "We do not give up and we do whatever we can and fight until the end." So a week later we were on the plane to the United States to consult with the best doctors we could find. We looked for hope, but the doctors gave up and said there was no chance.

On the day we visited the last doctor that we hoped might be able to help us, and he too refused to help, my father turned to me and said, "We have my grandson’s wedding in a few days. Why shouldn't we go back and celebrate with the family?" The minimal treatment that the doctors would give us in the U.S. was easily done in Israel as well. So we returned to Israel and went straight to the wedding.

But he never gave up. We met an Israeli doctor who deeply cared. He saw the iron will my father was prepared to summon up to fight this illness, and sent us out with a battle plan that none of the other doctors were willing to wage. With the doctor's honesty, courage and hope, and everyone's heartfelt prayers, my father merited to gain from the Almighty an entire year no one thought was possible. For that we are eternally grateful.

With all of Moses’ great leadership abilities, in the final analysis his greatest contribution is as a Torah teacher – Moshe Rebbeinu, Moses our teacher – who gave every Jew the eternal reward of performing God’s will. Moses taught the Torah to every Jew according to his level, and put it in the right words for every individual.

So too, our Rosh Yeshiva taught us to perform God's words with special love. Toras Chaim (instructions for living) was his method – and whoever wanted, he gave it with kindness, in the most pleasing manner imaginable. tailor-made for our generation and for each individual. The thousands of students who mourn his passing are testament to the power of his teachings.

Woe to us for losing such a leader.

Yehuda Weinberg is the COO of Aish HaTorah.

Kaddish for My Father