A Brief History of Bagels and Lox 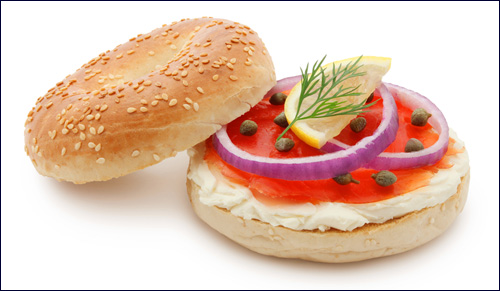 I’m spreading the truth. Call it a “schmear campaign.”

The word “bagel” comes from the German “beugel,” meaning ring or bracelet.

Of course, there are plenty of things that sound Jewish even though they are not. A Jew’s harp is a musical instrument but, despite its name, it actually is not Jewish. (I’m not kidding.) Anyway, a “Jew’s harp” sounds more like a Jewish mother who keeps bringing up the same topic over and over again. Kevin Mench and J.J. Putz are pro baseball players, but neither is Jewish. Of course, “Mench” and “Putz” sound like two Jews from opposite ends of the menschlichkeit (humanitarian) spectrum.

Bagels and lox, however, don’t just sound Jewish. They actually have Jewish connections. The word “bagel” derives from the German “beugel,” which means ring or bracelet, and some scholars believe that in the 1600’s the bagel was given by Jewish husbands to their wives as a gift for childbirth. Nowadays, a husband would have to be completely insane to give his wife a bagel as a gift for childbirth or for any other occasion. If a husband does so, he might as well give his wife a “Get” (divorce) too because she’ll be leaving him faster than he can say baker’s dozen.

Lox also has some Jewish connections. The word “lox” derives from the German “lachs” and the Yiddish “laks,” both of which mean salmon. Jews in Europe, beginning in Medieval times, elected to brine salmon and turn it into lox in order to make it last longer. Of course, there are things that Jews would not want to last longer, including slavery in Egypt, the Inquisition and bar mitzvah lessons.

Admittedly, the edible glue that holds our bagels and lox together – the incomparable cream cheese – is not a purely Jewish creation. But it still is vital to the trio, creating a delicious three-part harmony. One could argue that bagels, lox and cream cheese are the Crosby, Stills and Nash of Jewish cuisine. (Yes, adding a slice of tomato or onion would be the Neil Young.)

Scholars agree that we will never know the identity of the first Jew to slap salmon on a hole-y roll, or the motivation for the combination. This is unfortunate but, then again, we also don’t know which Jew deserves credit for creating chopped liver. (I’m sure the creator felt slighted by the lack of credit and constantly complained: “What am I, chopped liver?”) We also don’t know which Jew to thank for creating the kippah clip but it certainly beats having a kippah stapled to your head. (Am I the only kid whose parents did this?)

One thing I find strange is that bagels go swimmingly with fish but not with meat. While bagels and lox are ubiquitous, bagels and brisket are not. In fact, if you walk into a kosher delicatessen and order pastrami on poppy, you will be laughed at. (For the record, you also will be laughed at if you order corned beef on the cob.)

I do have one important question about bagels. If we refer to full-loaded bagels as “everything” bagels, why don’t we refer to plain bagels as “nothing” bagels? I think it’s because plain bagels would be way too offended, which I fully understand. How would you like to be told every single day that “you’re nothing”? (Yes, that is the story of my childhood.)

As it is, our bagels suffer enough humiliation from the new trend of “scooping.” When you ask for a bagel to be scooped, the plump and insecure bagel totally takes it the wrong way. The bagel thinks you are really asking: “Can you please slim down that fat bloated beast?” Sadly, this is exactly how bagel dysmorphia begins. If you then ask for thinly cut lox, the chubby bagels become even more self-conscious. For this reason, I believe those trendy, skinny flat bagels likely suffer from “yeasting” disorders.

Bagels also are traumatized whenever a bakery sells day-old bagels at a drastically reduced price. Isn’t it bad enough that bagels are made in the shape of a zero? If a bagel looks like and then is treated like a zero, how can it possibly have any self-worth? (Yes, the doughnut suffers similarly.) If you want to learn more about this issue, stayed tuned for the upcoming documentary titled “Shelf Life: A Stale Tale.”

I once considered opening a bagel shop but investors told me that they wouldn’t put a dime or even “pumpernickel” into such a venture. I was devastated and my friends had a tough time (cinnamon) “raisin” my spirits. I actually became very resentful and bitter about bagels. You could say that I became “sourdough” and, with respect sesame and poppy bagels, I developed a deep-“seeded” hatred.

Bottom-line: I’m now so anti-bagel that I may start spreading my cream cheese on something other than a bagel and I may even try to convince others to do the same. I’m calling it my “Schmear” Campaign.

Communication Breakdown
It Takes A Lot Of Faith To Be An Atheist
How Instagram Brought Back This Nostalgic Soup
What Makes Eli Run?
Comments
MOST POPULAR IN Jewlarious
Our privacy policy