A Beggar and a Man 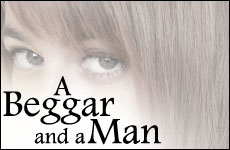 I've carried an idea of him in my mind. Who, for him, was the young girl with scorn in her eyes?

Though the day was young, the sun, already brutal, was climbing to the top of a faultless blue sky. My friend and I were walking home from the Kotel - in heat as dry and steady as heat blowing at us from an oven - and we'd gotten about halfway back when a wooden bench beckoned from under a leafy tree. There was really no rush – neither of us had anything more to do for Shabbos lunch - so we stepped aside for a little break.

After all these years in the Middle East, it still surprises me slightly that in this climate, stepping into the shade can be like entering an air-conditioned chamber.

It felt good to sit down.

A minute or so went by and we began moving languidly from thought to thought, in the un-self-conscious manner of old friends. We talked about her youngest son's new job, and the upcoming visit from one of my married daughters, and something I'd read in the paper that week - idle conversation as the spirit moved us. "You know what those are?" she asked, pointing with her chin.

Looking up, I became aware of all the yellowish-green oblong shapes, like elongated grapes, standing stiffly unripe among the branches - arranged not in pendulous clusters, like grapes, but singly, one by one.

"Figs!" I exclaimed, momentarily suffused by a small flash flood of memory. "My mother loved figs."

The two of us were still drifting in and out of conversation when across the street, coming up the sidewalk from over to the left, somebody's noisy, fast-stepping approach caught our attention. There were parked cars between us and the walker, blocking my line of vision, but in a few seconds a man vigorously pushing a baby carriage strode into view, and to my surprise (taken aback, confused to discover he had children) I saw who it was - a beggar I've been seeing around Jerusalem for the past 30 years, ever since I got here in 1976.

Whenever we cross paths, something within me cringes, repulsed, and I avert my gaze.

In almost the same moment, though, it became apparent that no, it was just someone who looked like him, sort of. The beggar I was thinking of is a really slow mover, indolent and sloppy. This man was taller and older, a father dressed in a normal Shabbos suit, and he was obviously in a hurry somewhere. (A particular minyan, maybe? Meeting his wife at the Kotel?) The beggar's a loner, with a slyly inappropriate way about him - at once evasive and intrusive - and he has always brought out in me (I'm ashamed to admit) a reflexive, instantaneous irritation and embarrassment, for two reasons: first, because he's just about my age - my peer – (Go out and work!) and secondly, because he comes dressed in chareidi (Orthodox) garb, and plies his trade not only among us, his landesmen, but among tourists, as well: a bad representative for Orthodox Jews. I've heard myself thinking, with visceral distaste: If tourists give you something, at least look them in the eye and say thank you! And Wash your clothes! You're a walking chillul Hashem (desecration)! Tuck your shirt in! Stop slouching around like that! Whenever we cross paths, something within me cringes, repulsed, and I avert my gaze. In all these years, maybe I've given him a grand total of ten shekels, or come to think of it, probably more like five.

Now that the father was passing directly across from us, I saw that the carriage was a double stroller, carrying two alert, pert little kids who were about a year apart. As he quickly continued on (a fleeting glimpse of his profile reminded me again of the beggar) he gave a decisive nod and a "Good Shabbos!" to a pedestrian coming the other way - a Chassid in black satin waistcoat and glossy-furred streimel, who politely returned the greeting.

My gaze was following him along as he walked, without my paying attention, really, when all of a sudden the father stopped in his tracks. With one hand still gripping the handlebar authoritatively and legs planted firmly on the sidewalk, he twisted around half-way and looked back in the direction from which he'd just come, lifting a forearm to shade his eyes.

This was the first good look I'd gotten of him.

It was the beggar.

Squinting with florid and furrowed brow, he now became visible: the messy, ill-fitting suit, sweaty with exertion, and a dirty shirt, its tails hanging out.

Whoever it was he was expecting, they didn't show up, whereupon he swung abruptly around and faced forward, throwing himself dramatically back into the march, hunched over the handlebars.

After around five steps, again he stopped, and turned, and searched.

A few yards more and he stopped and turned again, peering into the distance before pressing on determinedly.

Then he and the toddlers disappeared around a curve.

All the above took maybe a minute and a half.

My friend and I hadn't resumed talking yet when along the same stretch of sidewalk, giving off a majestic air of regal tranquility and ease, two women came strolling into view. It was Henny Machlis and one of her married daughters, on their way to the Kotel, and all at once I understood. Without explaining myself to my friend, I jumped up and crossed the street. "Henny!"

She and her daughter smiled and wished me Good Shabbos.

"You let him push your grandchildren!"

In Jerusalem, the Machlis family is a legend in our time: every Shabbos without fail, throughout the years I've lived here, they've opened their average-size apartment on Shabbos night and Shabbos day to anyone in the city who wants companionship, words of Torah from Rabbi Machlis, and a free Shabbos meal. Forty guests, fifty, sixty, seventy, week in, week out, the majority of them strangers, many of them longtime returnees, crowd into the Machlises' living room and sit on rows of plastic chairs, at folding picnic tables covered in white. College and seminary students, yeshiva bochurim, backpackers. All kinds of people, in any station of life. The secular and the holy rollers. The young, the old, the middle-aged, singles and couples, Israelis and Europeans, Russian immigrants, curious parents of baalei-teshuva visiting from America, yuppies and hippies, tourists and...apparently... beggars.

I've sometimes noticed myself inwardly reassuring my conscience that though I don't do what the Machlises do, I, too, host guests, but in my own way, according to the grain of my own personality. I like relating one on one, I tell myself. Crowds aren't my forte.

She'd put her trust in him, and it had transformed him.

Henny's brown eyes were shining and twinkling - happiness I attributed to what she'd just done. Then I realized that that's just her usual expression. Caught off guard, she gave a little laugh and ignored my remark, but I knew perfectly well, as a mother and grandmother myself, that it couldn't have been comfortable for her or her daughter. He must have offered, and they hadn't wanted to insult him or hurt him, and after all, he wasn't dangerous, just poor. In every way.

She'd put her trust in him, and it had transformed him to the extent that he actually looked physically different. I don't recall that he was smiling, but it was the first time I'd ever seen him in a good mood. Strutting along jauntily with a merry cockiness and a purposeful air, he hadn't shrunk from looking that dignified Chassid in the eye. He was a person like anyone else, doing his friends a favor, on his way somewhere.

I once heard Rebbetzin Tziporah Heller say that it doesn't matter so much where we get in life, as much as who we become in the process.

It was only an hour or so ago, while writing this, that something hit me: maybe that man has been aware of me, too, from afar, getting older through the years. I've carried an idea of him in my mind. Who, for him, was the young girl with scorn in her eyes in 1976, who later showed up with a husband, and eventually children, and grandchildren?

Why did he stop like that in the street, enacting a cartoon-like caricature of Family Man Waiting Impatiently but Good-Naturedly for Them to Catch Up - going through the same exaggerated charade, once, twice, three times? Because he'd spotted me on Shivtei Israel Street and worried that that woman on the bench (the one who's been looking at him askance as her own life passed by) might think he'd stolen someone's children. So he felt compelled to broadcast a signal to a cold, cold world: I'm not doing anything wrong.

And by the way, said his soul to mine, though I only heard it now, there's someone else you avoided, as well, by averting your eyes from me.

Smartphones and Kids: Harmful Effects and What to Do About It

My Escape from Child Abuse
Don’t Believe in Other Gods Versus God is One
Seeing Without Eyes
Why Shouldn’t We Eat Whatever We Want?
Comments
MOST POPULAR IN Current Issues
Our privacy policy
Aish.com Is Looking for Great Writers