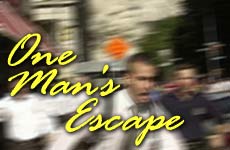 The following is my eyewitness account of the events of September 11, 2001 from the 73rd floor of 2 WTC, better known as the South Tower.

I arrived in my office at 8:35 AM and turned on my workstation. Within 10 minutes, at about 8:45 AM the lights flickered and we thought, "What was that?" Looking out the window, facing North, I could see smoke, debris and falling papers.

One of my colleagues yelled from across the room, "Go! Go! Get out!!" Many of us got up and quickly walked toward the fire exits. The stairs seemed like the only escape. I never did check the elevators.

We grabbed nothing, no computers, no palm pilots, nothing. All personal items were left behind and there was no turning back. We walked down about 15 floors to floor 58 when a fire marshal came over the intercom and said the problem is in 1 WTC, the North Tower. "An airplane has run into its side, but our tower was completely secure. Don't worry, " he added, almost sounding like he was suggesting that we should go back upstairs and resume work.

I saw a woman falling or jumping out of one of the higher floors.

Elevators were operating again. It's about 8:55 am and I continued to make my way down a few more flights to the 53rd floor. I moved away from the stairs and down a corridor as people were reassured by the fire marshal's comments. Some people made their way into elevators, some people turned around and went back upstairs, but I made a conscious decision not to go into any elevator.

My curiosity did get the better of me as I moved toward one of the North windows. I looked up at the burning North Tower seeing the fire, the smoke, the debris, the papers flying. I saw a woman falling or jumping out of one of the higher floors. "Oh My God! Oh My God!" people around me began to scream.

There were several phones in the office I was standing in, and people started to call loved ones. I picked one up and dialed my wife. The answering machine picked up and I said, "There is a problem in the 1 WTC, I'm sure you'll hear. I'm in 2 WTC and am perfectly fine. I'm making my way down." I then called my father and mother and gave them similar accounts and hung up.

Within 10 seconds of my call, my father watched the second plane hit the South tower. He believed it was all over.

My father thought I was still on the 73rd floor, and within 10 seconds of my call watched the second plane hit the South tower. He believed it was all over at that instant. I felt the impact of the explosion that I believed was at my feet. I heard the crashing glass around me as the building rocked. My hands began to shake and my knees buckled. I knew I could not stay where I was and I had to go lower. I made my way to the stairs, passing people along the way. I saw the horror and the fear in several faces as I went by them. I still believed the impact was at my feet and as I descended past floor 50 and floor 40 I was sure I was going to see disaster.

By the time I made it down 53 more floors I was sweaty and in shock. I came face-to-face with several firefighters and policemen who I believe were unable to make their way back through the wreckage. There was plenty of debris scattered across the concourse and the security guards were attempting to keep people away from any windows. The fate of all these building employees ran through my mind.

We were then guided through the concourse and asked to keep moving quickly. Down several escalators and up one more by foot we ended up on Church Street. I heard shouts, "Keep moving!" and I made my way up to Broadway, passing bloodied shoes and fallen glass. As I turned and looked up, I saw both burning towers. I was horrified and looked on in disbelief. I hung around awhile longer, hoping to see any friends and colleagues. I saw nobody I knew.

It's about 9:50am now, and in less than an hour I was down from the 73rd floor of the building. I saw several video cameras, people crying, asking questions with few answers at this point. As I moved north toward City Hall I watched in disbelief as the South Tower tumbled to the ground. This was the same building I heard a fire marshal say was completely secure less than an hour ago. As the tower came tumbling down, the debris and smoke came billowing down the street and I found myself charging up Center Street.

I slowed down my pace once I knew the smoke was well behind me. I stopped to call my wife at a payphone with seven people in front of me. When it finally came my turn all I got was a busy signal. By the time I reached Houston Street the North Tower was collapsing. This was inevitable after watching the first one crumble.

By the time I reached 14th street I stopped to hear a news report over the radio. It was the first news I had heard. As I listened for less than two minutes, my eyes began to swell and I began to realize how my life had been spared. I kept my walk going northbound towards the Upper West Side where I live. I stopped several people on the street with cell phones to make my phone call home, but no calls would go through. One gentleman asked me my name and said he would continue to hit redial until he got through to my home.

It wasn't until I reached 28th street that I found a pay phone line short enough to wait on and call home again. This time my wife, Debra shrieked as she heard my voice, "Oh my God, Jack! I can't believe you're alive! We all thought you were dead. Don't stop for anything -- don't talk to anybody. Just keep walking home!"

I thank God that I am alive.

Jack Alvo can be contacted at: lirrtrain@mindspring.com

Mel's Teshuva, and Ours
The Blue Beyond
Great Place to Live
Is Eating Supposed To Be Spiritual?
Comments
MOST POPULAR IN Current Issues
Our privacy policy