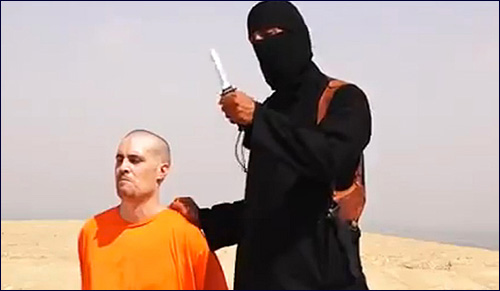 How can I be of the same species as the person who saws off a man's head with a 6-inch knife?

Growing up in Toronto I had a tough time imagining that there was a country called the Soviet Union that existed behind some impenetrable iron curtain where innocent civilians lived in fear, held captive by a regime that robbed them of their basic liberties like freedom of press, speech, assembly, religion, conscience, travel, emigration, and property. A government responsible for the death of tens of millions of people who Ronald Reagan called "the evil empire."

It was like the good guys versus the bad guys in Stars Wars, but for real.

I was unsure of the reality of God's existence, but I was equally uncertain of the reality of evil. I was a naïve, sheltered teenager, unable to square the reality that seemingly normal people were capable and willing to murder six million Jews. How could people perpetrate such heinous acts? I remember my father sitting me down before I left home for the first time to study in Israel for the year, and telling me, "Be careful. There are bad people out there." He knew I had a lot of learning to do.

Well I’m no longer so naïve. A cursory look at world history and Jewish history gives ample evidence of the evil man will do. Even one day’s worth of news will suffice. There are plenty people right around the corner from where I live in Jerusalem who would gladly butcher me, and even more a few miles south in Gaza, and even more across the globe.

But there are still times when I am utterly flabbergasted at the sheer monstrosity of evil. That's how I felt today reading about the horrific beheading of journalist James Foley by an ISIS militant. What kind of person can saw off a living man's head with a 6-inch knife? How can he and I be of the same species?

Yet we are. God created human beings with free will; we can do incredible acts of heroism and kindness, and we can do unspeakable evil, harm and degradation. Good and evil are two sides of the same coin. And an educated person with a proper British accent can use that power of choice to decapitate a fellow human being.

How are we to respond to such evil?

The first obvious step is to recognize that it exists. We cannot fight evil if we don’t acknowledge it. The world expressed outrage at the gruesome beheading of James Foley. No one tried to temper the monstrosity of the act or offer mitigating reasons to understand the ISIS murderer. The same clear-eyed abhorrence needs to be expressed at Hamas’ sheer evil of using innocent children as shields in the attempt to kill Israeli citizens. Call a spade a spade; Hamas is sacrificing their children and women, and that is evil.

Secondly, we need to fight against evil. It cannot be tolerated, it cannot be accommodated. Being moral means not remaining silent in the face of injustice. We need to stand up to evil and eradicate it. This applies to the individual who sees the bully at school, the domestic violence next door, the anti-Israel rally in your city. And it applies to the nations of the world who know about genocide in Iraq, Syria, the Congo, the upsurge of virulent anti-Semitism, the threat of radical Islam.

Each and every one of us is given the moral challenge to exercise our free will to build a good life and a just world. And if we refuse to acknowledge evil and fight it, we fail the test.

Edmund Burke once said, “One who confounds good and evil is an enemy to good.” Because my father was right, there really are bad people out there.

Mel Gibson and the Jews
It Takes A Lot Of Faith To Be An Atheist
How Instagram Brought Back This Nostalgic Soup
What Makes Eli Run?
Comments
MOST POPULAR IN Current Issues
Our privacy policy