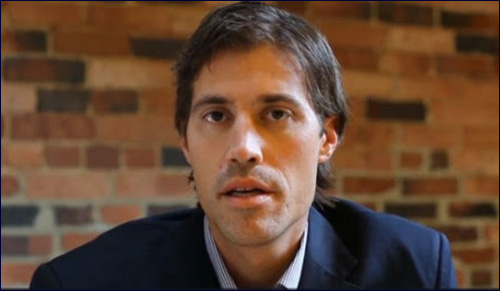 It's not enough to condemn evil; it must be confronted and conquered.

In the aftermath of the Holocaust, Romain Gary, in his powerful masterpiece The Dance of Genghis Khan, summed up civilization this way: “The ancient Simbas, a primitive tribe of cruel cannibals boiled their victims and then consumed them. The modern day Germans, heirs to thousands of years of culture and civilization, turn their murdered victims into soap. This, this passion for cleanliness – that is civilization.”

Last week James Foley, an American journalist, was brutally and sadistically beheaded with a 6 inch knife by a masked terrorist with an educated British accent, and a video of the gruesome murder was immediately available for viewing around the world on YouTube. This, this technological wonder that allows for the virus of violence to spread its message across the globe in an instant – this is what is fast becoming the sign of 21st century civilization.

Not to worry, says the President of the United States in his response to but the latest of horrors emanating from ISIS, the jihadist Islamic state in Iraq. He is well aware of the killing of innocents, the genocide of those with different beliefs, the abduction of women and children subjected to torture, rape and slavery. He knows, he tells us, that ISIS has no place in the 21st century. But he reassures us that based on his understanding of history “people like ISIS will ultimately fail.”

The reason? Pres. Obama explained, “They fail because the future is won by those who build and not destroy and the world is shaped by people like Jim Foley, and the overwhelming majority of humanity who are appalled by those who killed him.”

But that is not what both history as well as the Bible have taught us.

The good will not triumph over evil simply because an overwhelming majority of humanity are appalled by it.

Yes, in many ways history has moved forward. There are civilized societies that value human life and reject racism and prejudice. But the future of mankind has not been secured. There is still far too much evil for anyone to feel complacent. And the one thing we need desperately to recognize is that the good will not triumph over evil simply because an overwhelming majority of humanity are appalled by it.

Nazi Germany had a vision for world supremacy. It included the genocide of an entire people, the subjugation of all other nations and cultures, as well as the eventual extermination of non-Aryans. At first the scope of its horrific intentions went unrecognized by a world which couldn’t imagine the reality of evil of this magnitude – even when its author didn’t hesitate to make clear his goals and his “final solution.” Hitler published his manifesto, Mein Kampf, and the civilized world was appalled. But it did nothing. The Chamberlains preached passive acceptance of evil for the sake of peace. The world continued to be appalled as the Nazis built their concentration camps and crematoria. Yet moral outrage accomplished nothing.

Civilization and the values of civilized society survived to this day, at least to the extent that they did, is for one reason only. The United States and its allies thankfully realized that being appalled isn’t sufficient response to the kind of evil which threatens the very justification for the continued existence of human kind.

What saved the world was “the greatest generation” that took to heart a biblical truth: evil must not just be condemned – it must be confronted and conquered.

Shortly after the children of Israel acquired their identity as a nation and found deliverance from the bondage of Egypt at the Red Sea, they were attacked by a people known as the Amalekites. It was then, at that moment, they were shown the divinely approved response required of them. “And Moses said to Joshua choose for us men and go out and fight against the Amalekites.” Only then Moses, Aaron and Hur ascended a hill overlooking the battle and prayed to God for victory.

When Joshua and his soldiers prevailed, God then commanded Moses to write this down in an everlasting book for a memorial. The Amalekites became a paradigm for evildoers in every generation and the response in the recorded story in the Torah was meant as a message for all time. Pray, and do not become the victim of evil by refusing to challenge and fight it.

There are Amalekites in every generation. Jews in particular have been very familiar with them. And history has taught us, in the immortal words of Ecclesiastes, that “there is a time for peace and a time for war.”

Speaking at a recent Holocaust commemoration this past August, at Platform 17 at the Holocaust Memorial Site in Berlin, Yair Lapid, the Israeli Minister of finance, wondered “Why didn’t they fight? That is the question that haunts me. That is the question that the Jewish people have struggled with since the last train left for Auschwitz. And the answer – the only answer – is that they didn’t believe in the totality of evil.”

We can only pray that the question asked by Lapid won’t be asked years from now as historians struggle to understand the perilous decline of the West and its values in the face of Islamic barbarism. Why didn’t they fight? Why did America, once the most powerful country in the world and the torchbearer of democratic ideals stand back and feel content to merely mouth its appalled disapproval as modern day Amalekites destroyed the very fabric of civilization.

As Bernard Lewis was perceptive enough to point out years ago, what we are involved in today is a veritable “clash of civilizations and rearrangement of world orders.” In an astounding echo of the biblical choice offered to the Jewish people in the book of Deuteronomy, we are now facing the same choice verbalized by Moses: “I call heaven and earth to witness against you this day, that I have set before you life and death, the blessing and the curse: therefore choose life, so that you may live, you and your seed” (Deuteronomy 30:19).

The butchery of James Foley must spark more than moral outrage. It needs to become the clarifying moment for all those committed to the survival of the sanctity of life over the cult of death. It needs to alert us to the reality of an evil that we dared not imagine and that in our naïveté we still continue to refuse to acknowledge.

Most important of all it requires of us to recognize that we are far beyond a time for mere condemnation. We must be much more than appalled. We must come face-to-face with evil and destroy it if we do not wish to be guilty of suicide.

British Museum & Evidence of Israelite Slavery in Egypt
It Takes A Lot Of Faith To Be An Atheist
How Instagram Brought Back This Nostalgic Soup
What Makes Eli Run?
Comments
MOST POPULAR IN Current Issues
Our privacy policy