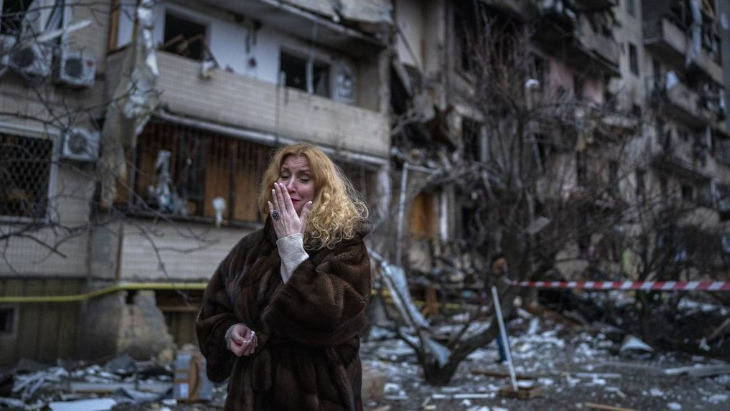 With everything going on in the world, we need to inculcate her message now more than ever.

Death is in the air.

Images of atrocities in the Ukraine, millions of refugees seeking safety and shelter, talk of weapons that vaporize human bodies and a new world order – they make us shudder.

And they all come on the heels of a year that has brought us vicious antisemitic attacks, a terrible pandemic, and world upheaval.

Some may wonder, where is God? We feel distant and alone.

Queen Esther, who risked her life for her people, left us with a letter of faith and love. She knew that we, her children, would battle hatred and unspeakable suffering throughout our long wanderings on this earth. The Scroll of Esther, Megillat Esther, would infuse us, her children, with hope.

“Esther requested that these words of Purim should be accepted and it was written in a scroll” (Megillat Esther 9:32).

It is as if Esther is whispering to us, “My dear children, you think that you are standing all alone? You think that you are going through dark times? Look at me! Every man, woman and child, in every land, I ask that you hear my words and read my scroll, until the end of time. Because my story is your story. We have been here before. You are never abandoned. You must never lose faith.”

The name of God is hidden, unmentioned in the entire Megillah, exactly for these darkest moments that we are facing right now.

Esther understood that our exile would bring us to the depths of hopelessness.

Esther understood that our exile would bring us to the depths of hopelessness. Shoved into cattle cars, left in ditches to die alone in the forest of Babi Yar, gassed, beaten, reviled, and told that we will be pushed into the sea. The earth’s soil is stained with the blood of our nation. Our very right to exist has been questioned. Millions of haters surround our land and the threat of Iranian nukes is looming. The world is on fire. What is there for us to hold onto?

Esther calls out to us on these days of Purim.

The Purim story describes Esther as an orphan. Her father died before she was born and her mother breathed her last breaths as Esther entered the world. Who can imagine her aloneness? Who can understand how vulnerable Esther felt? Yes, she had her beloved uncle, Mordechai who raised her from birth. But to be an orphan means that one is missing the two people who could possibly love you most in this world. Where do you go when your heart is broken and life seems too heavy to bear?

We, too, can feel as if we are an orphan nation. We feel helpless when the world seems to stand against us.

And there are times, in our private lives, that we feel the same as well. Alone. Hopeless. Shattered into a million pieces. Wondering what will be.

Esther’s scroll is testimony to the hidden hand of God in our lives. She beckons us to look deeper.

“See me? Who could imagine that an orphaned girl, bereft of her parents, all alone, would rise to become the queen who would save her people? There is a Master Plan guiding each and every one of us. Never lose hope.”

When Esther is confronted by Mordechai and asked to stand up for her nation as she speaks to King Achashverosh, she agrees on one condition.

“Go gather all the Jews and fast for me.” Esther is revealing to us a hidden truth.

If you want to successfully fight this battle, you must come together. These divisions and conflicts you have must stop. Jew against Jew. Neighbor against neighbor. Family against family. There is no strength when you are fragmented. Gather together as one and know that you are mishpacha, a family of Jews. You are more alike than you are different. You share roots. Be kind to one another.

Stop judging. Start loving. Extend yourself and bring light into a dark world.

Esther asked that we celebrate Purim by sending gifts of food baskets, mishloach manot, that we give charity, and share a festive meal. She directed us with the ability to reach out to one another in friendship and love. It’s not about the food and pretty packages. Esther is requesting that we provide food for the soul. Reach out and open your heart to someone who is not in your usual atmosphere…just because. Rejoice together in the miracle of our being. This is the key to our redemption. Stop judging. Start loving. Extend yourself and bring light into a dark world.

If we can rise to Esther’s challenge, we too can transform our days from “sorrow to gladness, and from sadness to a holiday.”

Hold onto the hope of Queen Esther. Feel her love. Live with her courage as your guide. Discover the power of Purim.

Why Harry S. Truman Recognized the State of Israel
For Every Individual, A Torah Scroll
Allegiance To The Monarch
Meet the Real You: Yom Kippur
Comments
MOST POPULAR IN Current Issues
Our privacy policy
Aish.com Is Looking for Great Writers