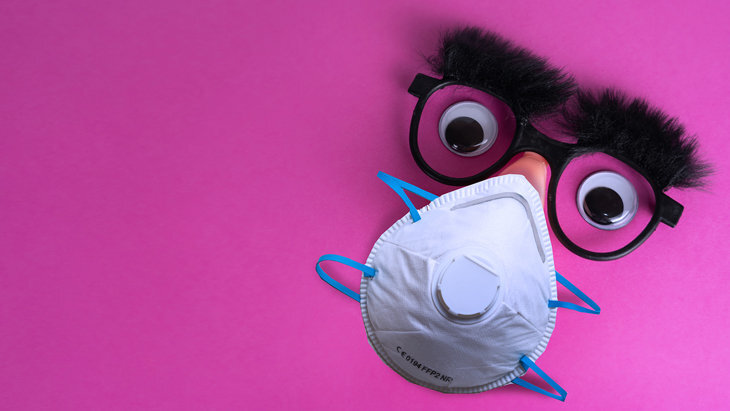 Purim masks and face masks: Looking forward to when masks stop concealing God's presence, nor be required by a soon-to-be conquered pandemic.

The Covid-19 pandemic which so horrifically changed our lives this past year remains inextricably linked with the holiday of Purim.

It's true that history books will record that the outbreak was initially reported to the World Health Organization on December 31, 2019. The first confirmed death took place in Wuhan on January 9, 2020 and it was on January 30 that the WHO declared Covid-19 a global health emergency. But for most of us, it wasn’t until Purim of last year that we first realized the severity of the pandemic.

It was the first time we were forced to think about whether we needed to change our plans for the Purim festive meal. Purim ended up becoming a super spreader and many people, unaware of the severity of the virus, contracted it at large neighborhood parties. It was the first time we seriously had to reconsider attending shul and figure out alternative venue for hearing the reading of the Megillah. And then we had to think the unthinkable – we might have to cancel our Passover plans and who knows what else was meant to be in our future.

It is a year later and I can't get over the fact that Jews around the world traditionally observed Purim by putting on a mask. But this time masks would not come off at the conclusion of the holiday. Masks became necessities. Masks became the law. Not a Purim custom but a pandemic requirement.

Although Purim masks and protective facemasks are different, there may be a profound connection. To grasp its deeper meaning, let's reflect on the reason masks made their way into celebrating Purim in the first place.

Masks hide what's behind them. And that's why masks became identified with the story of Purim. The Scroll of Esther has a unique characteristic. It tells us all about Esther and Mordecai, yet it omits the name of God. God is hidden in a book commemorating a miracle for which He is clearly to be credited. How strange!

Stranger still is the name of the person who is accorded the honor of the book’s title. It is known to this day as Megillat Esther. The Talmud asks a peculiar question: where is Esther to be found in the Five Books of Moses? The query makes no sense. The Torah predates Esther by many many centuries. There is no way Esther could possibly be found in the Torah. Yet the Talmud answers that there is a biblical verse which alludes to her – and to her significant role as savior of the Jewish people from the genocidal plans of Haman in later day Persia. In Deuteronomy 32:20 God prophetically tells the Jewish people there will come a time when “I will hide my face from them.” In Hebrew the phrase for hiding is haster aster – the very root letters of the name Esther. That was the genius of the Talmudic rabbis. They recognized Esther as a “hidden” way of identifying God’s presence.

In the Megillah, ostensibly the story of a miracle performed by God, His name is absent, hidden by the countless “coincidences” that are really the results of concealed divine intervention. The very word "Megillah" means not only scroll but also “to reveal.” The mitzvah of reading Megillat Esther is in a more profound sense mean to inspire us to uncover God when he chooses to test us by remaining hidden.

When God wears a mask, our task is to acknowledge His guiding presence even when we can’t clearly make out His face.

There are times when God wears a mask, and our task is to acknowledge His guiding presence even when we can’t clearly make out His face.

Purim is not like Passover. The Passover miracles were clear and indisputable. Purim requires a greater level of wisdom and understanding. All other holidays, says the Talmud, will eventually be eliminated – except for Purim. Purim is the paradigm of our challenge to maintain our faith even when His face is hidden behind a mask of seeming indifference to our plight.

We need to remember that the Jews of the Purim story spent agonizing years as spectators to frightening events. The party in Shushan recorded at the beginning of the Megillah was held by the king to celebrate his conquest of the holy items of the temple. The rise of Haman and his genocidal plot against the Jewish people played out over a lengthy period of time which surely tested faith in God and his continued presence.

We've spent a year in distress, incomprehension and agony. Some of our greatest spiritual giants were taken from us in this year of horror. Families witnessed the untimely – and sometimes exceedingly painful – death of loved ones. The world has changed in so many ways that we can hardly begin to count them or even to be fully aware of their extent and future influence.

On this first anniversary that coincides with Purim, let's reaffirm that although we do not understand, we continue to have faith. Like Purim, at times God puts on a mask and conceals His presence and His purpose. But as Purim also teaches us, miracles of salvation are part of the story as well, and we have every certainty that the day will come when masks will no longer conceal the Almighty’s presence – nor be required by a soon-to-be conquered pandemic.

Spotify’s Shuffle Button and the Meaning of Purim
Scientific Curiosity and the Divine Encounter
Mind Over Milkshakes
Love the Convert
Comments
MOST POPULAR IN Current Issues
Our privacy policy
Aish.com Is Looking for Great Writers