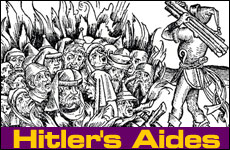 How Christian teachings about Jews helped pave the road to the Holocaust.

After celebrating their liberation from the ancient Egyptian yoke, Jews mark Yom HaShoah, Holocaust Remembrance Day. The date was chosen to commemorate the revolt at the Warsaw Ghetto, an event in which a handful of Jews dared confront the all-powerful pharaoh. But the story of our brothers in the ghetto did not have a happy ending; the Red Sea did not open so that the pursued could escape, nor were their enemies smitten by divine hand. Instead, the few survivors from the hell that was the ghetto ended their lives in the vortex of death that was Treblinka.

The Warsaw Ghetto was one of the many ghettos the Germans established in various European cities. The ghettos were created with the sole purpose of keeping the Jewish population locked in to prevent them from having contact with their Christian neighbors. The Germans forced hundreds of hundreds of thousands of Jews to live packed in these places that would have normally held a tenth of the population.

The Jews from the ghetto, as well as those that still lived “free” in other cities, were forced to sew a yellow Star of David on their clothes so that the Christians could clearly identify them. The draconian anti-Jewish laws the Germans promulgated in 1935, followed by similar ones in Italy in 1938 and then in France, Slovakia, Hungary and other countries, prevented the Jews from socializing with Christians, holding public office or academic positions, working in professions such as law or medicine, as well as many other restrictions, including loss of citizenship. These laws constituted grave human rights violations and were the first steps in a gradual process of dehumanization of the Jews that made the subsequent genocide possible.

Where did the Germans get all these ideas? Which Machiavellian functionary thought of this? When the Nazis came to power in 1933 they discovered they did not need to invent almost anything in their persecution of the Jews, because the Catholic Church had invented practically everything hundreds of years before.

When Hitler came to power, he found that the population already deeply hated Jews.

The yellow badge in the garments, the prohibition to hold public office, the prohibition to have Christian employees, the burning of the Talmud, the prohibition of living next to Christians, the prohibition from belonging to guilds or work in industry, the ghettos, all these violations to basic human rights of Jews that we associate with the legislation of the Nazi tyranny was promulgated by the Catholic Church between 400 and 700 years before the Nazis. During almost two millennia Christians were taught that Christianity had replaced Judaism, and that Jews were evil, bent on the destruction of Christianity and that they were killers of Jesus.

So we should not be very surprised that when Hitler came to power, he found that the population already deeply hated Jews. That hatred had been planted and cultivated by Christianity since practically the beginning of the Christian movement in the first century of the Common Era. A verbal hatred that began as an intra-Jewish fraternal fight, with time and the distancing of the Early Christians from mainstream Judaism (as Christianity gained traction among the pagan peoples of the Roman Empire) it transformed itself in violent, visceral and irrational hatred.

The Christian movement accused Jews of killing Jesus and of rejecting his messianic mission. As a consequence, the Early Christians developed the concept of supersessionism in which Judaism was relegated to second plane as Christianity was replacing it. Christians believed at this time that God considered Christians the “New Israel” and the new “Chosen People.” They began calling the Christian Bible the “New” Testament and the Hebrew Bible the “Old” Testament, once again suggesting that the Jewish religion had become superfluous.

Despite oppression and hardship, the Jews did not disappear. This tenaciousness to survive and their continued refusal to accept Jesus as the Messiah led to an increase of Christian hatred toward Jews. The Church Fathers, whose writings make up the foundation of Christianity as we know it today, wrote about Jews in manner comparable to the Nazis. As St. Ambrose, known as the “Bishop with the Golden Tongue” said in 374 CE,

“The Jews are the most worthless of all men. They are lecherous, greedy, rapacious. They are perfidious murderers of Christ. They worship the Devil. Their religion is a sickness. The Jews are the odious assassins of Christ and for killing God there is no expiation possible, no indulgence or pardon. Christians may never cease vengeance, and the Jew must live in servitude forever. God always hated the Jews. It is essential that all Christians hate them.”1

Saint John Chrysostom, bishop of Antioch, was not that much better just a few years later:

“Where Christ-killers gather, the cross is ridiculed, God blasphemed, the father unacknowledged, the son insulted, the grace of the Spirit rejected. . . .If the Jewish rites are holy and venerable, our way of life must be false. But if our way is true, as indeed it is, theirs is fraudulent. I am not speaking of the Scriptures. Far from it!.. I am speaking of their present impiety and madness.”2

During the Middle Ages Christians began associating Jews with the Devil. This association was a natural one to make for a population already used to reading in the Gospels sentences like, “You belong to your father, the devil, and you want to carry out your father’s desire.” Christian thinkers asked themselves what kind of creature would reject the truth and kill God, and concluded that only an inhuman agent of Satan could act that way. The descending spiral led many European Christians, most of whom had never even seen a Jew, to form a fantastic conception of them that had no basis in reality.

The Enlightenment transformed the Christian theological anti-Judaism into something modern, secular and pseudo-scientific.

The French Revolution brought about the Emancipation of the Jews, who quickly left the ghettos and in large part assimilated to the Christian population of the cities to which they moved. The Enlightenment transformed the Christian theological anti-Judaism into something modern, secular and pseudo-scientific, sine qua non prerequisites for a population that was rapidly adopting a modern worldview detached from the yoke of their religion. It’s in these cultural surroundings that anti-Semitism was transformed into something racial, and it’s in the 19th and 20th centuries that the old accusations of deicide, of poisoning wells, of bringing about the Black Death, of killing Christian boys to extract their blood to make matzah and many other baseless accusations were transformed into modern accusations in which Jews were blamed for Germany losing WWI, of creating and fomenting revolutions, of modernism, of Capitalism, of Communism, of inflation, of unemployment, and many more.

The Nazis inherited this conception of the Jew. Hitler was raised as a Catholic and imbibed the traditional anti-Jewish teachings in Christianity, and he took maximum advantage of them to promote his agenda. As he told two German Catholic bishops in 1933:

“The Catholic Church considered the Jews pestilent for fifteen hundred years, put them into ghettos, etc., because it recognized the Jews for what they were. . . . I am moving back toward the time in which a fifteen-hundred-year-long tradition was implemented. . . . I recognize the representatives of this race as pestilent for the state and for the church and perhaps I am thereby doing Christianity a great service for pushing them out of schools and public functions.”3

A Note from the Author: Antisemitism in Christianity and its role in the Holocaust

Thank you all for your comments. One important point to keep in mind is that this article does not describe modern Christians or Christianity. The focus of the article (and the book) is on the history of Christianity leading up to the Holocaust, particularly as it was in Europe. The Catholic Church convened the Second Vatican Council in the 1960s and among other things officially lifted the Christian accusation of deicide. But for those Christian readers who were raised after 1965, you should know that prior to that Christianity taught that Jews were Christ-killers, and that all the Jews of Jesus’ time, and for all time, were guilty of his death: ‘Let his blood be on us and on our children!’ (Matthew 27: 24-25). This brought untold misery on Jews during centuries of persecution. Christians were incensed by passion plays and Good Friday liturgy and went out on murderous rampages. The negative teachings about Jews were pervasive, starting with the New Testament (just the four Gospels and the Acts of the Apostles contain 450 antisemitic verses, an average of two per page!) and including the writings of the Church Fathers, Martin Luther and other Christian thinkers and theologians. Priests everywhere in Europe routinely disparaged the Jews through the centuries in their sermons, even during the Nazi era.

In other words, there’s a sad history wich runs deep and for a long time. Many of the perpetrators of the Holocaust saw first hand, or heard from their parents or grandparents about the ghettos the Church had instituted not in the name of Hitler but in the name of Jesus. Think about it: the walls of the Roman ghetto, literally across the Tiber from the Vatican, were destroyed for the last time in 1870!

Most Christians today do not harbor this hatred toward Jews. Many Christians helped Jews during WWII, but as good as that was, unfortunately it was a tiny drop in a giant ocean of violence toward Jews from other Christians. Many Christians today, particularly in the US, are friends of the Jews and of Israel. This is a good thing. It is my hope that through healthy discussion like this one, and through education about history as I tried to convey in my book Six Million Crucifixions, further links will be forged, and pre-existing ones will be strenghtened. Even with the great progress of Vatican II and its subsequent teachings, there’s still work to do to completely eliminate antisemitism from Christianity.

Based on the author's book, “Six Million Crucifixions: How Christian Teachings About Jews Paved the Road to the Holocaust”.

Gabriel Wilensky is the author of “Six Million Crucifixions: How Christian Teachings About Jews Paved the Road to the Holocaust”. Click here to order.

Survivors
Korach 5782: Visit to Lift the Spirit
That Time The Ivy League Found A Way To Limit Jewish Enrollment
Would You Rather Be Right or Happy?
Comments
MOST POPULAR IN Holocaust Studies
Our privacy policy