A Letter to Hitler 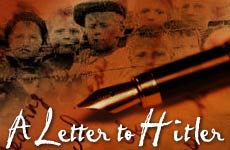 What makes my brother's newborn daughter so special is that nearly 60 years ago, you tried to prevent her from ever being.

Last week my brother's wife gave birth to a healthy baby girl. It is a miracle when a child is born healthy, and it is with untold joy that each child is welcomed into a family.

But it is not these reasons alone that make this child so special. What makes her so special is that nearly 60 years ago, you tried to prevent her from ever being.

In 1944, my grandparents, father, uncle and aunt were taken like animals and herded into cattle cars to be transported to Auschwitz. My father and uncle were soon separated from their father. The last words my grandfather said to them were: “Always remember you are Jews." With those words my grandparents were gassed to death in your gas chambers.

My uncle survived a year of torture, starvation, beatings and other cruelties, only to be beaten to death a week before liberation. Until this day, no one knows what happened to my father's only sister.

My father is the only one to have come out of that hell. At the age of 20, having lost his entire family, after time in DP camps, he left the country of his birth and came to America.

My father did not use the horrors that he had barely lived through to prevent him from making a new life. He learned the language, put himself through high school and college, and found employment. Later he met my mom, married and raised a family.

My father spoke about the Holocaust and what had happened to him, and it is then that I grew to hate you with an intensity that I never thought I would overcome until now. My niece is not just another beautiful little baby born to a young couple. She is a vision of hope.

Many have asked my father how he survived. I’ve never heard him give the same answer twice. It's always in different words, but the idea is the same. God saved him. His faith and trust in God never wavered. This gave him the strength to survive hell on earth. Were there days when he wanted to give up? Yes. But did he? No. Time and time again I’ve heard him say that he never had a doubt that he would survive.

You did not only murder 6 million innocent human beings. You did not only torture thousands more. You did not only ruin the lives of thousands who survived your death camps. You continue to wreak havoc even now. All of my life I have been told, read and saw movies about the Holocaust. It has had a seminal affect on my life. You are not just a name in history to me. You are the definition of evil and I have hated you since I knew of your existence.

Had anyone told my father so many years ago that he would walk his son to the chuppah in Jerusalem and hold his granddaughter a year later, I’m sure he would have looked at them as if they were insane. Yet so many years later, we are here, and you are long gone.

And so I say to you, as you look out from hell and see the miracle of my niece being born, you did not succeed, and animals like you never will. What you and all the others like you didn't and don't see is that we are God’s children, and nothing any of you ever do will destroy us. You are long gone and we are still here, stronger then ever, with a land we can call our own, and a faith more powerful than any hatred can spoil.

Beneath a Scarlet Sky: Italian Heroism in the Holocaust

The Day of My Victory
Va’etchanan 5782: A for Effort
Can You Show Me This "God?"
How to Become Immortal
Comments
MOST POPULAR IN Holocaust Studies
Our privacy policy
Aish.com Is Looking for Great Writers