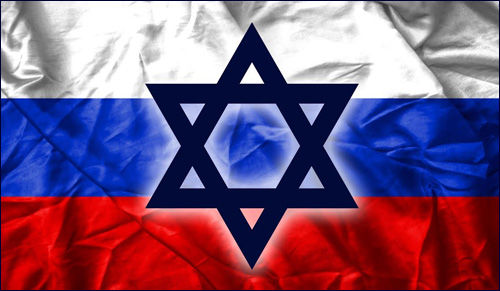 Brandeis University Professor Jonathan Sarna recalls visiting Russia in 1986 when Jewish education and practice was brutally suppressed. “Whatever Jewish life existed in Moscow transpired underground. The teaching of Hebrew was illegal, most Jewish gatherings were banned, the Choral Synagogue (the only synagogue allowed to operate in Moscow) was filled with spies and the most conscious of the city’s Jews were the refuseniks who sought to leave Mother Russia forever.” 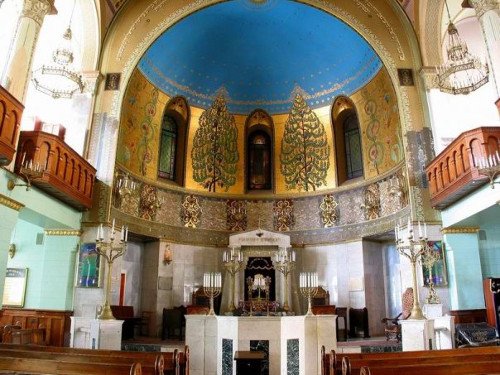 In contrast, Prof. Sarna, notes, “Nowadays, Jewish activities take place in public all around Moscow.” Today at least four Jewish schools in Moscow teach a range of religious and secular subjects, including Hebrew. Even Moscow State University has a department of Jewish studies. Instead of one synagogue, Moscow today is home to about 20 synagogues. The iconic Choral Synagogue has been refurbished and attracts scores of worshippers each Shabbat.

In St. Petersburg, Jewish life has been revived as well: synagogues, a Jewish Community Center, schools, a Hillel and senior center all educate St. Petersburg’s Jews. In a city that before 1917 banned Jewish residency, public Shabbat dinners now draw crowds of Jews. 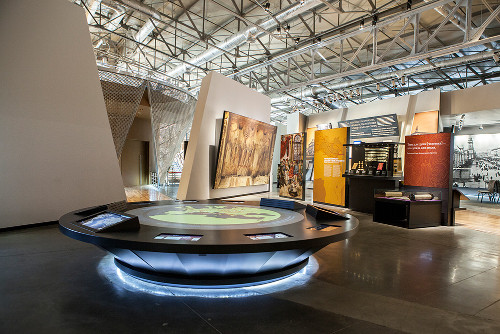 Gallery at the Jewish Museum and Tolerance Center

In 2012, the Jewish Museum and Tolerance Center opened in Moscow. The museum contains a world-class multimedia presentation of Russian Jewish history and has become one of Europe’s most prestigious museums. At its opening, Israel’s then-President, Shimon Peres, who was born in Belarus spoke, recalling how “my mother sang to me in Russian, and at the entrance to this museum, memories of my childhood flooded through my mind, and my mother’s voice played in my heart”. Many Russian Jews couldn’t believe that such a major museum devoted to Russian Jewish history now exists in the heart of Russia’s capital. The museum complex houses a synagogue, a community center, schools, a publishing house, bookstore, and doctors’ offices.

Jews make up about 0.16% of the total population of Russia, according to the 2002 census, and Russia’s Jewish community is shrinking. Numbering 2,279,800

Jews in 1959, many members of Russia’s Jewish community have emigrated in recent decades. Between 1989 and 2002, fully 40% of Russian Jews left, many to settle in Israel. By 2002, the date of the most recent census, about 435,000 Jews called Russia home. Today approximately 180,000 live in the Russian Federation.

Small family sizes and high rates of assimilation and intermarriage mean that fewer Russians identify as Jews. As many as 80% of non-Orthodox Jews in Russia marry non-Jewish spouses.

Today’s Russian Jewish community is overwhelmingly urban: a little over half of Russian Jews live in and around Moscow, and about 20% call the St. Petersburg area home; the remaining Jewish population lives in other big cities. Despite the many Jewish organizations and programs that have sprung up in the past decades to educate and inspire Russian Jews, many Jewish events attract more elderly people than young children. As in many Diaspora communities, intermarriage and assimilation have emerged as major challenges to Russia’s Jews.

One challenge facing Jewish schools in Russia is the dire financial situation many parents find themselves in. Many Russian Jewish schools are supported by Russian and foreign philanthropists who try to nurture children both inside and out of the classroom. With many parents working long hours to make ends meet, it’s not uncommon for students at these Jewish schools to attend school from early in the morning until after dinner, providing both a much-needed break for parents, and offering kids a nurturing Jewish community.

A major factor in the resurgence of Jewish life in Russia is the seeming pro-Jewish disposition of Russian President Vladimir Putin. 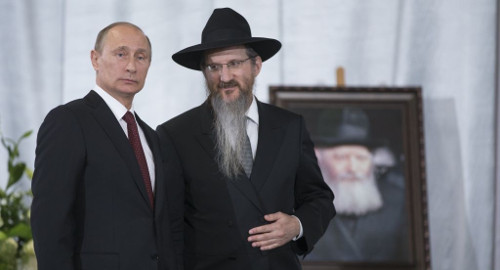 The father of this family was Anatoly Rakhlin, Putin’s high school wrestling coach. In his autobiography, First Person, Putin describes Rakhlin and his family as “observant Jews who did not work on Saturdays, and the man would study the Bible and Talmud all day long… Once I even asked him what he was (studying). He explained to me what this book was and I was immediately interested.”

Later, Putin recalls crying at Anatoly Rakhlin’s funeral. Another Jewish teacher who made a lasting impression on Putin was Mina Yuditskaya Berliner, his high school teacher. Years later, when he learned that Ms. Berliner was living in Tel Aviv and had very little money, Putin bought her an apartment.

As Putin grew up and rose in politics, his warm personal feelings towards the Jewish community motivated him to help. When Putin served as Deputy Mayor of Leningrad (now St. Petersburg), he gave permission for the first Jewish school to open in that city. Later, when the Jewish Museum in Moscow was being built, he donated a month of his salary to the venture; his name is listed on the museum wall today as a donor.

Political uncertainty is a major challenge in Russia today. Freedom House, a non-governmental organization, characterizes Russia as “not free”, citing crackdowns on civil society, suppressing opposition movements and parties, saturating the media with nationalist propaganda, and restricting the media. Reporters Without Borders, an organization that compiles an annual Press Freedom Index, ranks Russia 148th out of 180 countries worldwide. Many opposition politicians have been imprisoned for corruption (some say on trumped-up charges) or died under mysterious circumstances in recent years.

Crackdowns on politicians who are calling for reform hit Russia’s Jewish community hard. “Nearly all the leaders of the liberal opposition are either fully Jewish or have Jewish background,” explains Michael Edelstein, a lecturer at Moscow State University. In Soviet times, Jews were barred from the most prestigious Russian universities and many Jews attended less prestigious schools such as Moscow’s Institute of Oil and Gas. This made them ideally suited to develop Russia’s oil industry after the fall of Communism. By the early 1990s, six out of seven of Russia’s richest oligarchs had Jewish family links. Many oligarchs later struck out in politics and filled the ranks of Russia’s opposition politicians today. 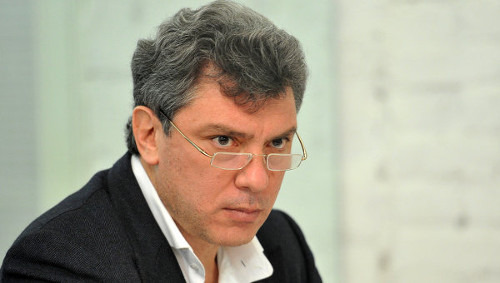 One opposition leader to die in mysterious circumstances was former Deputy Prime Minister Boris Nemtsov, who was gunned down in 2015 after he urged Russians to attend a rally protesting Russia’s military actions in Ukraine. (The Kremlin denied any involvement in his death.) Like many opposition politicians in Russia, Nemtsov had Jewish links: Nemtsov himself was Jewish, though he considered himself Christian.

Other opposition figures have found themselves in prison. Mikhail Kodorkovsky, an oligarch with Jewish roots (his father is Jewish) founded the Open Russia Foundation in 2001 to encourage liberal values. Praised abroad, Kodorkovsky increasingly found himself imperiled at home. In 2003 he was arrested for corruption and sent to prison. After lobbying by foreign leaders he was released in 2013 and currently lives in Switzerland. While many Russian businessmen might fear anti-corruption probes, Russian Jews often find themselves in the crosshairs of Government crackdowns. Micah Naftalin, who served as National Director of the Union of Councils for Soviet Jews, noted that in post-Soviet Russia “in every case, the prosecution has been focused on the Jewish oligarchs”.

One safe haven that many Russian Jewish oligarchs and opposition figures turn to is Israel. The Economist magazine has noted that with many prominent Russians (many of whom are Jewish) “forced to choose between being for or against Vladimir Putin...Israel has become a neutral zone where they can all meet, safe from extradition for often politically motivated indictments.”

Despite Russia’s thriving Jewish life and pro-Jewish overtures from President Putin, Russia today is home to worrying levels of anti-Semitism. A 2015 ADL poll found that fully 23% of Russians harbor anti-Semitic views. In recent months, a series of high-profile anti-Semitic incidents has made some Russian Jews reconsider their place in Russian society.

In January 2017, the Deputy Speaker of the Russian Parliament Peter Tolstoy accused Jews of continuing the work of their “ancestors” who “pulled down our churches” and persecuted Christians in Soviet times. Rabbi Alexander Boroda, President of the Federation of Jewish Communities of Russia, warned that this represents a dangerous escalation. “Such statements usually come from irresponsible instigators of anti-Semitic campaigns,” Rabbi Boroda explained. “When we hear this from the mouth of the State Duma (Parliament) Vice Speaker at an official press conference, this is a direct undermining of interethnic coexistence in the country, and it stirs up tension.”

Tolstoy’s statements came a week after a district court in the city of Yekaterinburg sentenced a defendant to community service for inciting hatred of Jews online, accusing Jews of “domination” of Russia and the world in a Russian-language social media site.

In February 2017, two prominent Jewish leaders, Rabbi Ari Edelkopf, an American Chabad rabbi, and his wife Chana, were ordered to leave Russia, along with their seven children, after officials called Rabbi Edelkopf a threat to national security. No concrete accusation or explanation was given for the order. Rabbi and Mrs. Edelkopf came to prominence during the 2014 Winter Olympics in the Russian resort of Sochi, where they led the 3,000 strong Jewish community. During the Olympics, Jewish visitors could worship in three synagogues, five information centers, and round-the-clock kosher catering. A spokesman for the Federation of Jewish Communities of Russia said the ruling “raises serious concerns for the future of the Jewish communities in the country”. 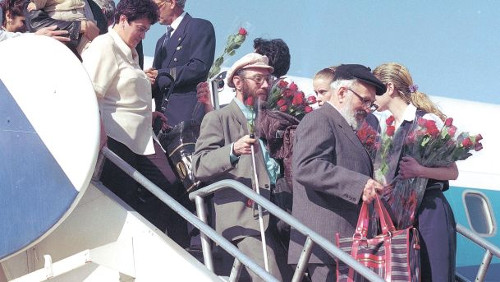 Many identified Jews in Russia have visited Israel, and often have relatives living there. Buying property in Israel is popular among Russian Jews who can afford it, serving as a guarantee of a place to move if ever they should feel the need to leave Russia.

In 2014, a Jewish resident of Moscow, David Nazarov, explained to the Times of Israel why he, like many Russian Jews, was thinking of moving his young family to the Jewish state. “I would love to see my children and grandchildren grow up in Israel. The country is tiny and surrounded by enemies, yet I feel much safer in Israel than in Russia. It is because of the people, because I know I am in a Jewish state.” In the three years since he expressed this desire, many thousands of Russian Jews have turned this dream into a reality, saying goodbye to Mother Russia and building new lives in Israel.

Miracle or Luck? Israel's Inexplicable Mortality Rate in the Persian Gulf War
Extras In Our Own Epic
Evolution 2.0: The Coming Darwinian Revolution
Chukat 5782: Let’s Play the Blame Game!
Comments
MOST POPULAR IN Israel
Our privacy policy