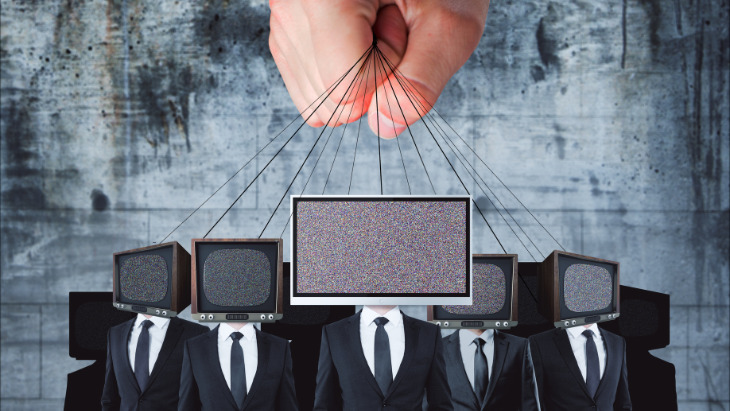 With ironclad control of media, Putin wants Russians to forget their history so he can repeat it.

The world has never seen sanctions like those applied to Russia. They aim straight at the jugular of the Russian financial system, liable to plunge the Russian economy into inflation the magnitude of which it has not seen since the early 1990s. In addition, the sanctions should in theory deprive Russia of the economic oxygen it needs for President Vladimir Putin to strengthen the Russian military and put a painfully high price tag on future wars.

Will sanctions bring an end to Putin? The West is betting that the Russian people will revolt against their dictatorial ruler, and this will bring an end to the war. But sanctions have a checkered history. They didn’t get rid of Castro in Cuba or the Kims in North Korea. It took more than a decade for sanctions against South Africa in the 1980s to bear fruit.

In fact, these sanctions may give Putin even more power. How? He may not be able to control sanctions or their impact, but he can control what Russian citizens believe about them.

In 2014, I was perplexed by how the Russian people could possibly support and not be outraged by Russia’s invasion of Eastern Ukraine. But I live in Denver, and I read mostly American and European newspapers. I wanted to see what was going on in Ukraine from the Russian perspective, so I went on a seven-day news diet: I watched only Russian TV – Channel One Russia, the state-owned broadcaster, which I hadn’t seen in more than 20 years – and read Pravda, the Russian newspaper whose name means “truth.”

In Russia, there is only one media voice and that is the voice of the government; all other voices were silenced.

I have to confess, it is hard not to develop a lot of self-doubt about your previously held views when you watch Russian TV for a week. But then you have to remind yourself that Putin’s Russia doesn’t have a free press. The free press that briefly existed after the Soviet Union collapsed is gone – Putin killed it. The government controls most TV channels, radio and newspapers. What Russians see on TV, read in print, and listen to on the radio is direct propaganda from the Kremlin.

I know exactly what I am going to hear back from some of my fellow Americans. They are going to say: Don’t you think Americans are brainwashed by Fox News, MSNBC, CNN and other news outlets? And sure, there is no question that American news is more biased today than ever before.

But there is a difference between bias and what is happening in Russia. At least by watching different news outlets and reading different newspapers, Americans can triangulate to get to the truth. Most importantly, the US government doesn’t tell networks what to say. The editor of The Washington Post doesn’t have to worry about being arrested on a trumped-up charge if he writes a scathing article about President Biden.

In Russia, there is only one media voice and that is the voice of the government; all other voices were silenced. The government has zero accountability. Think of Watergate, Irangate, and other “gate” scandals that were exposed by the press – they could never happen in today’s Russia.

Over the last few days things have gotten tremendously worse on this front. Russia passed a new law: If you call this war with Ukraine a war, not a “special operation” or publish any views that contradict stories put out by the Ministry of Defense (i.e., create “fake news”) you can get up to 15 years in prison. Providing assistance to foreign organizations that oppose the war (sorry, “special operation”) with Ukraine will be considered treason, which may result in up to 20 years in prison. Needless to say, most independent local and foreign news organization immediately closed their doors. Since the invasion, Facebook, Twitter, and other social media have also been blocked in Russia. In other words, Russia turned into China overnight.

I belong to a WhatsApp group chat with my classmates from middle school in Russia in the 80s. This is what they told me: Russia was forced into this war. It is getting rid of Neo-Nazis in Ukraine. The Russian Army is liberating Donbas and Lugansk from Ukrainian genocide. Their admiration for Putin was at a new high. (The stories I read that Putin’s popularity is hitting new heights seem to be true.) At the end of the conversation, I was convinced they were brainwashed and they were convinced that I’m brainwashed.

We had no shared reality to stand on.

These are folks I went to school with, played in the snow with. I even had crushes on a couple of them. They are kind, good people, but Putin’s TV has completely zombified them. As one of my friends said, they have Russian TV playing in their brains.

Control of the media allows Putin to completely distort and carefully craft his version of the truth.

Control of the media allows Putin to completely distort and carefully craft his version of the truth. And this is why I am worried that sanctions may not be as effective as we hope and that Russia’s next chapter looks very dark.

Not everyone is zombified in Russia. A few of my school friends reached out to me privately and expressed their disgust with the war. They did not want to voice their opinions in public, even when we talked on WhatsApp. Despite WhatsApp’s claim of end-to-end encryption, they were still concerned that they might be monitored. These are not paranoid people, but individuals who know the ugly Russian history and who are acutely aware that the punishment that newly passed laws carry for being labeled an “enemy of the state” or a “collaborator with the enemy” (yours truly) is 15 years in prison.

Return of the Gulag

This isn’t the first time Russia has trusted a bad, even evil, leader. Until the late 1980s, Joseph Stalin was a Soviet hero who led the Soviet Union to victory against the Nazis. After perestroika and glasnost in the late 1980s, we were shocked to learn that the evil of Stalin, the father figure we admired so much, was fully on par with Hitler’s. Stalin killed 20 million people, while 27 million people died in WWII.

If you were called an “enemy of the people” in Stalin’s Russia, there was no due process; you were guilty and you were either shot or sent to a gulag, where you’d die from inhuman working conditions and hunger. In fact, a lot of magnificent Soviet infrastructure was built by slave labor (“enemies of the people”).

To my shock, this war is more popular in Russia than I ever thought it would be.

Today, Putin’s government is rewriting history. Stalin is back in vogue again. He is glorified as a leader who united the country, and new statues of him are popping up across Russia. In 2014 Russia passed a law that prohibits criticism of Soviet activities during WWII, and thus of Stalin.

In less than two weeks since the beginning of the Ukraine war, with the passing of new laws, Russia has made an enormous leap back towards 1937 and an oppressive Stalin-like regime. Meanwhile, Ukraine, thanks to Russia, has been sent back to 1941, with women and children started dying from artillery and rocket bombings.

The situation in Russia will get worse. Mothers will realize they have lost their children in Ukraine, and sanctions will cause enormous unemployment, breadlines, and maybe even hunger. People will start speaking up more – and the Stalin-era oppression will likely come back in full swing. The country will suddenly be swarming with “enemies of the state” and gulags will be back in vogue again.

Putin wants Russians to forget their history so he can repeat it.

Unfortunately, to my shock, this war is more popular in Russia than I ever thought it would be. Putin is under little pressure to conclude it, and, as my Russian middle school friend said, “The war has already started; we have to finish it.”

This op-ed originally appeared on the Times of Israel.

A Refugee’s Secret Act of Kindness

We Need to Change How We View Disabled People

The Two Jewish Brothers who Defied Segregation in Atlanta
For Every Individual, A Torah Scroll
Allegiance To The Monarch
Meet the Real You: Yom Kippur
Comments
MOST POPULAR IN Current Issues
Our privacy policy
Aish.com Is Looking for Great Writers