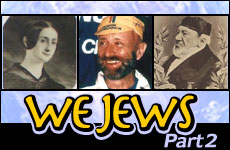 Tales of Jews who are both unsung and fascinating

While researching thousands of We Jews, every once in a while I’d come across an MOT whose fame may now be modest, but whose “story” is heroic or fascinating and keeps wafting around the corners of my mulching mind. Each one added a unique stitch to our design and became yet another fact I stored. At the very time I’m losing brain cells, I’m gaining enough material to risk brain burst. My only hope is to “share” – and what a mechaye [pleasure] it is!

The first "stand-up" may have been a Jew, Menophilus (“Take my idol, please!”).

Aliturus, Menophilus, Resh Lakish
Alright, ok. They may have had to do a little name “adjusting” in the 1950s Borscht belt and TV. But ... the three above had “stage presence,” which was unusual among early pious Jews. In the first century, the audience, however, wasn’t filled with Cohens and Goldsteins. They performed for Mr. and Mrs. “Pagan.” In Rome, among Nero's favorite was the Jewish actor Aliturus , and the first "stand-up" may have been a Jew, Menophilus (“Take my idol, please!”). In century three, Resh Lakish (prior to becoming a rabbi) had worked as a circus strongman.

Abraham Farissol
Farissol was fascinated by exploration. But using his Yiddishe kop, realized that before shlepping, it was a good idea to know where. So in 1524, he created the first description of the New World in Hebrew literature (also translated into Latin), called Iggeret Orhot Olam (A Tract on the Paths of the World), which was a crude shield-like "map" of the New World, which he called, "New Land" in Hebrew. Farissol also wrote of unknown places where Jews reside -- the borders of the Land of Israel.

Eliezer Ben-Yehuda
Hebrew ceased be a spoken language around 250 B.C.E. A forward thinker and early Zionist, Lithuanian-born Ben-Yehuda (1858-1922) realized that Jews returning to their homeland would need to farshtaist one another. In Hebrew. How do you revive a language? Write an updated dictionary! So he became the Hebraic Webster! Not a small task, he got the family involved. After moving to Jaffa in 1881, not only did the Ben-Yehudas run a Hebrew-speaking household, they worked tirelessly on the first modern Hebrew dictionary. All 16 volumes were completed by his wife and son after his death, and published in 1959, with over 4,000 new words from biblical Hebrew roots.

Penina Moise
One of our marvelous ethno-traits is persistence, especially in the face of adversity. Penina Moise was nothing if not persistent, but such is the nature of talent! The fledgling poet, the sixth of nine children, was the daughter of French Jews who fled to South Carolina. Forced to quit school after her father’s death, at age 12, she became head of the household, caring for her family and her ailing mother. Yet she persisted, writing verses by moonlight. Her work was first published in 1830, making her the first Jew to publish poetry in the U.S. Her prolific poetry around Jewish themes can still be found in current hymnals. She died in 1880, leaving a rich legacy for Jewish women to emulate: smashing glass ceilings against all odds.

Sir Moses Montefiore
His name? Sir Moses Montefiore (1784-1885). His game? Sheriff of London in 1873. Wyatt Earp he wasn’t, but a Jewish humanitarian he was. Sheriff Moses supported Jews in England, projects in Israel and Jewish interests worldwide. As President of the Board of Deputies of British Jews (1835-1874), he wore his badge with Jewish pride. He went from Sheriff to “Sir” when honored with both a knighthood and a baronetcy. Now there’s one Sheriff even Robin Hood (who definitely had Yiddishe kop potential) might have split fish and chips with!

Louis Rubin
Although matches made by passion instead of pros, was the major M.O. in America, as late as 1916, thousands of Jews still used shadchans (and some still do), to find the perfect mate. Originally, these matchmakers were learned elders, but the “business” of love “yenta-sized” the profession (think, Hello Dolly). The “deal?” Five per cent of the dowry plus a fee. In “modern times,” Louis Rubin held the distinction of being a legendary matchmaker. In a 1938 interview with the New Yorker, he claimed he’d arranged 7,000 marriages, and never took less than $100 a case. According to Rubin, “In most cases it’s just as well not to have [pictures]– unless the subject is unusually attractive.” Even if the “Net” existed back then, he’d no doubt see downloading photos as a downer and deal-breaker, which would also, no doubt, be the fate of a “Rubin Romances Online.”

Morris Berg
A Jew who went from catcher to spy? The mysterious Morris (Mo) Berg, a Columbia Law School graduate, linguist, and not-too-terrific catcher with the Brooklyn Dodgers, among other teams, was better at the spy game. Berg, the son of Russian-Jewish immigrants, in deference to his father, left the game the day his papa died in 1942. Better at Japanese, German, and stealing “bomb info” than bases, the Office of Strategic Services (later, the CIA), sent him overseas in 1943 to assess how to deal with Werner Heisenberg, head of Nazi Germany’s atom-bomb project. When his extraordinary “game” ended at age 70 in 1972, Mo, who was laid to rest in Israel, was a winner.

Harvey Bernstein
And while we’re on the subject ... “Get Bernstein?” was the cry of FBI agents from J. Edgar down during WWII. Harvey Bernstein was the only FBI agent at the time who could farshtaist oral and written Yiddish and Hebrew. Should a suspicious “Aleph” or “Oy” appear in a document, the FBI geshreid (screamed) “Get Bernstein!” Once, when Bernstein was “gotten” to de-code the contents of a container found on Fifth Avenue, the “ominous” container was found to be ... a mezuzah! The message? The Shema. The Feds could quit the shvitzing, thanks to Bernstein, who received the highest commendations from the Bureau when he resigned in 1954.

Fred Lebow
Alas, We Jews know from running – but not as a sport, never mind a competition. But an MOT turned it into one of the greatest. The King of Marathons, was Orthodox Jew Fred Lebow, born Fischl Lebowitz in Transylvania in 1932. What Lebow started as a local run with 127 participants in 1970 became the New York City Marathon, the world’s largest with 30,000 runners. He was not only president of the New York Road Runners Club for over 20 years, Lebow competed in 1992, two years after he was diagnosed with cancer and given just months to live. He died in 1994, after running the greatest race – a life of courage up to the finish line.

The Band's Visit
Korach 5782: Visit to Lift the Spirit
That Time The Ivy League Found A Way To Limit Jewish Enrollment
Would You Rather Be Right or Happy?
Comments
MOST POPULAR IN Jewlarious
Our privacy policy