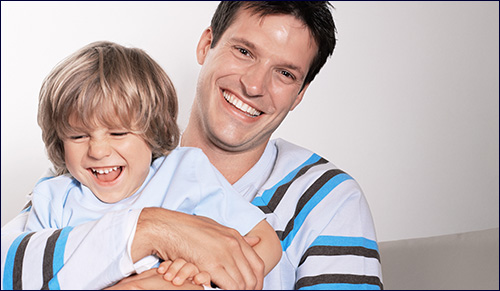 With Father’s Day around the corner, here’s our salute to some extraordinary Jewish fathers.

Make a speech in front of any group of Jews and ask them their first reactions to these two words: “Jewish Mother.” Wear protective gear. “Loves her kids – to death!” “Always with the food!” “She won’t take a ‘no.’” “Oy, the guilt!” Then, as the titters subside, you might hear: “Kids first.” “Smart.” “Funny.” “Determined.” “Cares.” And ... “I miss her.” Never in the history of any culture has the word “mother” evoked such connection.

Max proudly kept a photo of his son “Spock” in his barber shop and when kids asked for a “Spock” haircut he obliged – for 75 cents.

If our Jewish mamas have staked their emotional claim with intensity, Jewish papas on the other hand are at times shrouded in mystery. Today, while he’s often the titular head of the household (“Ask daddy”) who, like the old saw, makes the “Big Decisions,” he’s often back-seated, in stereotype and in media.

Yet, many of us have been blessed with extraordinary fathers. In their way, there was much more: Papa, the learned; the bearer of Big Principles; the Permission giver who took us by the hand out of mama’s grasping one, to introduce us to the world, even if he was out-voted by mama on the big sweet vs. sour gefilte issue.

As a writer, I prefer letting the words, the stories, evoke information and feeling. So this year I’ve devoted this column to giving you, my dear readers, a sense of some fascinating Jewish Fathers and sons.

Papa … At the Start, At the End

A legendary star in Yiddish Theater and mainstream media, Paul Muni (Frederich Meshilem Meier Weisenfreund) was born (1895) into show business in the Austro-Hungarian Empire. After coming to the U.S. with his parents, both Yiddish actors, Muni started in the Yiddish theater at age 12. His papa Nachum Favel Weisenfreund (known as Philip) who owned a theater in New York in the early 1900s, was a huge influence on the boy who would become one of the most renowned actors of his time starring in acclaimed vehicles such as the 1936 film “The Story of Louis Pasteur,” “The Good Earth” (1937) and the 1955 Broadway production of “Inherit the Wind.”

Muni once recalled a funny anecdote about his papa who was dedicated to Yiddish Theater: One day papa saw a Yiddish play in which the son of a great Rabbi was called home from the yeshiva to learn that his father was dead and his mother had quickly married his father's brother, who had now become the new Rabbinic leader. He didn’t realize he was watching a Yiddish version of “Hamlet.” Muni recalled that his dad was so affected by the production, he blurted out, "Now this is Yiddish theater!" His father’s death when Muni was in his teens was a lasting devastation. Yet, papa’s teachings remained throughout his life … and at the very end. In his youth he once told his father, “Papa, I’m hungry.” But not for food, he explained, “I want to be better.” In 1967, at age 72, the brilliant actor “of many faces,” in the hospital with a failing heart, opened his eyes, and, talking to a photograph of his father, said his last words — “Papa, I’m hungry.”

The late Leonard Nimoy, who died last February, was no doubt heavily influenced by his Orthodox Jewish father, Max. His parents snuck across the Russian-Polish border during the Soviet era, and settled in Boston, where Max became a popular local barber. Leonard, who spoke both Yiddish and Hebrew remained close to the Jewish community throughout his life. More, as fans know, he created the “Vulcan Salute” – a Jewish tribute. He explained (excerpted): "When I was about 8 years old, sitting in the synagogue at high holiday services with my family, there comes a moment when the congregation is blessed by (the Kohanim). When they give this blessing, you're supposed to avert your eyes. I peeked, and I saw these guys with their hands stretched out toward the congregation - in that split-fingered gesture. Sometime later, I learned that the shape that hand creates is the letter shin, the first letter in one of the names of the Almighty. So the suggestion is that they're using a symbol of God's name with their hands as they bless the congregation." While dad wanted his son to be a “professional,” he took great pride in Leonard’s success. Papa Max proudly kept a photo of “Spock” in his shop and when kids asked for a “Spock” haircut he obliged — for 75 cents.

In 1897, the fearless, five foot tall, 110 pound Sol Floersheim bought a ranch near Springer, New Mexico in 1897 and later opened stores in other New Mexico towns. In 1953, his son Carl wrote of his father’s exploits that included a meet-up with Billy the Kid, and his father’s skill at frontier medicine (he delivered 300 babies). Sol helped found Congregation Montefiore and wouldn’t abide anti-Semitism. When a young fellow referred to Sol, age 70, as “a dirty Jew,” Carl reported, “My father gave him such a licking!” More, in an era of exploitation, Sol treated his employees humanely and fairly.

“Come to Papa, Bubbeleh” ... was a line from one of Mickey Katz’s English-Yiddish parodies. Born in June, 1909, the musician-comedian who Yinglishized works like, The Barber of Shlemiel and Little Red Rosenberg, was not only a brilliant talent in his own right, but papa to the legendary Joel Grey and grandpapa to Jennifer! Once, after his opening number, an audience member stood and said, “Hey, Katz, I saw your boy Joel last night in “Cabaret.” He’s better than you.” “You haven’t seen me do anything yet,” Katz replied. “I’ve seen enough already,” said the woman.

It all started when Katz, at age 11, heard a clarinet concert at the Talmud Torah. A funny jazz musician with a flair for klezmer music and Jewish parodies was born. Being Jewish "was always popular in my house," recalled papa Katz. "The only people it wasn't popular with were those who were frightened." His work is now being revived by groups like the Klezmer Conservatory Band.

Dad’s Jewish pride informed son Joel who, when discussing his Broadway role in “The Grand Tour” (1979), said: “I’d never played a Jewish person before. It feels good.” Joel, who achieved stardom in Cabaret (1966), also headed up a committee to free ballet dancers Valery Panov, a Jew, and wife Galin from the Soviet Union, for which Grey received the Israel Humanitarian Award (1974) at the White House. In 1996, at a Jewish Community Federation event, he talked about his famous dad who taught him about life onstage and off, ending with a rendition of My Yiddishe Papa. The dynasty continues with Grey’s daughter, Jennifer who is an actress perhaps best known for her role as “Baby” in Dirty Dancing.

“This is my story. This is the sacrifice my father made. This was the gift he gave me.” – Giosue (Joshua)

Roberto Benigni’s 1997 film is a surreal fable about the Holocaust. Benigni, who won the Best Actor Oscar, played Guido, an Italian Jewish father who undertakes the mythical task of protecting his young child, Giosue, from the horrors of a concentration camp by turning it into a game.

GIOSUE: ... they’re always yelling. They’re really mean here.
GUIDO: Well yeah ... because first prize is so good. Everybody wants to win the tank so they have to be tough.
GIOSUE: How much longer till I see Mommy?
GUIDO: When the game’s over you’ll see her ...

The Jewish father is a complex pastiche for whom morality, ethics and trust is often taught by example. Responsibility is unquestioning. Love and protection is without qualification. Jewish principles aren’t merely guidelines, they are living values. Many a Jewish Father too, is a dreamer; and he dreams for us. And with such a guide there is no distance.