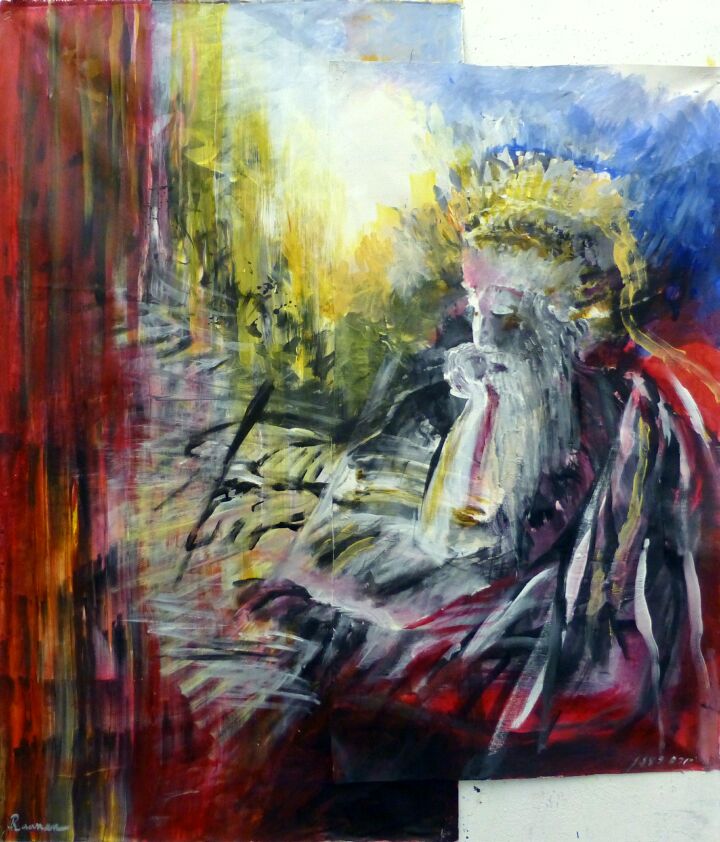 When he [the king] is seated upon his royal throne, he shall write for himself two copies of this Torah on a scroll...Let be with him, and he shall read from it all the days of his life... (Deuteronomy 17:18-19)

It is explained that a common person is obligated to write one Torah scroll for himself, but a king must write two (Sanhedrin 21b). One scroll is meant to remind him that God is the true King and that he needs to be humble in service to Divine authority, while his personal Torah scroll reminds him to invest in his private spiritual life.

This painting began as a small portrait of a king. Raanan sensed that the king was too cramped; there was no room for him to be writing. The king must go beyond himself - he must not only write but also contemplate what he is writing. So Raanan added another sheet of paper, larger than the first, and gave the king two sets of hands. The added space opens the painting up and gives it breadth and majesty. The luscious red of the background in the added area suggests the curtains of the Mishkan; or it might also refer to King David's wars. The rich bold strokes echo the intense energy that went into the holy endeavor of writing the scrolls. Yet the face of the king shines with an inner calm. A golden glow surrounds him as he serves God and his people with humility and faith.

Walk In My Ways

As the Stars of Heaven

Jacob's Ladder
It Takes A Lot Of Faith To Be An Atheist
How Instagram Brought Back This Nostalgic Soup
What Makes Eli Run?
Comments