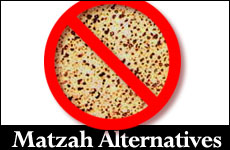 If someone has trouble eating matzah, what should they do on Seder night?

I recently received the following email:

My father is too old to eat regular matzah at the Seder. Does he have any other options if he wishes to fulfill the mitzvah?

There are many reasons why an individual might not be able to eat regular matzah at the Seder. So long as certain considerations are taken into account, there are ways to allow almost everyone to perform the mitzvah properly.

While fulfilling the mitzvah of matzah may seem very simple, there are actually several requirements that matzah must meet in order to be used at the Passover Seder. Some of these requirements are intrinsic to the matzah itself and some are peripheral.

For example, to fulfill the mitzvah of matzah on Seder night, one must own the matzah that he eats. If he is eating at someone else's Seder, he must either bring his own matzah or have the host "gift" him the matzah. Since we assume that the host wishes all guests at the Seder to carry out the mitzvah properly, one can generally rely on the fact the host has given all guests ownership in that matzah that they eat.

Matzah must also be produced for the sake of the mitzvah (lishma) and be "guarded" preferably from the time of harvesting, but at least from the time of kneading.1 It is this "guarding" that we refer to when we speak of shmura matzah for the Seder. None of these requirements have health implications.

However, some characteristics of the matzah do have an impact on health. The matzah may only be made from one of the five species of grain that can become chametz (leavened). These grains are wheat, rye, barley, spelt and oats. Since only these grains can become chametz, only these grains may be used for matzah. For a person with Celiac Disease, eating standard wheat matzah could be dangerous because it contains gluten (a protein found in wheat and other cereal grains). While wheat matzah is generally preferred, if someone has celiac disease, oat matzah (some types of which are marketed as gluten-free) is perfectly acceptable.2

Generally, a healthy person is not permitted to eat "egg matzah" on Passover.3 Since it is permitted for an elderly or sick person, one might think that egg matzah would be an ideal substitute for the person whose age or illness prevents them from eating regular matzah at the Seder. However, the mitzvah on Seder night can only be fulfilled with matzah made of flour and water, since the matzah eaten in commemoration of our sojourn in Egypt must be consider "poor man's bread" (lechem oni), a reminder of our plight as slaves. Egg matzah is considered "rich man's matzah" (matzah ashira) because it is baked with fruit juice instead of water.4

Nevertheless, there are acceptable alternatives. The best option is to break up the regular matzah into very small pieces, since this does not change its intrinsic nature. If it remains difficult to ingest because it is so dry, the elderly person may drink water with the matzah to help him swallow it easier.5

Another requirement is that the matzah retain its taste. This usually precludes altering the matzah in a way that would radically alter the flavor. Yet, a sick or elderly person who cannot swallow even broken-up matzah, may a priori soak it in cold water or if necessary warm water, even if it will become very soft, 6 so long as the matzah does not soak for more than 24 hours. 7 As a last resort, the matzah may be dipped in a beverage other than water. Some authorities even allow the matzah to be soaked in wine or fruit juice if necessary, although others rule that soaking in any liquid other than water impermissibly changes the taste of the matzah. 8

Even if someone cannot eat the minimum required measure of matzah, this does not mean that he should not eat any. Many rabbinic authorities rule that he should eat whatever he can, but should either not make a blessing, or he should have someone else at the Seder pronounce the blessing over the eating of matzah. This is not unanimous and there are also many rabbinic authorities who rule that there is no obligation to eat matzah if one cannot eat the minimum measure. 9

We must take health concerns very seriously even on Seder night. For instance, a diabetic must be very careful to dose their insulin appropriately and limit their caloric intake during the meal to allow for the eating of the matzah. Nonetheless, it is important to recognize that if eating matzah (or wine or marror) 10 will make someone ill, even if not seriously, he is not required to eat it. 11 If eating the matzah will make him seriously ill, then it is forbidden to do so. 12 Judaism does not encourage pious foolishness!

I hope that one of the ideas above will work for your father and that he will be able to join the rest of the Jewish people in the important mitzvah of eating matzah at the Seder.

Footnotes:
1 Unless the grinding process involves water, in which case shmira (guarding) is required from at least the time of grinding.
2 The following ruling from Nishmat Avraham, Orach Chaim, (English vol 1), p. 124 (273:C) is provided to aid those people suffering from Celiac Disease:
"One who suffers from Celiac Sprue, a gastrointestinal disorder, is forbidden to eat foods containing gluten such as bread made from wheat flour. He may suffer from severe diarrhea and gastrointestinal discomfort if he eats a product containing gluten. The halachot which follow are subject to the consent of the patient's specialist, who knows his case best. I only wish to provide broad guidelines. A gastroenterologist should be consulted in every case. If the patient's condition is so severe that he is unable to tolerate even the slightest amount of bread made from wheat flour without a severe, life-threatening exacerbation ensuing, he is halachically forbidden to eat such a product. . .
One may eat matzah made from any of the five different types of grain which in¬clude oats in order to fulfill his obligation to eat matzah during the seder. Therefore, if one suffers from Celiac Sprue, but not to the extent of having life-threatening reactions to gluten, he should attempt to obtain matzah made from oat flour. If he is able to obtain such matzah, he should, if his physician permits, eat the five kezeitim of matzah required by halachah during the seder. If he is unable to obtain oat flour matzot, and knows that he cannot tolerate even the slightest amount of gluten products without aggravating his condition, he is forbidden to eat matzah. However, if he knows from experience that he can tolerate a small amount of gluten without exacerbating his condition, he should act as follows: He should not eat any matzah during the entire meal. At the end of the meal he should wash his hands without reciting a blessing, say the blessings of hamotzi lechem min ha'aretz, and al achilat matzah, and then eat a kezayit of normal matza as the afikoman. In so doing, he fulfills the Torah obligation to eat matzah at the seder. "
3 This applies to all Ashkenazim and some Sefardim, depending on custom. Nevertheless, no one may eat egg matza to fulfill the mitzvah of motzei matza at the seder.
4 Shulchan Aruch, Orach Chaim 462:1
5 Responsa Binyan Tzion 29
6 Mishneh Brurah, Shulchan Aruch, Orach Chaim 461 s.k. 17. A healthy person only fulfills their obligation bedievad by soaking the matza.
7 ibid
8 Mishneh Brurah, Shulchan Aruch, Orach Chaim 461 s.k. 18
9 See Nishmat Avraham, Orach Chaim, English vol 1. p. 256-257 (461:A) for the list of multiple poskim on both sides of the issue.
10 Rav Ovadia Yosef, Chazon Ovadia p. 173
11 Mishneh Brurah, Shulchan Aruch, Orach Chaim 472 s.k. 35. See also Chazon Ovadia p. 125
12 Some rabbinic authorities rule that one fulfills the mitzvah through performing a sin (mitzva bo b'eveira- see Responsa Mahari Asad, Orach Chaim 160 and Responsa Tzitz Eliezer 2:43. Others rule that one fulfills no mitzvah at all if they eat matza knowing that it will endanger their life. See Responsa Maharam Schick, Oruch Chaim 266 and Responsa Minchas Yitzchak 4:102:2. See the Hebrew Nishmat Avraham, Orach Chaim 472 s.k. 2.

Seder for One: How to Make it Meaningful

What Makes It Kosher?

Laws of the Seder

A Passover Dictionary: What Do All These Strange Hebrew Terms Mean?
Faith: the Axis Upon Which the Wheel of Science Turns
Love - Not Just About Chemicals Anymore!
Is There a Moral Code in a Virtual World?
Comments
MOST POPULAR IN Passover
Our privacy policy