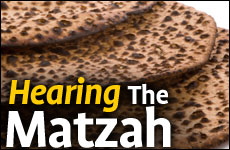 If the matzah could talk, what would we hear?

In the midst of my preparations for our family Seder last Passover, my precocious four-year-old grandson, Daniel, informed me that he would be "very quiet when eating matzah at the Seder." When I did not respond enthusiastically to this profound statement, he pursued the matter and said, "Don't you want to know why I will be very quiet when I eat matzah?"

I, being then quite occupied with such weighty matters as choosing the appropriate wines for the Seder, grunted offhandedly, "Tell me why, Daniel."

With a smile of wisdom that only children who are yet unaware of their limitations can muster, he said to me, "Because I want to hear the matzah."

"That's nice," I said, with my typical grandfatherly diffidence. I immediately thought that 'hearing' the matzah meant the snap, crackly, and pop sounds that only dry, crisp, well-baked Passover matzah could produce while being chewed in one's mouth. Maybe that is what Daniel meant as well. But I have since rethought the matter.

Matzah is accustomed to hearing what we have to say to it. Most of the ritual service of the Passover Haggadah is recited with the matzah uncovered, serving as the passive, inanimate listener to our tale of bondage and freedom, cruelty and redemption, chaos and purpose. The matzah hears our words and listens to our tale. But, I now thought, how meaningful it would be if, in the words of Daniel, we would "hear the matzah." I think that such a conversation would go something like this:

"Every empire was convinced that it was invincible and immortal. But I have seen them all pass."

"This is Seder number 3316 (the Exodus took place in the year 2448 from Creation) for me. I began in Egypt, traveled through the Sinai Desert, and took root in the Land of Israel. I was at the Temple in Jerusalem, the palace of David, the herdsman's hut on the Golan, and the merchant's home in ancient Jaffa. I was present at the hanging gardens of Babylon, the Acropolis of Athens, and the Forum in Rome. I have been in the Atlas Mountains of Morocco, the Alps of Switzerland, the plains of Catalonia, the vineyards of Provence and Champagne, and I witnessed the splendor of ancient Byzantium. I have seen Warsaw, Vilna, Kiev, Cracow, Moscow, Berlin, Paris, Kobe, Shanghai, Cochin, and Mumbai. I have been at Seder tables spread with white linen, laden with the finest china and most ornate silver serving pieces. I have also been in hidden, dark cellars in Seville and Barcelona, expelled from London and Oxford, and unaccountably and unjustly accused of blood libels in my preparation. I was also in Auschwitz and Bergen-Belsen, under siege in modern Jerusalem and Safed, in labor camps in Siberia, and I am still in hiding in Damascus and Teheran. I have been around and I have learned a thing or two.

"I have observed the passing of civilizations and empires. I have witnessed profound changes in the world order and in society's beliefs. Every empire was convinced that it was invincible and immortal. Every philosophy advanced itself as being the sole panacea for the world's ills. Aristotle and Augustine, Aquinas and Locke, Marx and Nietzsche, Kierkegaard and Russell, all postulated and proposed. Monarchy and feudalism, fascism and communism, all rose to structure society and improve human life. Reason and renaissance, humanism and socialism, imperialism and nationalism, fundamentalism and secularism, religious oppression and hedonism, all have had their day. I, as a lowly matzah, couldn't comment too loudly about these goings-on. But I have seen them all pass. Yet the struggle for personal freedom, for meaning and commitment in life, for peace and mutual understanding, for the sanctity of home and family is yet to be won. That is why I'm so delighted to have this little chat with you. I'm always thrilled to have someone who will listen to me.

"For a while, people, even my people, thought that I wouldn't be around much longer. But that was not true. I am now in Scarsdale and Beverly Hills, Brooklyn and Kansas City, Bogota and Sydney, Prague and even St. Petersburg (nee Leningrad). I am back home in Jerusalem and Hebron, Tiberias and Tel Aviv. In fact, I am present wherever people care and hope. are interested and loyal regarding their heritage, treasure old values and close family, and have proscribed the violence of hatred and the lure of temporary pleasures and hedonism, and instead have chosen the path of tradition and faith. In short, for anyone who will listen to me, I am still there."

Please pass the matzah, Daniel. I will be very quiet while eating it. I also want to hear the matzah.

Reprinted with permission from A Guide to Jewish Living, by Rabbi Berel Wein. This excerpt also appears on www.simpletoremember.com

Passover: In the Name of Love
G-d Time
Shavuot is The Holiday of Cheesecake and Blintzes
What Does Kosher Mean Literally?
Comments
MOST POPULAR IN Themes
Our privacy policy