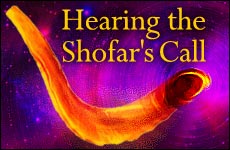 The shofar arouses the divine voice within, calling us back to our Source.

The shofar – it has an aura of awe and holiness about it. Its blast can shatter hearts of stone and wash away layers of complacency. Its call is capable of bringing us back to places inside ourselves impenetrable by any other means.

The Baal Shem Tov said, "In the palace of the king there are many chambers and each one needs a different key. There is one key, one instrument, however, which can open all the doors – the ax. The shofar is an ax. When a person passionately breaks his heart before the Almighty, he can smash any gate in the palace of the King of Kings."

The Baal Shem Tov is teaching that the shofar is an emotional, intuitive way of gaining access to the deepest recesses of our heart, of divine experiential knowledge. Its blast, this wordless sound, speaks to the heart in a way all the greatest words and insights cannot approach.

Which is it? Is shofar an emotional, intuitive experience, as the Baal Shem Tov suggests, or is it an intellectual one, as the words of King David imply?

The Dubno Maggid offers a parable that can perhaps help answer this question.

A poor farmer had a wealthy uncle who lived in the city and who once invited him for a visit. Thrilled with the invitation the farmer wasted no time setting out for his rich uncle's home. When he arrived he was greeted warmly and led immediately into a large dining hall with a long table.

As they spoke and shared stories about family, the uncle picked up a brass bell and clanged it. Immediately, a troop of servants emerged from side doors with trays of appetizers. The farmer had never seen such enticing food in his life. The servants returned to the kitchen quarters and the two relatives continued the conversation. Shortly thereafter, the uncle clanged the bell again and the servants reappeared, taking away the old trays and bringing out new ones with the first course. The farmer's eyes bulged. He had never seen such enormous quantities of food and such dedicated service.

This pattern continued throughout the evening. Each time the uncle rang the bell an entourage of servants answered his call, removing the old food and replacing it with the new. And with each clang the poor farmer was more dumbstruck.

When it was time to leave, the farmer thanked his uncle heartily and made a stop at a local store before rushing home. When he arrived he woke up his wife and excitedly told her. "You'll never believe what I did?"

"I spent our last penny!"

"Don't worry. I spent it on something you will thank me a million times for buying. Here, look." And he took out of his pouch a brass bell just like his uncle's. "This," the farmer said, "is a magic bell." His wife looked at him as if he was crazy. Undaunted, the man said, "You'll see, all I have to do is ring it and, immediately, servants will come out and serve us the most exquisite food which we can eat till our hearts content."

Of course, the servants didn't appear. The bell possessed no magic. It only worked when used as a signal to servants already waiting in the wings.

So, too, the shofar.

For the shofar to really take effect, we have to work on ourselves prior.

If, beforehand, we have no reservoir of response waiting in the wings then the shofar has as much ability to move us as that farmer's "magic" bell. For it to work we need to prepare. This is what King David meant when he emphasized the importance of "knowing" the tru'ah. We have to work on ourselves prior, inducing the proper frame of mind, for the shofar to really take effect. And this, indeed, is why we blow the shofar every weekday morning during the Hebrew month of Elul until the day before Rosh Hashana: to sensitize ourselves to its message.

The call of the shofar is the call to teshuva. Teshuva, often poorly translated as "repentance," literally means "return," and refers to "returning" to the path of ethics and spirituality outlined in the Torah. Maimonides, however, isn't just proposing that the shofar beckons us to undertake an external teshuva. It is a teshuva that leads us to "remember our Creator."

Sometimes we can do teshuva on particular wrongdoings and not really get to the root of the problem. As long as we attend only the symptoms but neglect the central cause, we will continually find ourselves fixing secondary problems. The shofar reminds us to address the core: to remember our Creator. Every failing is ultimately a type of forgetting that we live in the presence of God. Doing teshuva means getting to the root of the problem and deepening our awareness of God.

There's an interesting legal question discussed in the Talmud concerning a case of hearing a shofar that was placed inside another shofar: Has one fulfilled his obligation through hearing the sound from such a double-shofar?

The answer is, eem kol p'nimi shoma, yotza – "if the voice of the inner [shofar] is heard, he has fulfilled his obligation." He has to make sure he is hearing the sound of the inside shofar, not the outside one.

In a metaphorical sense, this can be interpreted, "if the voice of the inner [person] heard [the shofar] he has fulfilled his obligation." In other words, the purpose of shofar is to evoke a reaction in the "inner" person – kol p'nimi. The shofar is not merely a sound we hear with our physical ears, but a call we perceive with our inner ear. shofar is more than noise, but a voice arousing the divine voice within our own nethermost selves and calling us back to our Source.

And this is why the blessing over the shofar is worded, "Blessed are You… who commanded us to hear the voice of the shofar." The blessing is not "…who commanded us to blow [lit'koa] shofar," but to "hear [lishmoa] the shofar." We have to hear it. It has to affect us. Its blast must echo down to the nethermost chambers of our souls' forgotten depths. We have to return to our kol p'nimi, our "inner voice" – that part of ourselves made in the image of God. If we do so, we will automatically find ourselves transformed in other ways.

God, who created the first human being on Rosh Hashana, first created him from the ground. "And God formed the human from the dust of the earth…" The human being was physical. Afterwards, however, the Torah informs us that God blew the "breath" of life into him – and man became a spiritual being.

We are physical human beings. We cannot avoid the pitfalls of human frailty. And we are not supposed to deny our physical natures. Yet in living a physical life even our best efforts cannot prevent at least occasional backslidings and failures. Life perforce produces a degree of soul alienation. We become alienated from our soul-self and identify with our non-soul self, our shadow. Hearing the shofar is meant get us back in touch with our soul-self. It helps us intuit our true self, our deepest, original form as a creation made b'tzelem Elokim, in the Divine Image.

The physical shofar is nothing more than the hollow horn of a ram. When the breath of a human being is blown through it, however, it undergoes a transformation. It becomes a living embodiment of the heart and emotion of the human being expressing the Divine Self it senses pulsing within, crying out to its Maker.

The Science of Shofar

Shofar: The Call of Love

The Sound of Heaven
Olivia Newton John’s Grandfather was a Nobel-Prize Winning Jewish Physicist
Don’t Believe in Other Gods Versus God is One
Seeing Without Eyes
Comments
MOST POPULAR IN The High Holidays
Our privacy policy
Aish.com Is Looking for Great Writers