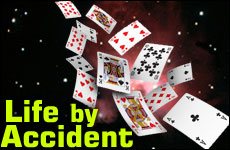 The odds of random life are so improbable, believing it requires a gigantic leap of faith.

The Exodus from Egypt, culminating in the receiving of the Torah, is the foundation of our faith.

Others religions around the world also have pivotal events from which much of their theology emerges. Atheism is no different. For an atheist, the accidental, spontaneous generation of life from inanimate minerals is essential to their core beliefs. It is the foundation of the philosophy that people are no more than a collection of simple particles. Just as non-living particles have no moral responsibilities; neither do the humans that contain them. Their premise is that the span of hundreds of millions of years from the beginning of planet Earth to the present is quite long enough for generating the millions of species we find here [1]. The only alternative to life by accident is the existence of a Creator which would be unacceptable to them.

Thus, just like the Jews stand upon the Exodus from Egypt emerging from slavery to freedom, so do the atheists rely on their Exodus from the Primordial Soup of mud to salamanders as the foundation of their faith.

Let me start by admitting that I am not nearly smart enough to calculate the probability of creating life. But I can study a much simpler problem and show that the simpler problem is surprisingly impossible, from which we can infer that the more complicated problem is at least as impossible.

Consider an ordinary deck of playing 52 playing cards. Let's presume that if we could generate a certain sequence of cards accidentally, then we could also generate life accidentally. After all, a fundamental key to life is DNA, which is a long string of molecules strung together. The smallest known DNA string has over 490,000 nucleotides [2], each nucleotide being itself a very complicated structure [3]. This is may be like comparing scaling Mount Everest to climbing a six-foot step-ladder. But let's see what happens.

So, for starters how many ways can we arrange a deck of cards? Start by selecting one card. Since there are 52 cards in the deck, you have 52 different ways of selecting the first card. Now, select another card. There are only 51 left. So for each of the 52 ways you could have selected the first card, there are 51 more ways of selecting a second card. For two cards, there are 52x51 or 2652 combinations. There are now 50 cards left for the third selection for a total of 50x2652 or 132,600 combinations. Repeating this pattern for all 52 cards gives the total number of combinations as 52x51x50x49x...x1. This pattern is called a factorial in mathematics. A spreadsheet program will compute this quite readily giving the result 8.06x1067 (give or take a few vigintillion [4]).

Well what does that mean? Basically, it is 8 followed by 67 zeros. The problem with numbers this big is that it is hard to get an appreciation as to how enormous they really are. To get a glimpse of how hard it would be to get one specific series of cards out of all the possibilities we'll do a little thought experiment. Let every atom on planet Earth help us generate combinations of cards. Note that about 100 trillion iron atoms can fit on the top of a pin (see [5] for the size of a pin and [6] for the size of an iron atom). That's a lot. But how many atoms are in the whole planet (which is much bigger than the head of a pin)?

This is not too hard to figure out (though you may want to skip to the next paragraph if math makes you queasy). The mass of the Earth is 6x1024kg [7] and the Earth is made up of various elements in various proportions [8]. From these two facts we can get the mass of each element. From a periodic table of elements, we can find the atomic mass of each element [9]. Dividing the mass by the atomic mass gives the moles of each element (remember to convert the mass from kilograms to grams). Multiplying moles by Avogadro's number (6.02x1023 atoms/mole) [10] gives the number of atoms of each element. See the following table for the results of the calculations.

Well, if you survived that we can now get to the fun stuff. You see, there are about 1.3x1050 atoms on our planet. Let's give every atom on the planet a deck of cards and instruct each atom to shuffle those cards once per second. Now with the cooperation of every atom on the entire planet in our miniature life-generating experiment, how long do we have to wait to get our single string of cards? The answer is simple. Take the number of card combinations and divide by the number of atoms on the planet. 8.06x1067 / 1.3x1050 = 6.2x1017 seconds. Given 60 seconds per minute, 60 minutes per hour, 24 hours per day, 365.25 days per year. This experiment will take 19.65 billion years! Scientists give our universe only 14 billion years [11]. We cannot get one series of a deck of cards within the age of the Universe. We cannot climb our step ladder, let alone scale Mount Everest.

We cannot get one series of a deck of cards within the age of the Universe.

There are several things that made our experiment much easier than the real-life situation. For example, we used every atom of the Earth, not just the small fraction of stuff on the surface. It is also important to note the explosion of improbability in our experiment. Just for laughs, let's add the jokers to the deck of cards (just two more cards for a total of 54). Now the experiment will take 2862 (i.e. 53x54) times longer, 5.6 trillion years, or about 4000 times the age of the Universe! Don't hold your breath.

Since this was so much fun, let's take it one step farther. We will add 21 more cards for a total of 75. Rather than comparing scaling Mount Everest to climbing a six-foot ladder we will use a nine-foot ladder.

Forming a single DNA strand is extremely more complex than lining up a few playing cards. And DNA itself is not life. It must exist within a living cell that has ribosomes, plasmids, cytoplasm and all sorts of other stuff. (Check out the picture on Wikipedia [15].) To expect all of this to have occurred on our humble planet within a mere few hundred million years requires a tremendous leap of faith most people would not prepared to make.

Dr. Horowitz received his Ph.D. in physics from the University of California - Davis in 1987. After a few years as a physicist, he moved on to network and systems engineering. He currently runs an engineering consulting firm in Baltimore, Maryland. At home he enjoys photography, bird watching and fiddling around with big numbers.

The Song of the Dove

The Song of the Grapevine

Archaeology and the Destruction of Sodom
Olivia Newton John’s Grandfather was a Nobel-Prize Winning Jewish Physicist
Don’t Believe in Other Gods Versus God is One
Seeing Without Eyes
Comments
MOST POPULAR IN Current Issues
Our privacy policy
Aish.com Is Looking for Great Writers