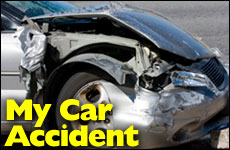 "I'm a good person," I told myself, convinced that this was an arbitrary act on God's part and indignant that it happened to me.

It was hurtling towards me in slow motion – a Honda, candy apple red – and I knew we were going to collide. He hadn't seen me inching into the intersection, behind the big black van to my left.

We crashed with a sickening crunch of metal on metal and the haunting screeches of brakes being pressed a little too late. I went into shock. My best friend, who was in the car with me, took charge and started making phone calls, first to the police, and then to my mother. I vaguely remember a Hatzalah EMT volunteer holding my neck in place and asking me my name. I don't think I answered. I wasn't capable of speech at the time. The crash kept playing over and over in my head, like a movie reel stuck on one scene.

I was ushered into an ambulance and taken to a hospital for CT scans and X-rays. All I can remember is the nauseating feeling of riding horizontally in the speeding ambulance, trying to keep myself calm and attempting to ignore the images in my head that kept playing incessantly, forcing me to relive the collision.

The Honda had smashed straight into the front of my car, destroying the engine completely.

I emerged from shock at the hospital to see my mother and father staring at me, worry written all over their faces. My mother looked as though she was going to be sick. Yet the prognosis was good: I had whiplash and a golf ball sized hematoma on the side of my head. A CT scan had been ordered to check for internal bleeding but the chances were unlikely; I hadn't blacked out and a significant amount of time had passed since the accident and I was still conscious. Under the circumstances, I was lucky.

My car had been totaled, my mother informed me. The Honda had smashed straight into the front of my car, destroying the engine completely. My mother's eyes were glossy and she looked a few minutes away from passing out herself. My father had brought me food and a book to read. It was interesting to see them both in the room with me, united in their concern for me and my well-being.

After a number of hours in the hospital I was discharged with a neck-brace and a prescription for enough sedatives to take down a team of racehorses. I was told to take it easy for the next week while my muscles attempted to release from spasm. My parents bade farewell to each other and I went home with my mother. My fiance was there waiting for me, as he had been for the past five hours while I was at the hospital. I spent some time reliving the details of the accident and talking it out with him and then collapsed under the influence of the sedatives.

I spent the next few days doing absolutely nothing. I was too sore and sick to go anywhere but not sick enough to evade boredom, so I sat in bed, frustrated with my current situation and feeling very sorry for myself. Instead of evaluating what had happened and what God might have wanted me to learn from the crash, I chose to wallow in self pity and became more and more morose as the hours passed.

"I'm a good person," I told myself, thoroughly convinced that this had been an arbitrary act on God's part and indignant that it happened to me. I couldn't imagine life without my car and hated the idea of being chauffeured by my parents, fiance or brother. Plus the spasms in my neck were really getting on my nerves. I couldn't imagine that I had done anything to deserve the extremely annoying situation I now found myself in.

I wallowed for two days, drawing further and further into myself, until my brother snapped me out of my mood with a comment that hadn't even been meant for me.

"I've been so much more cautious since Michal's accident because now I see that even safe drivers can get into trouble," I overheard him telling my younger sister a day or two after the accident. The comment completely changed my perspective on my collision.

Until that point my 17-year-old brother had been a bit of a reckless driver, cutting corners and driving too fast when he had the opportunity. Despite the number of talks my mother had with him, my brother had shown no real interest in slowing down or exercising more caution than he felt was necessary on the road. Hearing that my accident had convinced him to become a more responsible driver filled me with a sense of purpose. Was this the reason I had gotten into an accident in the first place?

The more I contemplated the accident, the more I uncovered hidden lessons within the collision.

I started to examine my situation. The more I contemplated the accident, the more I uncovered hidden lessons within the collision. Lessons like appreciating the fact that I had the privilege of owning my own, brand-new car at the age of 20, or being thankful that it was my car that was completely totaled, not my body, and most importantly, an appreciation of God's love for me. The red Honda hit so hard it completely destroyed the front of my car and totaled my engine, but thank God, I walked away virtually unscathed with only minor muscle damage and a bump on the top of my head. It was truly a miracle.

I thought about how my accident brought both my parents together in the same hospital room, for over five hours, yet not one word of hostility had been exchanged between them, a miracle in its own right. The more I mused over the hidden blessings in what had once looked like a curse, my mood changed from morbid self pity to gratitude and understanding. I thanked God for allowing my accident to serve as a lesson for my brother and for opening my eyes to the miracle I had witnessed, and all the miracles He does for me on a daily basis.

I recovered quickly, thank God, and by the end of the week I was driving again, albeit cautiously. But my experience had revamped my connection with God and my appreciation for all the things I had taken for granted, like my car and my health. I regret the fact that it took a car accident to awaken me to all the blessings in my life, but it did the trick.

I still keep my neck brace as a reminder that God does miracles, both big and small, for me every day. And whenever I feel myself becoming entitled or unappreciative, I open my closet door and stare at my neck brace and remind myself of what a wonderful gift it is to be alive, healthy, and happy.

Michal Steinberg is a freelance writer whose articles have been published in numerous literary publications, including literary magazines and local news papers. Along with building her writing career, Michal is studing for her degree in Graphic and Media Design.

The College Essay I Didn’t Submit

How I Knew I Wasn't a Loser

Jews and Power: Ethics of the Fathers, 2:3

Nightbirde's Gift to Humanity: Through Her Death We Can Learn How to Live
Korach 5782: Visit to Lift the Spirit
That Time The Ivy League Found A Way To Limit Jewish Enrollment
Would You Rather Be Right or Happy?
Comments
MOST POPULAR IN Spirituality
Our privacy policy