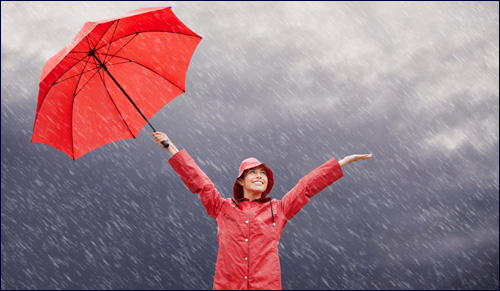 Things to know while praying for rain.

Each autumn, during the Simchat Torah Mussaf service, Jews around the world begin reciting a prayer for rain, praising the Divine for providing the essential miracle of rainfall.

In celebration of this year’s first week of this powerful prayer, here are 11 surprising facts about rain.

They’re shaped more like hamburger buns. The speed at which rain falls flattens out drops, making them flatter on the bottom than the top.

The driest place on earth isn’t over the desert.

The continent with the lowest rainfall is snow-covered Antarctica which receives just 6.5 inches of rain or snow annually, making it the driest continent on earth. (In comparison, North America receives an average of 256 inches of rain annually.)

Rain has a smell.

It comes from the Earth: some plants and soil-dwelling bacteria excrete chemicals into the earth that are released into the air when rain falls, moistening the ground in which these chemicals reside. The pleasant smell that results is called “petrichor” and is associated with the fresh feeling we experience after a rain shower.

Reflecting the understanding that rain comes from the Divine, Judaism contains blessings to say over rain-related phenomena. Upon hearing thunder, it’s customary to say “Blessed are You, Lord our God, King of the Universe, for His strength and His power fill the universe.” Over lighting, we praise God “who makes the work of Creation”. After seeing a rainbow, we bless God as well.

Rain doesn’t start off as rain.

Up in the clouds, rain most often starts off as snow. Clouds are made of freezing-cold water droplets and tiny crystals of ice. In most rains, this cold water adheres to ice, forming nascent drops that then fall out of the clouds. As they descend towards the relative warmth of the earth’s surface, they melt and become rain.

In the Torah, rain has a special meaning.

In the Torah, rain is a reward for following God’s laws: “If you follow My laws and are careful to keep My commandments, I will provide you with rains at the right time, so that the land will bear its crops and the trees of the field will provide fruit” (Leviticus 26:3). Conversely, the Torah warns, if the Jews fail to follow Divine statues, God will make their “skies like iron” from which no rain will fall (26:18).

Rainbows signify a promise in Judaism.

The Torah recounts how, many years after the creation of the world, it had become morally corrupt and God sent a flood to wipe out every living thing. Only Noah and his family survived. After the flood subsided, they turned to God, who promised He would never again destroy the world in this manner, and chose the rainbow to be His special sign of this promise. “I have set My rainbow in the cloud, and it shall be a sign of the covenant between Me and the earth” (Genesis 9:13). To this day, Jews recite a special blessing upon seeing a rainbow in commemoration of this promise.

“Phantom rain” occurs in extremely hot climates. Sheets of rain are visible in the sky, but high land temperatures cause the water to heat and evaporate before it ever reaches the ground.

According to Britain’s Met Office, raindrops fall at an average speed of about 14 miles per hour. At that speed, a raindrop falling from a typical cloud height of 2,500 feet would take a little more than two minutes to reach the ground. Larger raindrops can reach speeds of up to 20 miles per hour, while tiny raindrops can take up to seven minutes to fall from 2,500 feet.

Rain is compared to blessings.

In the Talmud, abundant rain is compared to blessings streaming down on us from Above, strengthening and nourishing us spiritually just as rain sustains us physically. Rabbi Yehuda compared “the Day of the Rains” to the “Giving of the Torah”, noting that the Torah compares Torah to life-giving rain: “My teaching shall drop like rain” (Deuteronomy 32:2). (Taanit 7a)

8 Tips for Getting Fit

Professor Hillel Furstenberg: In His Prime

The Real Story Behind the Covid-19 Vaccine Story

Going Extinct?
The Blue Beyond
Great Place to Live
Is Eating Supposed To Be Spiritual?
Comments
MOST POPULAR IN Current Issues
Our privacy policy