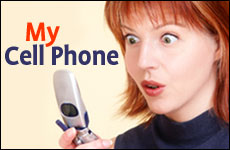 I wanted to start keeping Shabbat, but it meant shutting off the cell phone I was enslaved to.

For seven years I was a slave to my cell phone.

It would be with me, 24 hours a day, 7 days a week. It prevented me from taking trips out of town -- what if my phone was out of my coverage area? When my friends invited me to go to a dude ranch for a relaxing weekend, I flatly refused to join them. Way out there "on the range", for sure my phone was out of range! And how could I take the phone with me for swimming and horseback riding? I'd have to leave my cell phone behind. No way. I'd rather leave myself behind with it. And I did.

If I went to an important event, I would put my cell phone on vibrate, but God forbid it should ever go off completely. What if there would be that fateful call to change my life? "You've won the lottery!", or "We want you to star in our next film!"

I'd sleep with the phone beside my head. (Radiation? Who cares about that? What if Spielberg calls me?)

In a class, a rabbi told a story about how he and his wife had a Shabbat guest who heard the phone in their house ringing. It was Shabbat so no one picked it up. The guest was so disturbed by this he offered to get it himself. The rabbi responded, "I am not a slave to the phone. Today I am free of it. Let it ring."

On Shabbat, the phone had no power over his life, and he was truly free.

Looking at my own cell phone attached to my side, I realized I never felt the same freedom. I couldn't even imagine such freedom. I was a slave to that phone and had no idea how I could ever get out.

I began to take on small, significant steps in Judaism; the classes I was attending seemed all the more relevant in my life. My relationships were more meaningful. I had a great community behind me. And then there was my cell phone. Although I wanted to start keeping Shabbat, it meant shutting off my cell phone. Literally, cutting off the power. I balked.

One Friday afternoon, I was cat-sitting in a rabbi's house, while he and his family were away. Next door was a rabbi. Down the block was a rabbi. They were everywhere! And I thought to myself, This Shabbat -- and maybe just this once -- I'm really going to do it, and not just half-way.

I set up everything I needed for my Shabbat experience. It was empowering. I actually enjoyed my preparation for this big day in my life. And then I looked at the cell phone. Was I really going to be able to let go?

That moment, the words from the class came back to me, and I realized that I wanted to get out of slavery. I looked down at my cell phone and decided that today would be the day I would no longer be a slave. I pressed the button and turned it off. I was finally free.

During that first Shabbat, and in many others since then, (and even on the occasional weekday!) I have felt the power of true freedom and tranquility. I am no longer a slave; I've got the power.

It's Still Shabbat
Don’t Believe in Other Gods Versus God is One
Seeing Without Eyes
Why Shouldn’t We Eat Whatever We Want?
Comments
MOST POPULAR IN Shabbat
Our privacy policy
Aish.com Is Looking for Great Writers