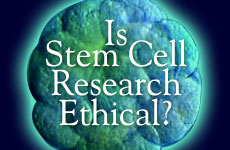 Is the destruction of preexisting pre-embryos permitted for stem cell research?

Today, a man lies dying of liver failure in a hospital. There is little expectation that he will be one of the lucky few to receive a transplant before he becomes too ill to save. Even if he did receive a transplant, he will be burdened with taking multiple anti-rejection drugs for the rest of his life, which in and of themselves would significantly compromise his health.

Tomorrow, scientists develop a method to build this man a new liver, one that would be a perfect match for him, requiring no anti-rejection drugs whatsoever. There is a catch. To perfect such a solution would require the destruction of other lives. Would Judaism sanction such a solution?

When The Fetus Is A Threat To Life

One may kill someone who is unjustly pursuing a third party to kill him.

But, what if the life that would need to be sacrificed was that of a fetus? May we permit abortion to save the life of an already born person? The Mishna clearly states that if the life of a woman in labor is threatened by her fetus, the fetus should be aborted. But once a portion of the baby has emerged, we may not abort the fetus, because "one may not set aside one person's life for the sake of another."

The principle behind this ruling is that one may kill someone who is unjustly pursuing a third party to kill him. Since the fetus, who is not yet considered a "complete" person, is "pursuing" the mother in a way that will inevitably result in her death, we may kill it first. But, once it has even partially emerged, it is considered a full-fledged person. Now we are faced with a dilemma, states Rabbi Moshe Feinstein, one of the most respected rabbis of the 20th century: who is pursuing whom?

When Pursuing Each Other

Imagine that you are transported back in time to Weehawken, New Jersey, on July 11, 1804. As you step out of the time machine you see Aaron Burr, pulling out a revolver to shoot Alexander Hamilton, former U.S. Treasury Secretary. Simultaneously, you see Hamilton also drawing his revolver to kill Burr! What should you do? Kill Burr? Kill Hamilton? Jewish law would rule that you may kill neither, because they are pursuing each other and you do not know which one, if either, is an innocent party.

In our case of the baby struggling to be born at the expense of the mother and the mother struggling to survive at the expense of the fetus, are not the baby and the mother each "pursuing" the other? In such a case, the general rule is that we may not choose either, since each is a complete and autonomous person, and each is both the pursuer and the pursued. Luckily for us, these scenarios are very rare occurrences in our day thanks to Caesarian sections.

A life-threatening situation for another adult does not justify killing a fetus.

But, since the rationale for abortion in Jewish law is based on the fetus being a pursuer of the mother, a life-threatening situation for another adult would not justify our killing a fetus, since the fetus does not threaten the life of anyone except the mother. Therefore, we cannot allow abortion, even to save the life of our patient with liver failure.

But there is hope. What if the scientists "merely" needed to destroy excess fertilized eggs from in vitro fertilization (IVF) procedures that are only a few days old and have not yet been implanted in a woman's uterus? Is the destruction of these "pre-embryos" ethically acceptable to us? That is exactly the debate that currently rages regarding stem cell research.

While stem cells can be derived from aborted fetuses and even adults, the best source for stem cells is the small clump of cells that compose the early zygote only a few days following conception. Therefore, to best investigate the latent possibilities inherent in stem cells, scientists wish to use the approximately 100,000 "excess" frozen pre-embryos that are "left over" from earlier IVF attempts. Is it ethical to allow the destruction of pre-embryos to obtain stem cells for research that may some day save thousands of lives?

Early stem cells have the ability to differentiate into every cell of the human body, potentially forming an entire fetus. If we were able to manipulate the conditions controlling cellular differentiation, we might create replacement cells and organs, potentially curing illnesses such as diabetes, Alzheimer's disease, and Parkinson's disease.

But, the ultimate promise of stem cell technology would be to combine it with cloning. Imagine our man dying of liver failure. If we could clone one of his cells, but instead of allowing the cloned cell to develop into a fetus, we might place it into the appropriate environment that would cause it to differentiate into a liver that would be virtually genetically identical to that of the sick man. If we could "grow" this liver to maturity, we could offer the sick man a liver transplant without the risk of rejection and without the need for anti-rejection drugs.

Unfortunately, we still do not know if we can successfully clone a human, nor are we sure what practical value can be derived from stem cells. It will require years of very expensive, labor-intensive research to determine the potential that stem cells hold for the treatment, palliation, and cure of human illness.

Are "Pre-Embryos" Included in the Prohibition of Abortion?

Is it ethical to sacrifice pre-embryos to experiment with their stem cells in the hope of some day saving many lives? While many ethical issues arise, the key one is whether pre-embryos are included in the prohibition of abortion. The consensus thus far is that it an embryo is not protected by the limitations on abortion until it is implanted in a woman. Most rationales given for why the Torah forbids abortion, except to save the mother's life, revolve around the fetus being within the woman.

An embryo is not protected by the limitations on abortion, until it is implanted in a woman.

The logic of only ascribing humanity to an embryo once it is implanted in the womb is simple. Left undisturbed, an embryo in its mother's womb will most likely continue to grow and reach parturition. But the pre-embryo created by IVF, if left untouched in its "test tube," will die. The pre-embryo requires active intervention to even reach a situation which we consider to be true potential life. The alternative to this reasoning would be to argue that the killing of adult skin cells is forbidden, since a person could potentially be cloned from any cell in an adult's body.

Additionally, there is another sound reason to allow destruction of pre-embryos to save a life. When necessary to save a life, Judaism requires us to transgress all of the laws in the Torah, with the exception of murder, adultery, and idol worship. For example, if someone is gravely ill on Yom Kippur, we would drive in a car to get them non-kosher food even if necessary to save their life. If a pre-embryo is not covered by the Biblical commandment of "thou shall not murder," then we might allow destroying a pre-embryo for its stem cells if it would save the life of an already born person. We are left with the question of whether research is considered the saving of a life. This argument becomes even more appealing if concrete life-saving medical treatments can be demonstrated.

For these as well as many other reasons, many contemporary halachic decisors have ruled that the destruction of preexisting pre-embryos for stem cell research is permitted (see my more extensive article on stem cell research and Jewish Law: http://www.jlaw.com/Articles/stemcellres.html)

Cheapening the Value of Human Life

Nevertheless, many Rabbis oppose the deliberate creation of pre-embryos for the purpose of their destruction, as this would cheapen the value of human life.

The halachic process offers fascinating insight into all areas of ethics, including biomedical ethics. It gives us the opportunity to evaluate the explosion of technology that surrounds us through the lens of the Torah, insuring that we remain the masters of our science and not vice versa. Judaism has no issue with technology. It only requires the ethical and responsible use of science to better our lives. Let us pray that tomorrow, our patient with liver failure will be cured.