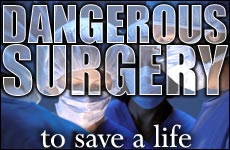 Considering the tremendous value Judaism places on every moment of life, does Jewish law permit one to undergo surgery that carries a very high risk of death?

A 75-year-old woman is informed that she has severe narrowing of her aortic valve, a diagnosis that carries a very high risk of death within one year. She is also told that while there is surgery that is proven to correct her type of ailment, she is a very poor operative candidate and that she has a high risk of dying on the operating table. Nevertheless, if she survives the surgery for valve replacement, her cardiac problem will be cured and she could live many more years.

Considering the tremendous value Judaism places on every moment of life and the prohibition of shortening life by even moments, does Jewish law permit her to undergo the surgery?

Three hundred years ago, Rabbi Yaakov Reischer (1670-1733)1 was asked whether a critically ill patient with a life expectancy of days, on whom the doctors had given up hope of cure, could undergo an experimental treatment that would either kill him immediately or possibly cure him. He set a modern precedent in Jewish law by permitting a patient to risk the 'short-term' life that he could expect if not treated for a chance at 'long-term' life via a risky attempt at cure.

Rabbi Reischer brought a clear proof from a fascinating story in the Prophets.2 The Assyrian army, not known for its kind treatment of POWs, besieged Jerusalem causing a tremendous famine. Four leprous men were outside the walls of the city and starving to death. "…and they said to each other, 'Why are we sitting here until we die? If we say that we will come into the city, with the famine in the city, we will die there, and if we stay here we will die. So now, now let us go and let us defect to the Aramean camp. If they spare us we will live, and if they kill us we will die.'"

The Talmud3 uses this story to justify risking remaining short-term life for even a small chance of long-term survival. The Talmud asks, "But what of the limited time [that would have been his] that he stands to lose if the physician kills him right away? The answer is that such limited duration of life can be disregarded [in this case]. And how do we know this? It is learned from the story of the four lepers."

How short of a life expectancy justifies gambling one's remaining life on a cure and how remote of a cure may be attempted? There is significant debate regarding how good the odds of cure must be to permit therapy. Opinions range from requiring a greater than 50% chance of cure, to allowing even a "remote" chance of cure. While Rabbi Reischer and the Talmud deal with cases of only a few days life expectancy, 20th century rabbinical experts have clearly explained that even longer periods of time are still considered short-term life in Jewish law.

The leader of early 20th century European Jewry, Rabbi Chaim Ozer Grodzenski (1863-1940), was asked a question regarding dangerous surgery in a patient with a maximal life expectancy of six months. He wrote that based upon the Talmud and the ruling in the Sh'vus Yaakov, "one may attempt dangerous treatment even if there is only a remote chance [of cure]… and it is logical that there is no distinction between short-term life of a few days or a few months".4

Rabbi Moshe Feinstein opines that dangerous therapy is permitted even if there is even a remote chance of cure.

Rabbi Moshe Feinstein (1895-1986), the preeminent American halachic authority, clearly states that any life expectancy less than a year can be considered 'short-term' life. In two responsas eleven years apart, he reiterates his opinion that dangerous therapy is permitted even if there is even a remote chance of cure.5

Some Rabbinic authorities require that the treatment be known to be efficacious for the patient's illness. There is an important distinction between a therapy that is known to work but is very risky and one that is completely experimental with no reason to believe that the risk promises any benefit. In the first situation, the treatment is known to be appropriate, but dangerous. In the second situation, we do not even know if the risky treatment could possibly work.

A fascinating related question is whether one may risk his life for relief of extreme pain from a condition that is not life-threatening. 250 years ago, Rabbi Yaakov Emden (1697-1776) ruled6 that "in such cases we allow them to do as they wish without protesting because sometimes they are cured and saved." Nevertheless, he subsequently states: "In any event, people should be concerned about themselves and when there is no danger in the suffering, it is not proper to [undergo dangerous surgery for relief of pain alone]… a person is not permitted to enter into a situation of possible danger, for even though many did so and were saved, many hastened their deaths by such surgery. Therefore, it is not completely permitted."

The consensus among experts in Jewish law is that one should not undergo significant risk for a non-life-threatening condition.

Based upon the above considerations, all opinions would allow our patient to undergo the risky valve replacement if the probability of success is greater than 50%. If the odds were less than 50%, most experts would still allow the surgery, while a few might not. Nevertheless, the consensus of Jewish law is that there is no obligation to undergo very dangerous treatment, even if refusal of the treatment means certain death.

Is Stem Cell Research Ethical?
Blessing on Chewing Gum
Was Rahab a Prostitute?
Extras In Our Own Epic
Comments
MOST POPULAR IN Interpersonal
Our privacy policy