Shades of the Shoah 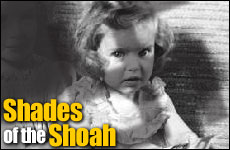 As a Jew-in-the-making, I am heartened and intimidated by my obligation to those who perished in the Holocaust.

A genealogy magazine hired me to write a story about Evelyne Haendel, a Belgian woman who had been one of the "hidden children" of World War II. To escape deportation to the concentration camps, thousands of these Jewish children were hidden with Christian families in Europe, forced to forget their religion and even their names, just to survive. Many never saw any blood-relatives again. 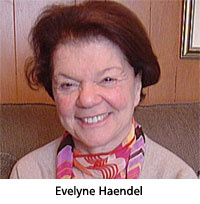 I planned to talk with Evelyne for approximately 40 minutes about her search for surviving family members. That one interview stretched into a two-hour conversation that shook me -- a journalist and soon-to-be Jewish convert -- to my core.

In light of her life experience, Evelyne's spirit and optimism are even more striking. As she opened up and shared the most personal details of her story, her voice at times was strong and full of laughter; other times, it was small and quiet. All the while, I kept typing. Otherwise, I would have lost it.

I thanked God for my computer keyboard when she described her Aunt Sasha's return from Auschwitz. How stark and frail her appearance had been, how shaken Sasha was by the loss of her own daughter in the camps that she left Evelyne with her adoptive, non-Jewish family while she fled to Australia to build a new life.

I kept my fingers busy as Evelyne described her visit to Auschwitz as an adult with a Star of David memorial wreath -- because this camp was the only cemetery she had to visit in memory of her parents. How she wandered the site, trying to find an appropriate resting place for the wreath, until she at last floated it on the surface of a small pond near one of the crematoria, knowing ashes of the slain had sometimes been dumped into these waters.

Evelyne was my age when she started therapy, and started to reclaim her identity as a Jew.

I put off transcribing that conversation for several weeks.

I am 39 years old -- close to the same age Evelyne was when she reached a breaking point, realizing she couldn't move forward while continuing to deny her past. She was my age when she started therapy, and started to reclaim her identity as a Jew.

I'm in the process of converting to Judaism myself.

My grandmother's grandmother was Jewish, though she married a Huguenot, and we've been WASPs ever since. Generations earlier, her family -- Baruch Judah and his brothers -- came out of Poland in the early 1700s.

Poland. Home to extermination camps Auschwitz, Treblinka, Belzec, Majdanek, Sobibor and Chelmno. How many Jews were left in Poland in 1945? Are there any descendants of Judah Leib, Baruch's father, still there? Only tens of thousands survived out of the 3.5 million Jews in pre-war Poland. Distant though the relation might be, there's no doubt I lost family in the Shoah.

But it wasn't my mother or my father. It wasn't my uncle, or my aunt or my grandparents. It wasn't my neighbors or my friends from school. The Holocaust isn't part of my immediate identity. I can put the whole thing aside, forget about it, watch TV, go to the gym, have dinner with friends. But I've been haunted by shades of the Shoah since childhood. I don't know why I've always taken this genocide so personally. Is it my inherent Jewishness, or just my humanity?

I kept working on the article; I wanted to do justice to this amazing woman and her story, but I also wanted to get through it and move on to something else.

Several times each day I had to put my notes aside, rest my head in my hands and cry.

It's one thing to read Anne Frank's diary when you're a kid, and to come across horrific photos in coffee table books about the "final solution." Even the moving images of Holocaust documentaries and movies like "Schindler's List" and "The Pianist" offer a safe boundary of detachment.

Nothing could have prepared me for talking one-on-one with someone who had experienced the Holocaust first-hand. True, Evelyne had escaped the ghettos and the camps. Just a small child at the beginning of the war, she was moved from house to house to keep her safe, while her family members were arrested and deported to Auschwitz. She didn't see those atrocities with her little girl eyes, but she has lived the aftermath every day since.

I thought I had problems? Try growing up as a Jewish orphan in post-World War II Europe.

But Evelyne has been successful in her quest. After years of searching, she has found cousins. She has family again. And she's using her newly acquired genealogical research skills to help other Hidden Children find their lost family members.

Each year there are fewer Holocaust survivors left to tell their stories. The admonition to "Never forget" has never been more important.

At the end of our conversation, Evelyne tried to comfort me, a stranger thousands of miles away. She'd heard in my voice the anguish I'd tried to hide.

It's now 70 years since the Nazi attempt to exterminate the Jews in Europe. Each year there are fewer Holocaust survivors left to tell their stories. The admonition to "Never forget" has never been more important.

I had been second-guessing my decision to convert to Judaism, and interviewing Evelyne has given me some much-needed perspective. As a Jew-in-the-making, I am heartened and intimidated by my obligation to those who were lost. Out of 6.7 billion people on the planet, there are today about 13 million Jews -- many fewer than the estimated 18 million before World War II. Every Jew really does count. So as I meet with my rabbi and push forward with my conversion, I will step for the first time into the mikvah waters not only for myself, but for my ancestors -- and for Evelyne.

Jennifer Willis is a freelance writer specializing in topics related to sustainability, spirituality, health and history. Jennifer has an A.B. in religion from Duke University and is in the process of converting to Judaism. She lives in Portland, Oregon.

Forgiving the Kapo
Olivia Newton John’s Grandfather was a Nobel-Prize Winning Jewish Physicist
Don’t Believe in Other Gods Versus God is One
Seeing Without Eyes
Comments
MOST POPULAR IN Israel
Our privacy policy
Aish.com Is Looking for Great Writers