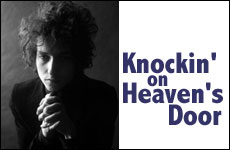 My travels with Bob Dylan

When I was transitioning from childhood to adulthood in the late Sixties, Bob Dylan's songs were a lifeline. So much of my time was spent living in the box. I ate, breathed, and slept S.A.T. scores and college applications. I lived in a highly competitive world where I was expected to accomplish great things. And there were those Bob Dylan lyrics talking about the coming times when "the last would be first," about white doves that sleep in the sand, about a Tambourine Man and other things that resonated with a place in me I was beginning to locate -- called my "inner world."

There weren't too many people who seemed to care about the existence of an inner world, but I didn't give up trying to find them. In my sophomore year of college, I noticed a lot about the inner world in the poems of the French Symbolists, especially in Rimbaud who also happened to be one of Dylan's favorites.

After graduating from college, I worked at a good job in television for two years. Then suddenly, I dropped out and moved to Maine. A number of factors contributed to my unorthodox decision: my father's death, a love of nature, attraction to solitude, and burning questions about life that were not getting answered. I had always been afraid of really blowin' in the wind, but now I felt the need to untether myself.

Dylan seemed to operate from the inside out, instead of the outside in.

Like his Sixties' songs, the Dylan songs of the early Seventies were good company next to my wood burning stove on a Maine winter's night. They spoke about keeping to your true North and what happens when you don't, aligning with your vision and your dreams, and about being real with yourself and your feelings. I wasn't always enthralled with those songs, especially when he sang about women. Certain songs even made me angry. I was no card-carrying Dylan fan.

So how did he help to get me here, living a religious life in Jerusalem, the last place I would have ever imagined myself being?

Dylan seemed to operate from the inside out, instead of the outside in. He had an artistic integrity that made him follow his inspiration wherever it took him. It didn't mean that he never admitted to getting confused, which he did quite often in his lyrics. But he saw the confusion and the clarity and the hope and the despair as all part of some very big picture, and he accepted it all and tried to squeeze all of it into his songs.

Dylan knew how to go knockin' on Heaven's door, and in general, there was a certain God-consciousness in the underpinnings of his songs that were full of Biblical imagery. By the early Eighties, I didn't even notice Dylan's stint with Christianity because I had already made the decision to go for broke in search of my Jewish soul.

It didn't take long for him to drop that Christian phase. There's even a 1983 photo of him at the Wall wearing tefillin. My friend remembers how Dylan drove to Far Rockaway with his limousine and body guards to speak with Rabbi Shlomo Freifeld, obm, and was interested enough to request another meeting.

By then I had more than enough to feed my inner world by singing Shlomo Carlebach songs and traditional zemirot around a Shabbos table in the Old City of Jerusalem.

My first few years of marriage were spent in Denver. During one of our long conversations, Bob Dylan's name came up, and my husband acknowledged that he had also been significantly influenced by Dylan.

My husband had been certain that his rabbi, Rabbi Shloime Twerski, obm, would be one of the few Jewish figures who could speak Dylan's language and open the door for him to Judaism. He was so certain that when he was in California, he went over to Malibu where Dylan lived and tried to find him.

He parked his car down the block and walked over to what he thought was the approximate location of Dylan's house according to the information he had. The house was high up on a bluff, and there was an older woman standing in a flower bed halfway down the hill. He figured it must be Bob Dylan's mother.

"I just wanted Bob Dylan to meet my rabbi. I think it could change his life."

She was wearing a bandanna and pedal pushers. As he approached, she noticed him and the tzitzis and kipah he was wearing. My husband figured it was best to go straight to the point about why he had appeared, unannounced and uninvited.

"I'm looking for Bob Dylan. Is this his house?"

"No, Bob lives up the road. I'm not at liberty to show you where, but why are you looking for him?"

My husband realized he had gone on a wild goose chase. He felt a stab of disappointment and wasn't interested in making conversation, but the lady seemed so nice that he felt she deserved an explanation.

"It's because of my rabbi, Rabbi Shloime Twerski. I just wanted Bob Dylan to meet him. I think it could change his life."

The lady's eyes opened wide when she heard the name "Twerski." Turns out she was Jewish -- the wife of a famous movie producer – grew up in Milwaukee, and knew the rabbi's father.

She shook her head as if the words couldn't do justice to her memories.

"Young man," she said, "I really want to help. You know what -- here take this piece of paper and write down a message for Bob, and I'll see to it that he gets it."

That was as close as my husband ever got to Dylan. Nine months after we were married the rabbi passed away. It would have to take someone or something else to wake Dylan up to his Jewish soul.

LISTEN TO THE MUSIC

Dylan's songs, a kaleidoscope of observations and impressions about life, showed me how the world around me was communicating and I should listen to her music.

For example, this morning while walking to the corner store, I saw a Burial Society van pull up to the sidewalk and pick up a group of little girls with their schoolbags. How incongruous -- even bizarre – I thought, that the same van would be used to transport the dead.

Then the words "Chevra Kadisha," whose literal translation is "Holy Brotherhood," emblazoned in white letters on the dark van, started to unhinge from their usual association with the Burial Society. I realized that the band of little girls climbing in were another type of chevra kadisha, a sweet holy sisterhood of innocent souls on their way to school.

No earthshaking epiphany, but it was a sign that my heart was awake. Like Dylan, I was trying to listen to the precious music.

Bob, wherever you are, thanks for the lifeline, and for being part of the Master Composer's great orchestration.

Varda Branfman is the author of I REMEMBERED IN THE NIGHT YOUR NAME from Carobspring Press. She runs virtual writing retreats and often writes about her lifelong interest in using writing for healing on her blog www.writingforhealing.blogspot.com.

My 11 Months of Kaddish

Walking To Shul With My Dad

What's A Nice Cosmo Girl Like You Doing With An Orthodox Husband?
Morality and Abortion: Three Views
There Are No Limits
Adam and Eve Were Vegan
Comments