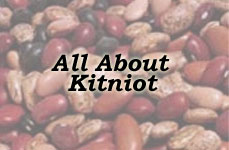 Everybody knows you can't eat bread during Passover. But what's the deal with not eating rice and beans, too?

The Torah instructs a Jew not to eat (or even possess) chametz during all seven days of Passover (Exodus 13:3).

"Chametz" is defined as any of the five grains – wheat, spelt, barley, oats, and rye – which has come into contact with water for more than 18 minutes. This is a serious Torah prohibition, and for that reason we take extra protective measures on Passover to prevent any mistakes.

Which brings us to the category of prohibited Passover food called "kitniyot." Sometimes referred to generically as "legumes," this includes rice, corn, soy beans, string beans, peas, lentils, mustard, sesame seeds and poppy seeds. Even though kitniyot cannot technically become chametz, Ashkenazi Jews do not eat them on Passover. Why?

The Smak (Rabbi Yitzchak of Korbol) explains that products of kitniyot appear like chametz products. For example, it can be hard to distinguish between rice flour (kitniyot) and wheat flour (chametz). Therefore, to prevent confusion, all kitniyot was prohibited.

The Beit Yosef (Rabbi Yosef Karo, 16th century, Israel) notes that since regular grains may become mixed together with kitniyot (apparently due to changes in crop cycles), one may inadvertently come to eat actual chametz.

In Jewish law, there is one important distinction between chametz and kitniyot. During Passover, it is forbidden to even have chametz in one's possession (hence the custom of "selling chametz"). On the other hand, it is permitted to own kitniyot during Passover and even to use it – not for eating – but for things like baby powder which contains cornstarch. Similarly, someone who is sick is allowed to take medicine containing kitniyot.

Interestingly, the Sefardi Jewish community never adopted the prohibition against kitniyot. This creates the strange situation, for example, where a Sefardi family could be eating rice on Passover – whereas their Ashkenazi neighbors will not!

What about derivatives of kitniyot – e.g. corn oil, peanut oil, etc? This is a difference of opinion. Many will use kitniyot-based oils on Passover, while others are strict to only use olive or walnut oil.

There is one product called "quinoa" (pronounced "kin-O-ah," or keen-WA) that is the subject of much discussion. Although quinoa resembles a grain, it is technically in the "goose foot" family, which includes sugar beets and beet root. As such, some rabbis (for example, OU and Star-K in the U.S.) permit its use even for Ashkenazim on Passover, while other rabbis do not.

Some things like chestnuts and alfalfa sprouts were not included in the original prohibition of kitniyot.

Selected Guidelines for The Seder
Why Are The Prayers Of Yom Kipur So Repetetive?
Ha'azinu 5783: A Time for Unity!
Twisted Thinking
Comments