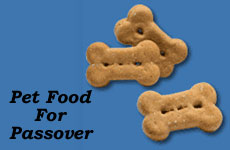 If Fido is hungry on Passover, here's what you can ― and can't ― feed your family pet.

Jews around the world are perplexed by what to feed the family pet during Passover. The Talmud states that not only is it forbidden for a Jew to eat chametz on Passover, but it is also forbidden to own chametz or to have any benefit from it.

Additionally, it is forbidden to have a non-Jew give your pet chametz since we are not to derive any benefit from chametz on Passover – and feeding your pet is regarded as "deriving benefit."

Yet... if the dog is not properly fed, he will chew the furniture instead! What to do?

Also, it is permitted to feed pets kitniyot – rice, corn, soy beans, etc. – which Ashkenazi Jews do not eat on Passover.

If this becomes unusually difficult, there is a leniency to buy regular pet food. However this is providing that the food was not edible at all for humans before Passover, and cannot have possibly caused other food to become chametz. (sources: Biur Halacha – 442:9 "Ad"; Chazon Ish OC 116:8 – "V'Chol")

Even aquarium foods must not contain chametz. Most flake or pellet fish foods contain wheat products. This includes the most popular name brands such as Wardley's and Tetra-min. Alternative foods for your fish on Passover are the various freeze-dried worms, live foods, or frozen foods. (Freeze-dried blood worms are commonly available – the icky name is only because of the red color.) Be sure to check the labels of any commercial foods.

The Search for Chametz
The 21st President of the United States: Failure or Inspiration?
Hiding Their Jewishness
The Jewish Pope: Following the Questions Home
Comments