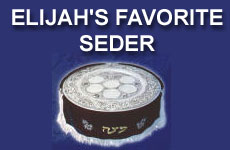 A great Rabbi finds out that Elijah liked best the simple Seder of a poor man who captured the meaning of Pesach in one heartfelt prayer.

Rabbi Levi Yitzhak of Berditchev, one of the great Hassidic teachers, looked forward to Seder night every year.

One year, after the Seder was over, Rabbi Levi Yitzhak went to sleep, content. He had conducted a great Seder with all his students round the table.

He fell into a deep sleep and dreamt a strange dream.

In the dream, the prophet Elijah is talking with the angels, giving them an account of the Seder he saw in Jewish homes. He describes the kids' excitement as their eyes are glued to the cup for Elijah to see if he came to visit them this year.

One of the angels asks, "But which was the most important Seder that you visited? Was it Rabbi Levi Yitzhak's?"

"Truth be told," Elijah answers, "Rabbi Levi Yitzhak's Seder was full of interesting discussions on the Haggadah, but it cannot be compared to the Seder of Chaim the water carrier."

At that Rabbi Levi Yitzhak woke up with a start and jumped out of bed. He had to speak to this water carrier named Chaim right away.

He shook awake one of his students who had fallen asleep at the table and sent him to seek out Chaim.

Eventually, the student found Chaim in a tumbledown hut at the edge of the town and brought him, dazed and barely awake, to Rabbi Levi Yitzhak's house.

Rabbi Levi Yitzhak welcomed the puzzled man, and offered him a chair opposite him. Then he asked, "Tell me, my good Chaim, what happened last night at your Seder?"

Ashamed, looking down at his shabby shoes, Chaim answered:

"What kind of a Seder could an ignorant, tired fellow like me have? Yesterday, the day before Passover was a very hard day. All the houses were being cleaned, and water was in great demand. I walked backwards and forwards all day, trying to supply everyone with enough water. I slaved away with not a moment's rest.

"At the end of the day, I arrived home, half dead from exhaustion. My wife Rachel was just lighting the candles for the festival and I asked her to let me rest a while, and I fell into a deep sleep. When I awoke it was nearly dawn.

"Of course, I quickly woke up Rachel. There was no time now to read the whole Haggadah, so we drank the four cups of wine, and ate the matzah and some maror, and with whatever time I had left, I pleaded with God: 'Almighty, please forgive a simple ignorant man. All I know is that you delivered us in the past from the cruel hands of the Egyptians -- you have led us out of slavery to freedom. And now we are all in exile again, and I ask you with all my heart to lead us again into freedom!"

Having finished his story of woe, the water carrier waited, sure that the great Rabbi Levi Yitzhak would reprimand him for not making a proper Seder.

But instead, Rabbi Levi Yitzchok put his hand on Chaim's shoulder and turned to his students and said, "It is extremely important to follow the order of the Seder, but now we know why this man's Seder was the most pleasing to Elijah the Prophet."

Judaism teaches that "Every individual has to see himself as though he himself was redeemed from Egypt." Telling over the story of going out of Egypt is not enough -- we have to connect with it ourselves.

Chaim, a simple ignorant Jew, in his one sentence Seder, found favor in God's eyes, because of the depth of his sincerity and his commitment to do the best that he knew. "What comes out of the heart, goes into the heart."

Chaim asked from a really sincere and honest place for God to give him freedom and did the best that he could. He honestly felt a personal going out of Egypt.

Our intentions are very important when we do a mitzvah. Only God can know what is in our hearts.

Even the wisest of men can learn from a simple person. In Ethics of the Fathers, the Sages teach: "Who is a wise man? Someone who learns from every person."

The Sweetest Matzah Ever

Passover Crafts
It Takes A Lot Of Faith To Be An Atheist
How Instagram Brought Back This Nostalgic Soup
What Makes Eli Run?
Comments
MOST POPULAR IN Passover
Our privacy policy