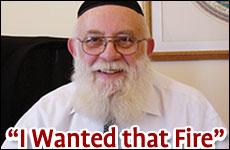 Rav Noach himself was the living embodiment of the fire of Torah.

In 1982, a young woman in St. Louis met an Orthodox Jew for the first time. His name was Rabbi Noach Weinberg. As she recalls that first meeting: "He had this fire of excitement about him. I wanted that fire."

The last time I saw Rav Noach, z"l, was on December 29, 2008, at the annual Aish HaTorah dinner in Jerusalem. The Rosh Yeshiva, having fallen and broken his shoulder and thigh bone, was in the hospital. No one was sure if he would make it to this event in his honor. Then the MC announced Rav Noach's entrance. He was rolled in a wheelchair, his shrunken frame and his short, wispy beard barely recognizable to all of us. The several hundred people present rose and started to applaud. The applause went on for a long, long time, as I stood there, clapping and crying.

I was not crying because of his illness and pain. I was crying because of the sheer greatness of the presence emanating from that wheelchair. It filled the hall like a palpable entity. It was like the time I was flying from Calcutta to Darjeeling. I intermittently peered out the plane's window at the foothills of the Himalayas below me. At one point when I again looked out the window, I was shocked to see a white giant of a mountain almost as high as the plane itself, completely filling the view, totally out of proportion to the rest of the mountain range -- gigantic, majestic, awesome. It was Mt. Everest.

Rav Noach Weinberg, even in his diminished physical state, was an Everest of a human being. When a microphone was placed in front of his wheelchair and he started to speak, the passion in his voice was unabated. And the fire in his eyes blazed like always. My heart was kindled by the fire of his enthusiasm to go out there and change the world.

Rav Noach's greatness was out of proportion to the rest of our generation.

In the immensity of his vision, in the magnitude of his impact on the Jewish world, Rav Noach was totally out of proportion to the rest of our generation, dwarfing us like Mt. Everest dwarfs the rest of the Himalayas. If he were editing this piece, he would no doubt have struck out that last sentence. At his funeral one of his sons, in the midst of his eulogy, declared: "What would he say about these eulogies? He would say, 'Why are you eulogizing me? Every one of you can be greater than I was.'"

An Aish rabbi who visited Rav Noach some 30 hours before he died told me that the Rosh Yeshivah was, until the end, giving directions for how to deal with issues vital to the Jewish people. Eager to hear the great man's last words, I asked, "What else did he say?"

"He said that we aren't doing enough."

Certainly he felt about himself that his every-minute-packed schedule and his 50 years of unremitting toil and effort on behalf of the Jewish People were "not enough," not enough to stem the tide of assimilation, not enough to reverse the trend of intermarriage, not enough to introduce every Jew to the beauty of Torah.

Aish HaTorah means "the fire of Torah." Rav Noach himself was the living embodiment of that fire, filled with passion to ignite every Jewish soul, burning with zeal to kindle the love of God in every Jewish heart. A fire, by its nature, never rests.

When God first charged Moses with the mission to redeem the Jewish People, He spoke to him from the midst of a burning bush. The Torah tells us that the "bush burned with fire but was not consumed." The physical frame that was Rav Noach Weinberg has been consumed. Whether the fire will continue to burn is up to each of us.

Naming our Synagogue for Rabbi Weinberg
Faith: the Axis Upon Which the Wheel of Science Turns
Love - Not Just About Chemicals Anymore!
Is There a Moral Code in a Virtual World?
Comments
MOST POPULAR IN Rabbi Noah
Our privacy policy