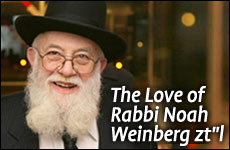 Rav Naoch had the greatest ability to relate to every Jew, because he loved every Jew.

I'll never forget my first days in Rabbi Noah Weinberg's zt"l 48 Ways to Wisdom class in June, 1974. Reb Noah was speaking from his heart and living what he was saying. I wanted to forge a relationship with this great man.

I never stopped marveling at his multi-faceted personality. Every time I would meet with Rabbi Weinberg, I saw more depth to his holy soul. He would teach me so many new ideas. He was like a young man, creating new models and analogies to explain the deepest of thoughts, but only after he had put them into practice.

About a month ago, at the bris of his new grandson, I asked him for a blessing. He told me in four words everything I needed to know to carry on in my work raising the needed funds for Aish HaTorah. He blessed me that I should be able to "do everything without chesbonot/calculations".

These few words spoke to me since Rabbi Weinberg knew me inside and out. Fundraising is a challenge; one can easily tell himself, 'I won't do this or that, there's no point going here or there since it probably won't work.' But all these calculations are a big waste; it's all in God's hands. 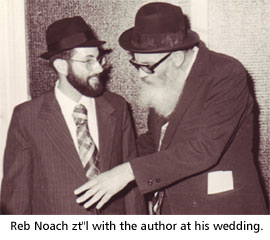 Observing our Rosh Yeshiva was invigorating. His ability to see the big picture, keep his eye on the ball, and then deal with small details in the life of a fellow Jew was extraordinary. Even during this past year while he was ill, Rabbi Weinberg asked me to try to find a free lawyer for an old student of his who had told Rabbi Weinberg of his problems. About 10 days before he died and he was in a lot of pain, he asked me, "How are your parents?" as he often did, even though they met only once 30 years ago. Then he told me I should ask my father if he wants to learn with me on the phone. My father was delighted to start learning with me.

Rabbi Weinberg had the greatest ability to relate to every Jew and explain what life is all about, in the most eloquent language his listener could hear.

I always wondered how Rabbi Weinberg gives some of his famous classes such as Five Levels of Pleasure so many times to so many people, and yet each time it was for me to listen to, entertaining, educational and inspirational.

When a gourmet chef prepares a meal, sometimes many times a day, each time it is a creation. How is that possible? He does it because he is concerned that the people should enjoy and savor his food. From Rabbi Weinberg's love for everyone, he prepared his words each time anew, each class was a new dish, even the ones created from an old recipe. He wanted his listeners to enjoy and digest well all he had to share with them.

"Words that come from the heart enter the heart." This was Rabbi Weinberg. One may call it charisma, but it came from his love of the Jewish people as a whole, and each one of us individually.

But what does it mean to love the Jewish people? Isn't this too big for one to get his hands around? We all have varying levels of this ability, but Rabbi Weinberg through his bond to the Almighty, felt most deeply for the entire Jewish people. Everyone who ever met Rabbi Weinberg felt his love for them.

It was because he loved each Jew and wanted them to reach their own potential that Rabbi Weinberg was able to create such a trail-blazing international network for Jewish education. He gave all his students as much responsibility as they could handle, and then added on more when he saw they were able to still work with what they had. He wanted his students to surpass him. He told us years ago that by our uniting, we, his students, will be able to accomplish more than while he is alive.

Rabbi Nevenzal, the Rabbi of the Old City, in his eulogy at the funeral said that the further merit we give Rabbi Weinberg now in the world of Truth is to continue Aish HaTorah as he had put it into motion. Today's financial crisis makes the stakes even higher. All who want to give back to Rabbi Weinberg can do so by helping to make sure that Aish HaTorah not only continues, but also grows and flourishes to give more and more sustenance to the Jewish people and to bring the world back to a full recognition of their Creator.

Gavriel Kleinerman is originally from Long Island, NY. After earning a degree in Metallurical and Materials Engineering from the Univ. of Pittsburgh, he worked at MIT as a project engineer in bio-engineering. In 1974, Gavriel took off what he thought would be one year to study in Jerusalem with Rabbi Noah Weinberg zt"l. Today he is the Executive Vice-President of Aish Jerusalem. He and his wife have three married children and more than a minyan of grandchildren.