The Greatness of Rabbi Weinberg, zt"l 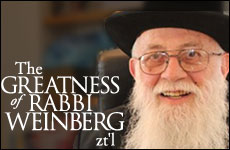 The day after my beloved rebbe, Rabbi Noach Weinberg, the founder and Rosh Yeshiva of Aish HaTorah, was diagnosed with a very aggressive, lethal form of lung cancer, we were meeting in his office. He stood up, and after pausing for a few moments, turned to me and said, "I am just not ready to quit fighting for Klal Yisrael. If the Almighty calls me home, I am personally ready to go, but I just don't see anyone else that is going to step into the fray and fight the fight that needs to be fought." 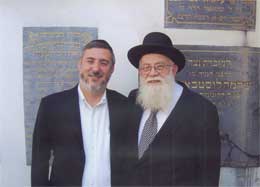 This conversation encapsulates what drove the Rosh Yeshiva zt"l. It was never about him ― at all. Rav Noach's only desire was what was best for Klal Yisrael. With every fiber of his being, he wanted to fight, work, create and find ways to empower the Jewish People to accomplish its purpose of being a Light unto the Nations.

During the 14 months that the Rosh Yeshiva was sick, he suffered from many painful, even debilitating, ailments that were brought on by the cancer and the various treatments he underwent. At times, he was in excruciating physical pain. For several months he was unable to lie down because of terrible back pain, and was forced to sleep sitting up in a chair. Although these pains were physically devastating, to him they were trivial compared to the pain of being unable to actively lead Aish HaTorah in its fight against assimilation and the physical threats facing Klal Yisrael.

According to the calendar, he died one week before his 79th birthday. But all who knew him know he died a very young and vigorous man. He had accomplished so much. His brother Rav Yaakov Weinberg zt"l, the Rosh Yeshiva of Ner Yisroel, once said that his brother Rav Noach had done more for the Jewish people than anyone else in this generation. He built an international organization that touches the lives of one million people a year. Tens of thousands of people are today Torah observant because of his ground-breaking efforts, but if you met him, you could make the mistake of thinking he was just starting out. He was so hungry, so passionate, so frustrated not being able to do more. You never would have believed that this was a man who had so many accomplishments to his credit.

Since the world was not yet perfected, we could not rest.

Many men half his age could not keep up with him. There were many times that I would tell him, "I have to leave the office now because I am so completely overwhelmed with the responsibilities and the plans that you want to implement."

His fire did not come from the desire to accomplish great things. If that were the case, he could have become complacent long ago. What drove him was the desire to fulfill the Almighty's will, which meant Tikkun Olam, repairing the world. Since the world was not yet perfected, we could not rest. There was still plenty of work that needed to be done to accomplish our goal.

During the planning for Aish HaTorah's Partners Conference this past December, the Rosh Yeshiva insisted that the conference articulate two very basic but profound concepts. The first was, 'If you take real responsibility to do the will of God, you will succeed.' And the second was, 'If you really care, then you will take responsibility.' This was the engine that drove the Rosh Yeshiva, and this is why he wanted these concepts clearly expressed at the last conference. This was the Rosh Yeshiva; he took responsiblity and did so because to him every Jew was family.

I believe the Rosh Yeshiva's role model was Sara Schneirer, the woman who founded the Bais Yaakov school system for girls. He loved to tell over the story about Rav Chatzkel Sarna, the former Rosh Yeshiva of Chevron, who while speaking at a bris attended by many Roshei Yeshivas and leading rabbis, challenged them saying, "I know each one of you here thinks that it was either their father or their grandfather who did the most for Klal Yisrael in the last 100 years. But I am here to tell you that that all of you are wrong. Not only that, but the person who did the most for Klal Yisrael was an uneducated Jew who could not even learn a page of Talmud. And furthermore, when I tell you the person's name, you will all agree with me. That person is Sara Schneirer."

The Rosh Yeshiva would explain, what drove her? What enabled her to merit making such a far reaching transformation in Klal Yisrael that even the leading rabbis of that time did not initiate? The Rosh Yeshiva would explain that in Sara Schneirer's diary, she told over her secret. She was a seamstress, and young Jewish girls from observant homes would come to her to have their clothing made. She would talk to them and see up close how far away they really were from Torah and mitzvot, and she would cry for them saying, "Although I clothe their bodies, what will be with them if they have no mitzvot to clothes their souls?"

Undertake the responsibility and the Almighty will give you the heavenly assistance to accomplish it.

The Rosh Yeshiva would then tell everyone and anyone who would listen that this is the ultimate key. If you want something bad enough, so badly that you are willing to cry for it, then you will undertake the responsibility, and the Almighty will give you the heavenly assistance to accomplish it.

The Rosh Yeshiva, more than anything else, stressed the importance of taking responsibility. I once showed him something from Rav Chaim Shmulevitz zt"l Sichos Mussar that gave him an enormous amount of pleasure. In his essay on responsibility, Rav Shmulevitz says that responsibility is the measure of a person. Therefore a king has the highest standing amongst the Jewish people because he is taking the most responsibility for Klal Yisrael.

But this level of responsibility is not limited to those who are formally appointed king. Rav Shmulevitz asked, how is it possible for Esther to tell Mordechai, the leading rabbi of his generation, to organize a fast on Passover? If it was the right thing to do, then why didn't Mordechai initiate it himself? And if it was the wrong thing to do, why did he listen to her? Rav Shmulevitz explains that the sentence in the Book of Esther says that "Esther wore the raiment of a queen." This does not refer to just her clothing, but to her character as well. Since she was now taking complete responsibility for the well being of the Jewish people, she attained the status of a queen, and therefore it was fitting for her to initiate the fast and instruct Mordechai to implement it.

The Rosh Yeshiva took responsibility for the entire Jewish people. This was his true greatness.

In addition to the Rosh Yeshiva's concern for Klal Yisrael and sense of responsibility was his Torah genius. He had the gift of being able to take the timeless principles of Torah, distill them to their essence, and then develop unbelievably creative ways of explaining and illustrating these concepts to the most uninitiated Jews, in a way that would show them the profound depth and relevance of traditional Torah and Judaism. He wrote curriculums that accomplished this purpose. The 48 Ways to Wisdom, based on the mishna in the 6th perek of Pirkei Avos, The Five Levels of Pleasure, based on the first paragraph of the Shema, The Six Constant Mitzvot, his Foundations Materials that present a comprehensive overview of Jewish philosophy and thought – they were all incredibly original in their presentation, but completely anchored to the chain of tradition.

His greatest gift was giving us the privilege of being able to join him in making a difference for our people.

I believe his greatest accomplishment was his belief in the powers of an individual. He took the mishna in Pirke Avos at face value that said, "Cherished is man for he is created in the image of God." Who else could take a group of completely disenfranchised young Jewish men, most of whom could not read aleph beis, and many of them quite antagonistic to religion and Judaism in particular, and see within these young men the members of an organization he wanted to create? Many religious Jews would cross the street if they saw these fellows walking down their block. The Rosh Yeshiva was undaunted by their physical appearance. Not only did he see their souls and their thirsting for Torah Judaism, but he believed in them. He believed in their sense of idealism, and that they, together with him, could change the world.

To all of us who are involved with Aish HaTorah, that was his greatest gift ― to give us the privilege of being able to join him in making a difference for our people.

This is his lasting legacy, and I am 100% convinced that the message he wants us to learn from his passing is that we all have a responsibility to fight for the Jewish people, and that all of us, with God's help, can make that difference.

His loss is devastating. Rav Noach was one-of-a-kind and is completely irreplaceable. The only way to translate this into something positive is if each of us hears this message. He told me many times that he hoped his passing would enable us to hear this message in a way that we were unable to while he was alive. If we do, this will be the greatest gift that we can give to him.

Originally from Toronto, Eric received rabbinic ordination from Aish HaTorah and the Chief Rabbi of Jerusalem. From 1996 to 2014 he served as CEO, working closely with Rabbi Noah Weinberg zt"l to develop strategy and manpower for Aish International and the Jerusalem Yeshiva. He was formerly the North American director of the Discovery Seminars, and compiled Aish's kiruv primer, The Eye of a Needle.

Summary of Eulogies in English - text
Is Grease the Word?
Dried Fruit Compote
Scientific Curiosity and the Divine Encounter
Comments
MOST POPULAR IN Rabbi Noah
Our privacy policy
Aish.com Is Looking for Great Writers