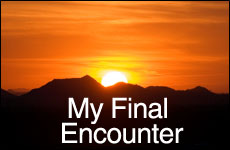 What I learned during my last 10 minutes with Rabbi Weinberg.

When Rabbi Weinberg first became ill, my wife asked me, "If you had 10 minutes with the Rosh Yeshiva, what would you ask him?" For days I didn't even want to think about the question. Who could imagine, God forbid, only having 10 minutes. Rabbi Weinberg was always there for us.

A few months later I had, unexpectedly, what would be my last private time with him. It was at the cafeteria at Shaarei Tzedek hospital in Jerusalem. The disease was progressing and treatments were taking their physical toll. If his son Yehuda hadn't called me over, I might have walked by without even recognizing my beloved Rosh Yeshiva.

I had my 10 minutes. I started by telling him what my wife had asked me. Having been part of Aish HaTorah for more than 12 years, his core ideas and teachings were well known to me, so I asked not for new insights, but rather ideas on how to internalize and actualize all he has taught me over these years. I realized that I fall so short of living to his expectations of greatness, it is frightening.

He told me that one of the main reasons we don't reach our potential is impatience. We try waking up and saying to ourselves, "What am I living for?" But if we don't see changes after a few days, we tell ourselves "This doesn't work," and give up.

Persistence is the key. Don't give up if we don't see changes immediately.

His advice: Wake up everyday and ask, "What am I living for?" and "How am I going to get there?" Persistence is the key. Don't give up if we don't see changes immediately.

His own life attested to this. Aish HaTorah was not the first organization Rabbi Weinberg founded in order to battle apathy and assimilation among the Jewish people. He started many. And most of them failed. He often spoke – joyfully, no less -- of his failed attempts. Relating back, this surely was one of his ways of encouraging his students and supporters to keep moving forward although "success" may seem hidden.

The second thing I did was ask the Rosh Yeshiva to remind me of a tool he often recommended we do. One of the most basic, yet most empowering ideas that I learned from Rabbi Weinberg is that we are God's children. He is the ultimate Father in heaven, and treats us as such. Rabbi Weinberg suggested we sit on the floor five minutes a night and try to feel the pain the Almighty must feel knowing His children are so far from Him. Through this process we'll become open to new ideas on how to awaken the Jewish people to their mission.

Rav Noah was nearly in tears as he spoke about God's children drifting away. For him it was real. He felt it. He knew it. He lived it.

On the way home, I realized he hadn't reached that point because he tried a few times and gave up. His advice for persistency came from his experience.

May we all use this incredibly difficult time of loss to redouble our efforts in learning, integrating and activating the life teachings and yearnings of our great teacher and leader Rabbi Yisrael Noach ben Yitzchak Mattisyahu.

Jack  is currently Executive Director of Aish.com. He holds a degree in Industrial Engineering from the University of Pittsburgh, where he played varsity tennis. He has worked variously for the U.S. Air Force and in casino management in Nevada. He received rabbinic ordination in Jerusalem and currently lives in Ramat Beit Shemesh with his wife and children. Rabbi Kalla''s responsibilities at Aish.com include fundraising and marketing.