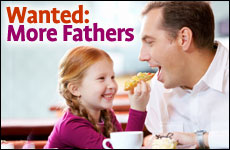 Where have all the fathers gone?

My 19-year-old daughter called me at the office to ask for my advice. I told her I was proud of the way she was handling the situation and offered some guidance on more things she could do. The office was an open concept and I noticed one of the support staff, a 21-year-old woman, was listening. When I was off the telephone, she said I gave my daughter good advice.

I was wondering why she listened in to the suggestions I gave my daughter until she told me that her parents were divorced and from the time she was 11 years old she didn’t have a father. The way she spoke, I could hear the hunger for what she had lost.

“I also lost my father in a divorce,” said another woman who also hadn’t seen her father in years. She used the same language of loss that children use when saying their father has died.

Related Article: A Face in the Window

The lack of dads has become a common experience for many children in the 21st century. In Toronto, the 2006 census showed that 24 per cent of families are headed by one parent – 83 per cent by a woman.

Where have all the fathers gone? Interestingly, while we criticize single fathers who take no interest in their children, divorced men who want to be fathers to their children often have to fight legal battles to see their children and are still often relegated to being visitors in their lives.

In intact families, some fathers believe child-rearing responsibilities are best left to the mother and the father should focus on being a good provider. Other fathers want to be involved and become their wives’ biggest helpers. They change diapers, give the kids baths and feed infants. It’s good to do this work – but what does a father, as a man, give to children that a mother as a woman can’t? There are many things women give to children that men can’t, but what can only a father give? When I ask this question to groups of men, they seem puzzled. They say nobody ever asked them this question.

A father shows his children what it means to be man. He provides a strong male role model who is a teacher, leader and guide to his children. To his son, he is an example of how a man interacts with other men and how a man treats women – especially his wife. To a daughter, he is the first man in her life and a role model of what a man should be. He can influence the kind of man she will choose, by being that kind of man and treating his daughter how he wants a future spouse to treat her.

A father’s job is to be aware of what is going on in his family and know when he needs to step forward to help solve situations that need his leadership. A child who grows up without a father or with a father who leaves all leadership to the mother, is deprived of the insights the father gained from his life experience and a role model of a man who is a leader in his home.

We need more fathers to step up to the plate and be the fathers children need. This is not being a father who only wants to be best friends with his children. Your children will have many friends; they will have only one father. And it’s also not a father whose only job is to provide; you may be disappointed when your children only come to you to ask for money.

What children hunger for is a father who is a guide and leader who teaches them about life. Be that father so your children will not hunger for the father they could have had.

Kids with No Patience

Back to School Sanity
Blocked Goals and Anger
Why the Mezuzah is Placed on a Slant
Faith: the Axis Upon Which the Wheel of Science Turns
Comments
MOST POPULAR IN Family
Our privacy policy