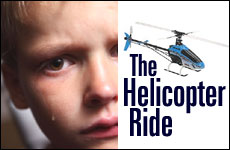 Almost a thousand kids of all ages would be attending our local counter fair. Music, games, a show – and a grand raffle the kids have been taking about for weeks. An 8-year-old boy wakes up early and gets ready to go with his older brothers. Each child gets some money to spend. Most of the siblings plan to buy treats. The 8-year-old wants to buy a raffle ticket. He has his eye on the second prize, a fancy new bike. The third prize sounds good, too – a gift certificate at a local store.

But something inside makes him feel that he will win the first prize – a ride in a helicopter.

As he’s leaving for the fair, the boy asks his mother, "What if I win the helicopter ride?"

"Sorry," she says. "Too dangerous. How old is this pilot? Who is overseeing it? Are they using a cheap, old 'copter that has been relegated to county fairs because it’s from the Korean War? You can't just assume that it’s safe. The risk is not worth the 15 minutes of fun. Sorry, honey. Hopefully, you'll win the bike – but don't count on winning. Do you know what the chances are? Maybe you’d rather use the money to buy something else at the fair ?"

The boy had a strange feeling inside and didn't want to do anything else with the money. Amidst all the bustle and excitement of the fair, he stood with his plan. And incredibly, he won first prize – just as he sensed he would.

But now he didn't know whether to jump for joy or to cry. This helicopter ride will be the most fun thing he'd ever done in his young life… except that Mom said he can’t go.

The tearful 8-year-old gave the ticket to a friend.

Shocked by the incredible events and seeing how much his little brother wanted to go on the ride, the older brothers called home immediately to double-check. But neither their mother nor father could pick up right then. And when Mom called back a minute later, it was too late. The 8-year-old, bawling, had given the ticket to a friend – who went on the ride and had a great time.

"Uh-oh," the father said upon hearing the story. "He is going to be inconsolable. And hate us as the mean parents."

"Do you realize what just happened?" the mother asked. “What an incredible achievement for an 8-year-old boy. He gave up such a huge thing, didn't make excuses or rationalize anything. He listened to his parents. I am so proud of him. Many adults can't do the right thing when offered fun and excitement – and he did it at eight years old. Wow!"

Fast forward 30 minutes. Eight-year-old comes home crying. Father gives him a hug, telling him how difficult that was and how proud he is of his son. Mother gives him tremendous affection and can't stop talking about the boy's amazing accomplishment in the face of a challenging situation. Grandmothers hear the story and call to share their pride.

Mom brings out a beautiful chocolate cake, quickly baked for the occasion. A hero in the family deserves a celebration! With frown turning into a sheepish smile, the boy basks in the attention… and gets a triple-size slice of cake.

Let’s face it: Judaism has a lot of restrictions. Kosher food, no eating on Yom Kippur, no driving on Shabbat. For a kid growing up in our instant-access Western world, it’s a real challenge to balance all the temptations with the self-discipline built into Judaism.

That’s why we, as parents and educators, need to focus on the power of “yes.” Make Judaism positive. Fun. Exciting. Invest in the holidays. Visit Israel. In order to keep the next generation proudly Jewish, we need to reveal what our tradition truly is: an inspiring, fascinating and meaningful identity and way of life.

Of course, in some situations the “don’t” is more appropriate. The mother in the story above (my wife actually) understood a very deep lesson about life and Jewishness and taught it to the boy (my son) in a very beautiful and powerful way. It is a lesson that we usually know, but rarely articulate or put into practice.

Doing the right thing requires sacrifice. As great as life is, you can't always get what you want. As great as Judaism is, it doesn't allow us to do everything we want. We shouldn't claim otherwise.

When our children are faced with the "No's" – the things they cannot do – we need to emphasize the payoff for doing the right thing. The incredible feeling we get, the respect earned from loved ones, and most importantly, the inner strength we build when making the right choices – all these are worth far more than a helicopter ride. And a whopping piece of freshly-baked chocolate cake doesn't hurt, either.

How to Foster Gratitude in Children

Short and Sharp: Raising Kids without Raising Your Voice

Where did grandma go when she died?

8 Nights, 8 Heroes
Jews and the Chocolate Trade
Cats: 8 Jewish Facts
Every Night, Forgive Yourself and Others
Comments
MOST POPULAR IN Family
Our privacy policy
Aish.com Is Looking for Great Writers