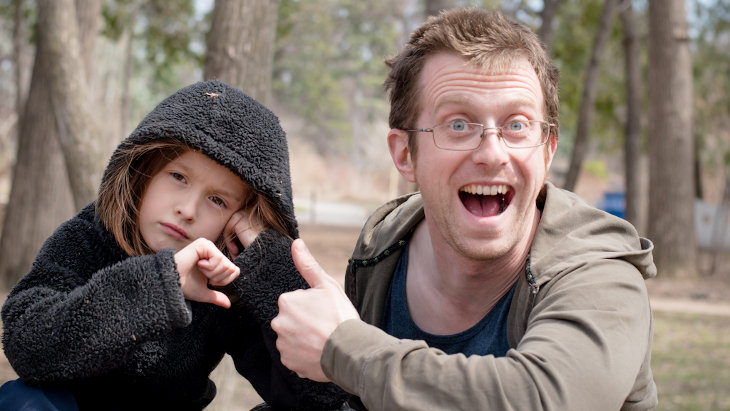 When did the word “dad” become synonymous with out of touch and irrelevant?

“Aww, Dad!” We’ve all heard this whine, usually accompanied with a roll of the eyes. It’s every kid’s put down, a way of subtly implying that dad is out of touch and maybe a little embarrassing.

When my kids were tiny, they thought that Daddy was the greatest person around, but as they got older I noticed a greater willingness to gently poke fun at dad. The word “dad” even started to be used as an adjective meaning silly or irrelevant. A “Dad sweater” meant it was ugly. “Dad jeans” are out of style. A “Dad joke” is one that falls flat. Somehow dads have become synonymous with being out of touch and sort of useless.

One day a friend’s throwaway comment gave me a new way to talk to my kids about their father that encouraged respect, not ridicule.

Our youngest son wanted to take circus lessons but competition to get into the program was fierce. The slots filled up as soon as registration opened. My husband said he’d start phoning as soon as the office opened on sign-up day and try to get him in. It took much of the morning, but in the end he was successful.

My son proudly told this to a family friend in synagogue the next Shabbat and her eyes widened. “Wow, your dad must be really special,” she said in an awestruck voice. I watched as he stood up straighter and grinned. “Lots of dads can’t get their kids into that class!” she exclaimed. “Do you know how wonderful your dad must be?” She was laying it on thick and my son lapped it up. Maybe this girl was onto something.

Later that week I said to one of my kids one night after my husband made his signature shakshuka, “Do you realize what an amazing cook your father is? This is the best shakshuka I’ve tasted!” I sounded kind of strange to my own ears but nobody made fun of my over-the-top words. In fact, the kids actually acknowledged that yes, the shakshuka was pretty exceptional.

I started going out of my way to praise my husband in front of the kids. I pointed out how their father volunteers much of his time to help others, he has a great singing voice and when it comes to homework he’s a whiz about history and science. The more I found ways to praise my husband the fewer snarky comments I heard.

Eventually I found myself speaking that way about other people as well. I told my kids how their grandfather passed the CPA exam on the first try by studying round the clock for weeks. How their great great grandfather once stopped a robbery in the bank he worked in, got shot in the process, and was hailed as a hero. How their grandmother had five children when she was still in her twenties, then went back to college to get her graduate degree.

So many of my kids’ relatives have wonderful accomplishments and qualities; I can’t believe it took me so long to start talking about them and pointing out just how exceptional every member of our family is in their own ways.

I realized that for years I never gave my kids the tools they needed to respect their father. As a parent, it’s part of our job to model for our kids ways we want them to interact with the world. By ignoring all my husband’s accomplishments - by failing to acknowledge all the ways he’s wonderful and unique - I was short changing my kids.

In a world where disrespect is so common – particularly when it comes to dads – there are a few concrete steps we can take to instill some feelings of respect and gratitude in our children, and ourselves.

1. Point out things that your spouse does for you and your children. In Hebrew this is called Hakarat Hatov, or recognizing the good: we each have an obligation to acknowledge what good things other people have done for us.

My husband started a tradition during each Shabbat dinner. Before we sing “A Woman of Valor” at the start of the meal, he asks all our kids to go around and name three nice things that Mommy has done for them that week. It forces our kids to spend a few minutes thinking about all the ways they are cared for and helps shift their mindset to one of gratitude and thanks. This can be a time to brainstorm ways that Dad and other relatives have helped children - or all the ways that family members have helped each other as well.

2. Get in the habit of talking about family members’ history and accomplishments. What makes your spouse and other relatives special? What qualities do they have that are unique and noteworthy? Create a strong family narrative, and help your kids develop a deeper sense of relatives’ histories, qualities, talents and experiences.

The results can be profound. Researchers at Emory University have found that children who know more about their family history tend to be more resilient and have higher levels of self-esteem, do better in school, and have greater feelings of control over their lives. Having a clear sense of where we come from and what experiences our relatives have had gives kids a better sense of how they can navigate the world too.

3. Take a lesson from Jewish texts and give kids a clear set of rules about showing respect to parents and grandparents.Don’t allow kids to call their parents or grandparents by their first names. Always use titles such as Dad or Daddy or Grandpa instead. Don’t interrupt parents or grandparents. Never belittle them. Don’t contradict your parents or grandparents.(If you really feel it’s crucial to say something that directly contradicts what they’ve said, phrase it in a sensitive manner that doesn’t embarrass them.) If a parent has a chair or a seat at the table that’s known to be theirs, don’t allow children to sit in it.

These measures might sound old fashioned, but they draw on millennia of Jewish wisdom and help instill feelings of respect for parents and other relatives.

4. Finally, resist the lure of the “Dad joke”. Putting down Dads might seem amusing in the moment, but it creates a lasting feeling of disrespect. Instead of laughing at dads, try building them up. Set aside time for father-child bonding. Consider taking on a special project that will bring dads and kids together. Instead of relegating Dad to a bit part in our kids’ lives, let’s try putting him center stage and celebrating him instead.

One Drink Too Many: My Journey of Breaking Free from Alcohol
The Scandalous History of the Aleppo Codex
Who was Two-Gun Cohen?
Why Really Everyone Believes in Free Will
Should Jews Support Ukraine?
The Jews of Cuba
Comments
MOST POPULAR IN Parenting
Our privacy policy