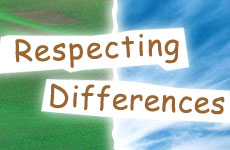 Do you think the opposite gender is a little crazy? Think again. You may be crazy, too.

I divided the 50 young professionals into two groups -- one for women, one for men. I then asked each group to list the following: "What are your strengths and what are your weaknesses." I then had each group answer the same questions about the opposite sex.

After 15 minutes, a spokesperson from each group read their lists. A fascinating thing happened. Many of the strengths that each group claimed, were perceived as weaknesses by the other group!

The strengths that each group claimed, were perceived as weaknesses by the other group!

For example, when the men claimed they were intellectual, logical and level-headed, the women reacted, "That's exactly our problem with you. You're emotionally absent. Have a bit more 'heart.'"

Later, when the spokeswoman stated that a feminine strength was to be in-touch emotionally, the men jumped in, "That's exactly our problem with you. You're too emotional. Lead with your minds, not with your hearts."

Looking back, I now realize that we all think we have a monopoly on how to live correctly. Instead we need to be open-minded to different approaches. Kavod is the Hebrew word for "respect." This comes from the family of words that mean "heavy." I respect the person who is "heavy," who carries weight. A heavy object is something that I've got to deal with. If it's light, I just kick it out of the way.

Respecting a spouse means that I view him or her as being substantial -- their opinion is something I must grapple with. I can't simply dismiss them with a wave of the hand.

Men don't always see things the way they are. Women don't either. Respecting my beloved's differing view gives me the opportunity to explore an alternative path. It might be my "road-less-traveled." It might also be the better way to go.

Is Ghosting Really that Bad?

Dating Someone from Another Country

Can Mr. Divorced be Mr. Right?

Self Love
The Softball Player
How This 6 Generation Bread Baker Brought Back Israel’s Ancient Grains
Olivia Newton John’s Grandfather was a Nobel-Prize Winning Jewish Physicist
Comments
MOST POPULAR IN Dating
Our privacy policy
Aish.com Is Looking for Great Writers