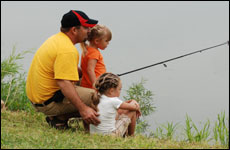 Divorced fathers need to remember that their children need them.

1. Don’t blow up at your kids or they may blow you off.

Do not raise your voice at your children or do anything in anger toward them. If you feel you’re close to getting angry, take a deep breath and remind yourself that blowing up may destroy your relationship with them. Most children of divorce have a choice of where they want to be and they may decide they don’t want to be with someone who yells at them. When you see a man in public blowing up at his children, doesn’t he look like an out-of-control fool?

That doesn’t mean you don’t have a responsibility to teach your children right from wrong. It’s one of your most important jobs. Teach them in a calm voice and they will remember the wisdom you taught them.

2. If you have a new family, make sure your children are part of it.

My daughter’s friend told her about a big fight he had with his mother. My daughter said, “Do what I do. Take a break with your dad.” Her friend said, “I can’t. My dad has a new wife and I don`t feel welcome there.”

If you start a new family or become part of your wife’s family, make sure your new partner wants your children to be part of your life together. As the man in the middle between your new wife and your children, show them that they are all important to you.

Though children may blame feeling unwelcome in their father’s life on the “wicked stepmother” – the stereotype made famous in fairy tales, it’s the father’s responsibility to make sure his children are part of his new family.

3. If you haven’t seen your children in a long time, reach out to them.

A friend who as a child lost her father in a divorce said, “He should have kept fighting for me.” Tragically, too many children lose their fathers during divorce battles. But even after years, they can re-connect.

A woman in her 20’s, told me she hadn’t seen her father in 10 years. He lived in another city and had invited her to visit. She was wondering if she should go. I told her that she could have a lot of boyfriends and even a lot of husbands, but she will only have one father. A few weeks later, she told me she went and was happy to now have a relationship with him.

A man who hadn’t seen his daughter in the 16 years since his divorce told me his ex-wife passed away and he wanted to go to her funeral to try to reconnect with his daughter. I said he should definitely try to reconnect but maybe not at the funeral as it`s hard to know how her family would react to seeing him. Later that day he told me he was going and bringing his sister and brother-in-law to protect him. They went. His ex-wife’s family welcomed him. And his daughter was glad to have her father back in her life—because children need fathers.

Elliott Katz is the author of Being the Strong Man a Woman Wants: Timeless Wisdom on Being a Man which is striking a nerve – it’s being translated into 24 languages by publishers in Europe Asia and Latin America

PODCAST: Wanting My Child to Treat Me Like a Friend

How to Be a Hero to Your Kid
Blocked Goals and Anger
Why the Mezuzah is Placed on a Slant
Faith: the Axis Upon Which the Wheel of Science Turns
Comments
MOST POPULAR IN Family
Our privacy policy