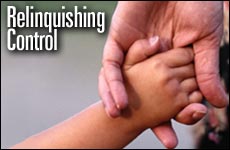 The difficult art of letting go.

One of the greatest pleasures of parenting – and teaching – is watching your "student" grow, mature and even surpass you. As our Sages have taught us, "A person can be jealous of anyone, except for his child or student" (Talmud, Sanhedrin 105b). After all, my child or student is an extension of myself, and his success is therefore mine as well.

Teachers want to see their charges become independent and incorporate what they've learned into their own decision-making. Thus, Moses did not consider himself dead as long as his student, Joshua, lived. (1) I think the reason for this is that when Joshua responded to a question, you could be sure that this would have been Moses' response as well. (2)

Consciously or subconsciously, however, some parents have trouble "letting go." Indeed, parents in their 80s have been known to remind their 60-year-old "children" to dress warmly on a chilly day.

Each of life's stages presents challenges.(3) Yet as the contemporary Jerusalem scholar Rabbi Shlomo Fisher (4) once said, all the mazel tov's of life have one common denominator. When a baby is born, its umbilical cord is useless and, since it must now exert itself to nurse, it now bears some of the responsibility for its own feeding. Mazel tov! Upon reaching maturity, he or she becomes responsible for fulfilling the Torah's commandments. Mazel tov! At marriage, new responsibilities are shouldered. Upon becoming a parent, one becomes even more accountable. Mazel tov, Mazel tov!

The Hebrew word for "responsibility," achrayus, is related to the word acharis, end, for responsibility means being accountable for a situation's ultimate outcome. This demonstrates the relationship between responsibility and authority – one can't be responsible for something he can't control.

Parents must teach children how to make decisions, with an eye to eventually "letting go."

Some parents have difficulty increasing their children's authority over their lives. But it's human nature to want to manage one's own affairs. We never outgrow the need to discern the Torah perspective on a wide variety of issues, but we must also learn to stand on our own two feet. (5)

Children are no exception. They want to be able to make decisions. Parents must teach their children how to make these decisions, with an eye to eventually "letting go." This often means allowing for mistakes, some are trivial, such as broken eggs when children are learning to make their own breakfast. Some may be more serious or costly. But failure is a learning experience, so be prepared for your children's inevitable errors. (6)

There are several understandable reasons why parents find it hard to relinquish control over their children's lives, even gradually.

First of all, most of us want to be needed. However, as wonderful as it is to give to others who really need you, it's another thing altogether to hold on just to be needed. Remember, your life experience is greater than your child's, so if your relationship is healthy and you "let go" wherever he can manage on his own, he will still consult you in other areas. This will certainly occur if you yourself set an example by turning to others when necessary.

Another reason we don't "let go" easily is that we want to shield our children from the painful consequences of wrong decisions. But they must learn that mistakes – and their price – are to be expected; it's part of their preparation for life. Mistakes can have unpleasant consequences, but fear of making mistakes is worse. So equip your children to make reasonable decisions, then reassure them that most blunders are neither irreparable nor tragic.

Some parents fear "losing" their children if they become too independent. Actually, the reverse is true. When you "let go," children consult you more, for they know you won't make the decision for them, or impose your viewpoint. Their turning to you under such circumstances is, in fact, a sign of their growing strength, since they are asking you of their own volition.

A wise Jew once explained to me that his sons-in-law seek his advice because he never volunteers it, even though he is renowned for his sound counsel. He never expresses opinions about their family life. Sometimes they approach him, saying: "Make believe we are strangers. What would you advise us about such and such a problem?" Once, when his newlywed daughter asked him for some advice, he directed her to her husband. This father's "letting go" is a sign of his strength, and it is precisely why his sons-in-law do not view him as a threat to their stature in their own homes.

If parents don't let go, emotionally healthy children will pull away. I advise parents who study with their children to stop five minutes before your child needs to stop. Let him stretch his legs or begin another activity. That way, he'll look forward to his next study session.

To sum up, don't forget that you must prepare your children to live successfully on their own. This involves letting them gradually take more and more control over their own lives. If, both as a part of your child-raising and by personal example, you teach them by example that it's wise to consult others when confronted by thorny problems, then they will have an excellent chance to live properly and successfully. Your good relationship with them will remain intact, since they've learned that consulting others, including parents, makes good sense.

Wait Until They're Ready

The idea that people pass through many stages of life is important to us in understanding yet another potential cause of disciplinary problems. For just as parents must not hold on too long and too tightly to their children, neither must they let go before their youngsters are emotionally or intellectually ready (although relinquishing control too late can be more problematic than doing so too soon). Regarding the danger of imposing more discipline than a child's age warrants, Rabbi Shlomo Wolbe (7) explains:

It should be clear: Any demand that is incongruous with a child's age is liable to wound his tender heart, a wound which can in the future have a worrisome effect on his development and personality. This [effect] can find expression in the form of fears, nervousness, and lack of independence at an age that demands independence. (These words refer even to such simple matters as [an insistence on] cleanliness, sitting in an orderly fashion around the table, etc., as mothers customarily demand of their children several years before the appropriate time.)"

In short, you must know when and when not to insist on certain behavior.

Many parents rightly impose a curfew on their children. However, your child may resent your insistence on matters considered "babyish" by environmental or social standards. For example, his friends may not have curfews. So if you want your child to adhere to your values rather than those around him, take time early to establish a special relationship with him – or don't raise him where you're raising him.

Likewise, your child may correctly feel that the time has arrived for him to make judgments on matters that were previously a parental prerogative, bedtime, eating habits, etc. Your insistence on maintaining complete control over such questions can cause recurrent, bitter conflict.

You must prepare yourself and your child for the time when you're going to be "letting go." This transfer in decision-making should be made before your child demands it; this way, he won't consider it a sign of weakness to ask your advice afterwards, since you're the one who gave him the reins.

It follows, therefore, that if you constantly find yourself battling with him over the same matter over a long period of time, then it may be a sign that your child is either not yet ready to shoulder certain responsibilities or is already past the stage when such control is appropriate. So take a careful look at your child before making demands of him. Is he developmentally ready? Can he comprehend what you want? Are your expectations premature?

If you're not sure, let go. Forgo the discipline.

Part of parental responsibility is to help children become capable of functioning independently.

Be their role-model for seeking advice. Your children are likely to emulate you.

Make sure you transfer responsibility to your child at his proper developmental stage.

Reprinted with permission from "My Child, My Disciple." Feldheim Publishers - www.feldheim.com

(1) See Rashi on Deut. 31:29.
(2) I once heard from HaGaon Rav Chaim Shmuelevitz, zt"l, that he only derived pleasure from this world twice. First, he made a statement and was told that Rav Yeruchem Levovitz, zt"l, had said the same thing, then Rav Chaim knew he was a true student. Second, a student of his shared an original Torah thought, that dovetailed with one of Rav Chaim's ideas, then Rav Chaim felt the joy of knowing he had a true student.
(3) See Koheles Rabbah 1:2, which describes the "seven worlds" of development in a lifetime. Also see Alei Shur, vol. 2, p. 659, for a revealing treatment of this theme.
(4) Rabbi Shlomo Fisher is a rosh yeshiva of Yeshivas Itri, Jerusalem.
(5) See Maharal, Nesivos Olom, Nesiv HaTorah, ch. 4. This idea complements the concept that we were placed in this world to choose correctly. Our ability to do so is the essence of human life. This independence necessitates an "apprenticeship," however, when a young person learns from those older and wiser than he how to make decisions. Parents are his first guides; as such, they essentially prepare him for life.
(6) See Be'er Mechokek (pp. 203-4) where the author, Rabbi Mordechai Katz, (1894-1964) rosh yeshiva of Telz Yeshiva, notes that God allowed the Jewish people to spy out Canaan even though He knew there would be dire consequences.
(7) One of our generation's great Torah educators, Rabbi Shlomo Wolbe, is the author of the widely acclaimed two-volume work Alei Shur.

Changing My Expectations as a Mother during COVID-19

My Father, the Hassid
Where Are We? The Body, Brain, Soul Problem
Dr. Sheila Nazarian’s Escape from Iran
The Miami Boys Choir is Taking over TikTok
Comments
MOST POPULAR IN Family
Our privacy policy
Aish.com Is Looking for Great Writers