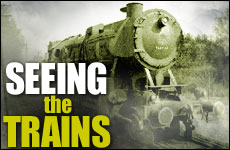 Rabbi Yehudah HaNasi was one of the greatest sages in the history of the Jewish People. An eminent Torah scholar and powerful leader who amassed tremendous personal wealth, he guided the nation right after the destruction of the Second Temple and made the monumentally historic decision to outline the Oral Law in writing for fear of it being lost. He was known simply as Rebbe, or Rabbeinu Hakodesh (Our Holy Teacher).

But when asked how he achieved his greatness, he said, "I saw the back of Rabbi Meir. How much greater would I have been if I had seen him from the front" (Eruvin 13b).

Rebbe attributed his success to merely having seen first-hand the "back" of Rabbi Meir -- the waning years of the great sage of the previous generation. That exposure, by itself, made an indelible impression upon him. He was a qualitatively different person for having experienced the clarity, depth and power one person can possess.

Rabbi Yehudah HaNasi saw the back of Rabbi Meir. The Rosh Yeshiva saw the trains.

The Rosh Yeshiva would often ask us to imagine what we would be like if we were living in Europe during WWII. Would we be the same people after finding out what was going on inside the death camps? How could our lives not be forever changed by seeing the cattle cars go by, day after day, week after week, month after month, filled with human cargo destined for inhumane treatment.

How could we sleep soundly at night as the trains rumbled by, the silent noise of the horrors to come piercing our senses much louder than the metal tracks drumming a steady beat from the weight of the rolling cars? What we would do if we saw the trains?

Wouldn't we be different people? Wouldn't we be obsessed with finding a solution, going to any lengths to try and save our fellow Jews?

The Rosh Yeshiva saw the trains. Rav Noach saw the trains of assimilation; he saw the tens of thousands of Jews throwing away their Jewish lives for the "promise" of a better future -- which guaranteed only that their future generations would no longer be Jewish.

It wasn't just theoretical, or just intellectual with the Rosh Yeshiva. It wasn't just a nice thing to do, or "just" a mitzvah. It was in his bones, in ever fiber of his being. He was a different person because of it.

How could he sleep soundly at night while his fellow Jews slept their way into spiritual oblivion? How could he not be obsessed with finding a solution to save the Almighty's children? It wasn't a question for him, it wasn't even a mission. It was his blood, his oxygen. Not because he needed to, or wanted to. Because he had no choice. He was controlled by his clarity. He saw the trains.

We, his students, knew about the trains, intimately. Many of us were pulled from them, brought back to observant Judaism through the Rosh Yeshiva's clarity and care, his insight, intellect and inspiration. We joined the army and took up the task. We had the responsibility to share with others the beauty of our heritage that was shared with us. We could speak the same language, relate to the same experiences and guide them through the same teshuva process through which we walked.

Sure, we learned his Torah, taught his Torah and internalized his message. Most of all, however, we learned the Rosh Yeshiva. His super-sized fist pounding his desk time and again -- emphasizing a point that was so painfully obvious to him, but also painful to him that it wasn't so obvious to us.

During the two years of the rabbinical program, we had regular meetings in his office, discussing, debating and dissecting the grand points and fine points of outreach. The obligation, as he saw it, was nothing less than Kiddush Hashem, sanctifying God's purpose in this world by restoring the Jewish People to our purpose. Anything less than that was a Chillul Hashem, a desecration of God's purpose.

We Were All His Favorite
The 21st President of the United States: Failure or Inspiration?
Hiding Their Jewishness
The Jewish Pope: Following the Questions Home
Comments