My Uncle, the Rosh Yeshiva 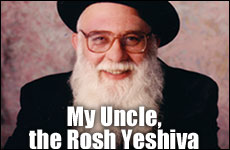 We awaited his 1000 watt smile and his trademark pinch on the cheek that said he truly loved us.

To tens of thousands across the globe, perhaps even hundreds of thousands, he was known by various titles; 'Reb Noach', 'Rabbi Weinberg', or most endearingly, 'The Rosh Yeshiva.' To my family he was simply 'Uncle Noach.' And he was the uncle par excellence. The great master that he was, being the perfect uncle just complemented his totality of greatness.

Ever since my earliest childhood, I have had the fondest memories of Uncle Noach. When my family received the news that Uncle Noach would be staying in our home on yet another of his many, unceasing, fundraising trips, a thrill would descend over all of us. The excitement was palpable: "Uncle Noach's coming!"

We knew that whenever he came it was guaranteed that he would bring a box or two of Entemann's (which was unavailable in our part of town those days), his -- and immensely appreciated -- way of expressing his appreciation to our mother, his hostess. We came to associate him with those donuts.

More eagerly, although we couldn't express it at such a tender age, we awaited his 1000 watt smile, always accompanied by his trademark pinch on the cheek, that positive affirmation, that yes, he was our uncle and truly loved us. There was absolutely no doubting it -- with the fullest purity and innocence as only children can have, we knew, as Uncle Noach would always say "with five-finger clarity," that he loved us. It was with tremendous shock that we grew up to find that other people, seemingly strangers, shared in that feeling of his boundless love. Wasn't he our uncle after all? 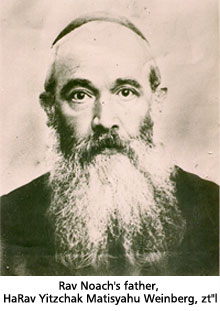 When he would come to our house, we would just sit there and watch him. We could never feast our eyes on Uncle Noach long enough. There was something so comforting in just being in his presence. Even as we got older, we invariably found all sorts of excuses to be around him, to delight in his company for just a little bit longer.

Uncle Noach's shadow was constantly with us. Even when he wasn't physically staying at our house he was a large part of our consciousness: "Rabbi Noah Weinberg was our uncle." Whenever we met an irreligious Jew, a Jew without any awareness of the glory of his heritage, we would invariably sigh, "If only Uncle Noach would be here to help him." There was no doubt that if Uncle Noach would've been there, that Jew would now be fully observant. Yet, at the same time, we knew that Uncle Noach couldn't be there because he was reaching out to Jews in some other part of the world. We knew that Uncle Noach with all of his powers; his charisma, his truth, his stunning clarity, and most importantly, his love, would have brought that poor soul home. Who could withstand Uncle Noach's truth?

Uncle Noach was a tremendous source of pride to our family. Every time we passed an Aish building, saw a poster of an upcoming Aish event, we would be filled with that warm feeling inside: "That's our Uncle!"

Bringing the Prince Back Home

Growing up in a deeply religious home, with my father on the faculty of the Yeshiva, it was a tremendous source of wonder to me: Where did Uncle Noach fit in? As far as I know, Uncle Noach was the first person to actually be totally occupied in outreach and also carry the title 'Rosh Yeshiva.' That was a revolution. Outreach is one thing, but can one classify it as a Yeshiva?

I came to realize my quandary was due to pure ignorance. Our sages teach us that our forefathers always had Yeshivas. Our forefather Abraham had a Yeshiva. The Chasam Sofer writes (in Pittuchei Chosam, shu"t, CHS Yore Deah -- I originally heard this Chasam Sofer from Uncle Noach himself) "Why is that we find Abraham to be the first person to be called by God "My lover – 'Avraham Ohavi'"? He certainly wasn't the first person since creation to attain virtuousness. We find the Torah telling us about Chanoch, who attained such a high spiritual level that he actually purified his soul to such an extent as to cause it's dissolution from his physical body; he achieved total purity. Yet we do not see the Almighty calling him "My lover."

Uncle Noach knew that we are all princes, and he undertook to bring us all back.

The answer, the Chasam Sofer tell us, was Abraham's true greatness. Abraham realized that for a person to raise his own soul to the heavens while leaving the rest of mankind in the dirt, for that God did not have to create an entire universe with thousands of inhabitants. A true lover of the king is not content with his own individual worship. His tremendous love for the king instills an even greater desire to acquire for the king additional worshippers, even more citizens to accept the sovereignty of the king. Reaching the ultimate spiritual heights requires elevating the rest of the kingdom, not just oneself.

Uncle Noach was certainly a 'lover.' My father taught the students who had the good fortune to come to the Yeshiva, implanted them with Toras Chaim, fed them the fruits of The Tree of Life. And Uncle Noach took the Yeshiva one step further, to the rest of the kingdom. I have no doubt that the Almighty is now saying "Noach Ohavi," – Noach, My lover -- the ultimate achievement, plain and simple.

But there was more than Uncle Noach's love for the Creator; he loved each and every single one of us. As the Mashgiach of Lomza writes, if one would happen to stumble upon the Crown Prince lost, lying in the mud, no matter how helpful he can possibly be, the greatest service must certainly be to bring the Prince back home. Who can be more loving and caring than the king? Who is in a better position to nurture the prince, than his own father?

Uncle Noach knew that we are all princes, and he undertook to bring us all back, as much as humanly possible. As Uncle Noach always said, "The Almighty is always waiting there to help you, you just have to try your hardest."

Uncle Noach was like a boundless stream, clearly connected to the Source.

Uncle Noach always had a chuckle on his lips. This mirth that was to become his trademark. Where did this great joy, the pure pleasure of being alive, emanate from? As a child, I always took his greatness for granted; he was simply just blessed by the Creator with a pure soul. My grandfather constantly related to all, that his father was fond of saying that beginning already from Uncle Noach's birth, it was clearly evident that he had an extremely special soul. As an adult I came to appreciate the tremendous growth involved. As the Mishna in Ethics of the Fathers tells us, "Whoever learns Torah with the proper intentions achieves the greatest heights... he is called Beloved by the Creator, Beloved by mankind, makes his Creator joyous, makes mankind joyous... and is compared to an overfilling, boundless stream." Uncle Noach was a living embodiment of this Mishna. What is the power of the stream? It's source. Uncle Noach was clearly "connected." Whoever met him instinctively realized it. Uncle Noach's tremendous search and drive for only the truth, the pure truth, gave him 'his' 48 ways to wisdom. To truly acquire Torah. To make it a 'possession' of his.

My eyes are swollen with tears. "Uncle Noach you are not here with us anymore down below. Who will take the rest of God's children out of the mud?

Rabbi Raphy Garson relates: "During a study session at Aish some 15 years ago, I recall commenting to Reb Noach, 'You have a great office with such a view overlooking the Kotel.' He told me, 'You work for God -- He gives you an office!'" Uncle Noach would constantly remark that the entire new building facing the Western Wall was an open miracle, a clear manifestation of God's love for His people. If, already in this world the Almighty was showing us all His love for Uncle Noach presenting him with such an office, probably the most coveted office in the world, can we imagine his 'office' up in Heaven?

The prayer is on all of our lips; "Uncle Noach finalize the job that you, and only you, did in total devotion, utmost selflessness: Go in front of God's Heavenly Throne, and tell Him 'I did my part, please Almighty bring all your children home.'"

May his memory be a blessing, and a constant source of inspiration for all of us who can continue his legacy in any form whatsoever. The true comfort is only from the Almighty, as the prophet tell us "And my Lord, Hashem, will erase the tears from all the faces."

What the Angel Taught Me

Rav Noach's Students Remember, Part 4
Vayelech 5783: Regret and Repent
Rabbi Sacks: Focus On the Important, Not the Urgent
Put Your Foot Down: Are Human Feet Poorly Designed?
Comments
MOST POPULAR IN Rabbi Noah
Our privacy policy
Aish.com Is Looking for Great Writers