Confessions of a Laugh Addict 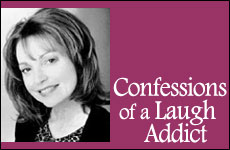 It's true -- I am addicted to laughs. But to the old fashioned kind.

Hi. Welcome to Laughaholics Anonymous. My name is Melanie and I nearly died laughing. This program taught me balance and moderation, cuz baby, there was a time I was a hardcore humor junkie.

I started small, real small. My cradle. It was way too easy. I was sobbing fitfully in little crybaby gasps over some minor diaper issue, Mom squeezed my rubber ducky, it went "squeak, squeak!" my gasps turned to giggles and I was gone, man. An innocent kid, hooked for life. Sob to giggle is a very, very short step, having to do with the simple replacement of an inhalation with an exhalation. It was way too easy. Thereafter, I started seeking fixes from wherever I could get ‘em.

It wasn't hard in a Jewish household. My family, like so many of our brethren from the Old World, endured their historic lack of popularity by ridiculing themselves. "If you can't beat em, join em," seemed to be the prevailing wisdom.

My family, like so many of our brethren from the Old World, endured their historic lack of popularity by ridiculing themselves.

"I'm so fat that when I sit around the house, I sit AROOUUUNUND THE HOUSE!" my uncle would kvell. "No, I don't have a head on my shoulders -- my neck is just blowing bubbles," my cousin would whine. Killed us! These outbursts of addictive humor were especially common at mealtimes, where spewed food appearing on other faces, or beverages fountaining up and out the nostrils only heightened the hilarity further.

It was the family problem. All the neighbors knew. Hearing the uproarious laughter booming out of our house late into the night, they clucked their tongues and called us shameless behind our backs....which made us laugh even more! Maybe we weren't the richest family in town, but we had a darn good time!

When I matured and left home, I found it hard to function in the humorlessly real world of the late 60's. The Vietnam War, the incident at Kent State. That stuff wasn't very funny. For a while there seemed to be a laughter shortage. We started a humor conservation club. Friends and I would gather and tell a precious joke in a small room so as not to waste any. We'd inhale each other's laughs, recycle 'em and laugh again. I started going to some mighty tough areas to get laughs, too -- dinner theaters, nightclubs, nice Jewish guys' mothers' apartments. I'll admit it -- I was lured by a few giggles into some not so funny situations.

When I tried to be a stand up comic myself, I was never satisfied with mere chortles, chuckles, titters or guffaws. I was hungry for the big stuff, the good stuff. I wanted boffo, pants-splitting, weep-reaping, soda-spitting, fall flat on the floor funny. I felt a failure for the mere amusement I provided. I knew I didn't have it to be a big time laugh peddler.

Now I watch addicts at the local clubs, at the Comedy Central tapings, so desperate for laughter that they think they can jump start it by ‘hooting" at an off color comedian. They all need a good squeeze toy, in my opinion. Poor things have forgotten how to laugh.

In this era which lacks a sense of humor, real laughter is hard to get. We need our limited air for other things like breathing. Hence the advent of the "dramedy" on television. But, c'mon. how can shows "Ally McBeal," or "Desperate Housewives" (and I've acted on them so I know) be nominated for Emmys for best comedies? Hah! Don't make me laugh. People are so starved for humor that they mistake over the top attention getting for funny. But do you really laugh aloud watching "Ugly Betty?" Just listen to yourselves! Sitting in your parlors alone, does one itsy bitsy snicker or drop of spittle emit from your laughing mouth? I think not!

So, just as the world is making it difficult for smokers to maintain their habit, the laugh habit is something I'm having to control. "No laughing!" signs, with the X through the smiling mouth are pervasive. I sublimate with socially appropriate pacifiers like sugarless gum, tongue texting, and, in the privacy of my home, thumb sucking, but they all have side effects and costs. I feel cheap, degenerate, ashamed. They will just never be the same high as sheer mirth.

I know I'm being radically unorthodox here, but I feel when times are tough we all deserve a hearty laugh. Let's agree to meet in speakeasy, laugheasy places like this one and tell a few from time to time, okay?

Laughter is still the best addiction and the best medicine a person could have, with no side effects...except the occasional stains and spills.

The Band's Visit
For Every Individual, A Torah Scroll
Allegiance To The Monarch
Meet the Real You: Yom Kippur
Comments
MOST POPULAR IN Jewlarious
Our privacy policy
Aish.com Is Looking for Great Writers