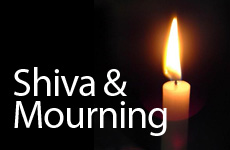 The Jewish stages of mourning raises one from the abyss of despair to the normalcy of daily life.

Judaism, with its long history of dealing with the soul of man, its intimate knowledge of man's achievements and foibles, his grandeur and his weakness, has wisely devised a system of graduated mourning periods. During this time, the mourner may express his or her grief and release, with calculated regularity, the built-up tensions caused by bereavement.

The Jewish religion provides a beautifully structured approach to mourning which is divided into five stages.

This is the period between death and burial when despair is most intense. At this time, not only the social amenities, but even major positive religious requirements are canceled in recognition of the mourner's troubled mind.

This period consists of the first three days following burial, days devoted to weeping and lamentation. During this time, the mourner does not even respond to greetings, and remains in his home (except under certain special circumstances). It is a time when even visiting the mourner is usually somewhat discouraged, for it is too early to comfort the mourners when the wound is so fresh. During this time, the mourner remains within the house, expressing his grief through the observances of wearing of a torn garment, sitting on the low stool, wearing of slippers, refraining from shaving and grooming, and recital of the Kaddish (see below).

This stage covers the seven days following burial and includes the three-day period of lamentation. During this time, the mourner emerges from the stage of intense grief to a new state of mind in which he is prepared to talk about his loss and to accept comfort from friends and neighbors.

The world now enlarges for the mourner. He continues the observances outlined in the second stage above, but he is able to interact with acquaintances who come to his home to express sympathy in his distress.

A sacred obligation devolves upon every Jew to comfort the mourners.

A sacred obligation devolves upon every Jew – no matter his relationship to the deceased or to those mourning – to comfort the survivors – these being father, mother, wife (or husband), son, daughter, (married or unmarried), brother, and sister (or half-brother and half-sister) of the deceased.

In Judaism, exercising compassion by paying a condolence call is a mitzvah, considered by some of our greatest scholars to be biblically ordained. It is a person's duty to imitate God: as God comforts the bereaved, so man must do likewise.

The fundamental purpose of the condolence call during shivah is to relieve the mourner of the intolerable burden of intense loneliness. At no other time is a human being more in need of such comradeship.

The inner freezing that came with the death of his relative now begins to thaw. The isolation from the world of people and the retreat inward now relaxes somewhat, and normalcy begins to return.

This period consists of the 30 days (counting the seven days of shivah) following burial. The mourner is encouraged to leave the house after shivah and to slowly rejoin society, always recognizing that enough time has not yet elapsed to assume full, normal social relations.

Shaving and haircutting for mourners is still generally prohibited, as is cutting the nails, and washing the body all at once for delight (as opposed to washing for cleanliness which is required).

The fifth stage is the twelve-month period (counted from the day of burial) during which things return to normal, and business once again becomes routine, but the inner feelings of the mourner are still wounded by the rupture of relationship with the loved one.

The observance that most affects the daily life of the mourner during the twelve-month period is the complete abstention from parties and festivities, both public and private. Participation in these gatherings is simply not consonant with the depression and contrition that the mourner experiences.

It is absurd for the mourner to dance gleefully while his parent lies in a fresh grave.

It borders on the absurd for the mourner to dance gleefully while his parent lies dead in a fresh grave.

Thus, the Sages decreed that, while complete physical withdrawal from normal activities of society lasts only one week, withdrawal from joyous, social occasions lasts thirty days in mourning for other relatives, and one year in mourning for one's parents. Joy, in terms of the mourning tradition, is associated largely with public, social events rather than with personal satisfactions.

At the close of this last stage, the bereaved is not expected to continue his mourning, except for brief moments when yizkor or yahrzeit (see below) is observed. In fact, Jewish tradition rebukes a man for mourning more than this prescribed period.

The Kaddish is recited at every prayer service, morning and evening, Shabbat and holiday, on days of fasting and rejoicing.

The period that the mourner recites the Kaddish for parents is, theoretically, a full calendar year. The deceased is considered to be under Divine judgment for that period. Some communities, therefore, adhere to the custom that Kaddish be recited for 12 months in all cases.

However, because the full year is considered to be the duration of judgment for the wicked, and we presume that our parents do not fall into that category, the practice in most communities is to recite the Kaddish for only 11 months.

The Kaddish is to be recited only in the presence of a duly constituted quorum, a minyan, which consists of ten males above the age of Bar Mitzvah. If there are only nine adults and one minor present, it is still not considered a quorum for a minyan.

Yizkor is a ceremony recalling all the deceased during a communal synagogue service. Yahrzeit is a personal memorial anniversary; it may be observed for any relative or friend, but it is meant primarily for parents.

The Yizkor service was instituted so that the Jew may pay homage to his forebears and recall the good life and traditional goals. This service is founded on a vital principle of Jewish life, one that motivates and animates the Kaddish recitation.

It is based on the firm belief that the living, by acts of piety and goodness, can redeem the dead. The son can bring honor to the father. The "merit of the children" can reflect the value of the parents.

This merit is achieved, primarily, by living on a high ethical and moral plane, by being responsive to the demands of God and sensitive to the needs of one's fellow man. The formal expression of this merit is accomplished by prayer to God and by contributions to charity.

Yahrzeit is a special day of observances to commemorate the anniversary of the death of parents. Though the word is of German origin, the custom is outlined in the Talmud.

This religious commemoration is recorded not as a fiat, but as a description of an instinctive sentiment of sadness, an annual rehearsing of tragedy, which impels one to avoid eating meat and drinking wine – symbols of festivity and joy, the very stuff of life.

How to Pay a Proper Shiva Call

The Jewish View of Cremation

ABCs of Death & Mourning
The Miami Boys Choir is Taking over TikTok
Caramelized Onion and Pumpkin Pirozhki
For Every Individual, A Torah Scroll
Comments
MOST POPULAR IN Lifecycle
Our privacy policy
Aish.com Is Looking for Great Writers